Are there irreducible polynomials with all zeros on two concentric circles?

This is somewhat similar to this recent question, but extending in a different direction.

Let $f(x)$ be an irreducible polynomial of degree $n$ with integer coefficients. Call such $f$ a bicycle polynomial if all its roots are located on two circles around $O$, i.e. all roots have one of two moduli. (Of course we'll exclude polynomials of cyclotomic type like $\Phi_n(mx)$ for $m\in\mathbb Z$, which have all their roots fit on one circle.)

Now: except replacing the "$-1$" by any other nonzero integer, those types of constructions already seem to be about all of it...

Assuming the existence of such a polynomial, it appears (?) to boil down to the existence of a degree $m$ polynomial ($m>3$ odd) with $m-1$ roots on one circle. This circle must presumably have an irrational radius because of what is known about Salem polynomials, but I'm stuck here.

Dubickas and Smyth (On the Remak Height, the Mahler Measure and Conjugate Sets of Algebraic Numbers Lying on Two Circles, 2001) discuss what they call extended Salem numbers.

Moreover, they present results in the direction about which you ask, i.e., conditions under which certain conjugates all fall on two (not one) circles, thereby forcing their associated minimal polynomial to have its degree divisible by either 3 or 2 in parts (a) and (b), respectively. 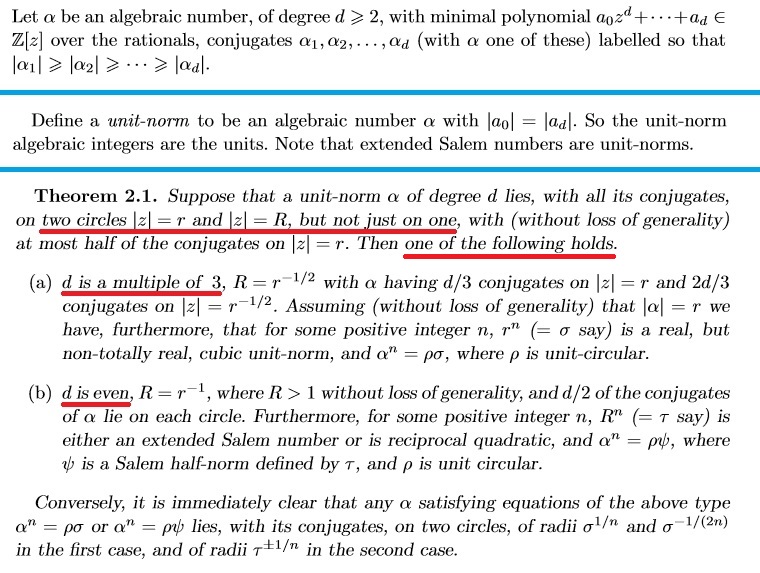 In the link above, you can find a discussion of extended Salem Numbers and more. 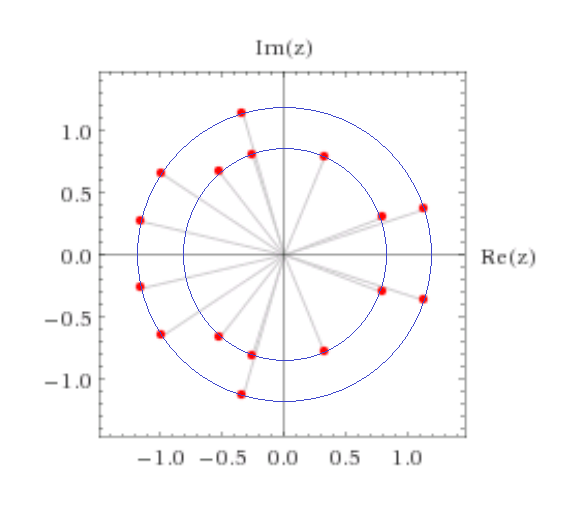 Not the answer you're looking for? Browse other questions tagged nt.number-theory cv.complex-variables polynomials galois-theory or ask your own question.

24
Monic polynomial with integer coefficients with roots on unit circle, not roots of unity?
5
$n$ groups of $n$ queens on a toroidal chessboard
16
Aligned roots of irreducible polynomials
12
How to best distribute points on two concentric circles?

12
How to best distribute points on two concentric circles?
24
Monic polynomial with integer coefficients with roots on unit circle, not roots of unity?
2
Is there an irreducible integral polynomial in two variables which is reducible for every value of one of the variables?
405
Why do roots of polynomials tend to have absolute value close to 1?
6
Which criteria for "uniformly splitting" polynomials?
10
Kronecker polynomial or not?
8
Polynomials with all but one root inside the unit disc
28
All polynomials are the sum of three others, each of which has only real roots
Question feed