How can I prove that these two graph coloring problems are polynomial time equivalent?

Given a graph $G(V,E)$. The standard $k$-coloring problem consists in finding a feasible coloring (no two adjacent nodes share the same color) of the nodes with $k$ colors. Let this problem be $P_1$.

A $\theta$-improper coloring of $G$ is a coloring where each node can have at most $\theta$ neighbors with the same coloring.

where $N(v)$ denotes the adjacent vertices of $v$, and $c(v)$ denotes the color of vertex $v$. Note that this definition generalizes $\theta$-improprer colorings (chose weights equal to 1), and standard colorings (…and chose $\theta=0)$. Let this problem be $P_2$.

In other words, given a weighted digraph $G(V,A,\omega)$, how can one find a weighted $\theta$-improper $k$-coloring of $G$ with a procedure that solves the standard $k$-coloring problem?

A sketch of the reduction from NAE 3-SAT to unweighted $\theta=1$ improper 2-coloring of undirected graphs is the following [NOTE: I quickly made it for exercise, so it can be wrong or probably the result is already known]. 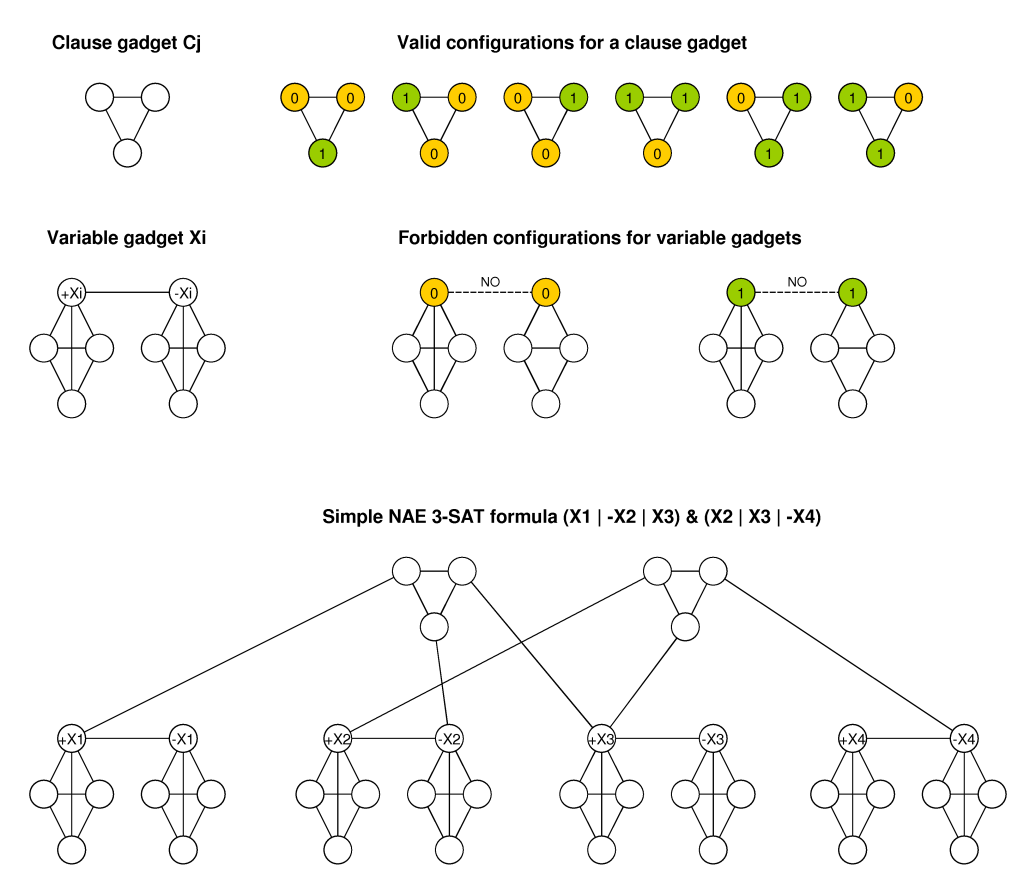 The NP-completeness of weighted $\theta = 1$ improper 2-coloring of directed graphs follows from:

Don't know how the simplest "manual" reduction would look like.

One possible approach is convert improper coloring to SAT (say with a tool like CBMC) and then convert SAT to coloring.

Not the answer you're looking for? Browse other questions tagged co.combinatorics graph-theory computational-complexity graph-colorings or ask your own question.

2
Isomorphism of connected, rigid, N-regular graphs with chromatic index N?
1
Strategic vertex labeling
6
Find multiple non-adjacent paths in a graph
8
Is this problem on weighted bipartite graph solvable in polynomial time or it is NP-Complete
2
Complexity of a variant of Four coloring theorem
17
Graph that minimizes the number of b/w colorings where white vertices have an odd number of black
2
Min-sum and min-max node-disjoint path problems
Question feed