Variation on a matrix game

"Alan and Barbara play a game in which they take turns filling entries of an initially empty 2008×2008 array. Alan plays ﬁrst. At each turn, a player chooses a real number and places it in a vacant entry. The game ends when all the entries are filled. Alan wins if the determinant of the resulting matrix is nonzero; Barbara wins if it is zero. Which player has a winning strategy?"

It's not hard to see that Barbara can win this game by reflecting Alan's moves over a vertical line. (In fact, you might say she "wins with multiplicity 1004".) My question is, what if the goals were reversed? That is, suppose Alan (the first player) wants the determinant to be zero, and Barbara wants it to be nonzero. Now who has the winning strategy?

If you expect the result to rely solely on parity, then you should note that Alan wins in the 2×2 case, because he can force a row or column to have only zeroes. Unfortunately, it's not at all clear (to me, anyway) that he can do anything similar to a 4×4 matrix, let alone a 2008×2008 one.

I also can't do the entire problem, but I can handle a more general case than the other answer: Barbara wins if Alan plays only 0s on a board of the form (4n)x(4n). (This is more general because it considers all possible ways of having 0s force a determinant to be zero, not just rows and columns. Admittedly, it's less general because it requires more of the size of the matrix.)

First, consider the 4x4 case. Label the matrix as follows:

This pairs up the entries of the matrix. Then, Barbara's strategy is fairly easy: play in the matching pair of wherever Alan plays. One can check that no matter how Alan plays, there will be four entries of Barbara's whose product contributes to the overall determinant. If Barbara plays algebraically independent entries, then this implies the entire determinant is nonzero.

Extending this to (4n)x(4n) is fairly easy. Make n 4x4 blocks along the diagonal of the big matrix. If Alan plays in one of them, Barbara plays by the above strategy locally. If he plays in an off-diagonal block, Barbara simply helps Alan by playing 0 in that block. The end result will be a block diagonal matrix with nonzero determinant.

While I still can't answer in the general case, in the case where n > 2 and Alan moves only with 0 in attempt to fill a row or column with 0s, he cannot win.

This proof is written semi-informally for ease of reading.

Define a set R which contains, for each unblocked row, the number of 0s on that row.

Define a set C which contains, for each unblocked column, the number of 0s on that column.

The game begins with both R and C as the empty set. 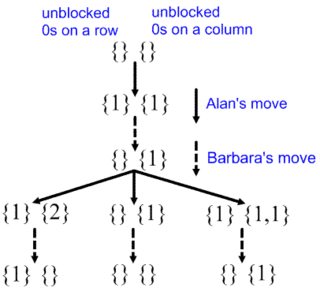 The situation if the 0s are at B and C is symmetrical.

Here's an almost-proof of parity which I believe makes the situation clearer.

Starting with the equation where the determinant is set to zero,

If n is even, the last move is Barbara's so she wins, if n is odd, it is Alan's so he wins.

Not the answer you're looking for? Browse other questions tagged linear-algebra matrices combinatorial-game-theory or ask your own question.