A problem of potential theory arising in biology

Same question can be asked with more than two sets, but there are counterexamples with many balls $K_j$, even of equal radii: this is called a "Faraday cage".

Comments. This problem originates in the attempts of biologists to explain why certain animals (like armadillos) group close together when they sleep. In this model, $K_j$ are the animals with body temperature $1$, while the medum has temperature $0$. Then $u$ is the time independent temperature near the bodies, and $r_j$ is the rate of heat loss. Presumably moving closer together desceases the rates of heat loss $r_j$. It is easy to prove that the TOTAL heat loss of the group $r_1+r_2$ decreases when we move animals $K_1$ and $K_2$ closer together, see http://www.math.purdue.edu/~eremenko/dvi/armadillo.pdf and references there. But each individual animal $K_j$ feels only his own $r_j$, not the sum. Also some condition of convexity type is indeed needed here; think of a kangaroo putting her child in the bag. This decreases the heat loss by the child but (slightly) increases the cooling rate of the mother.

The problem is unsolved even when $K_0$ and $K_1$ are two balls of different radii. In this case one can obtain $r_k$ as infinite series of functions of the distance, but these series are alternate and it is unclear how to show that they are monotone.

EDIT. By "Faraday cage" I mean the following. Take a spherical shell of the form $1-r\leq |x|\leq 1$, $r$ is small, and break it into little convex pieces of size approximately $r$, with some space between pieces. These pieces are $n$ animals. The temperature they create is approximately the same as the shell itself would create, which is almost constant $1$ inside, and almost $1/|x|$ outside. Consider a new animal of the same size outside. It slightly decreases the heat loss by some animals on the shell close to it. Now move the same animal inside. It will have no effect at all on the shell animals.

This is the same principle as kangaroo bag, I just broke the bag into many small convex pieces. More careful argument shows that the animals can be balls of the same radius here. (Faraday's own cage does the same with electric field which satisfies the same equation).

The answer is negative. 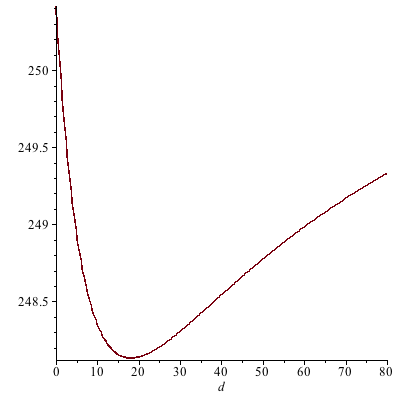 Also based on numerical computations if $\frac{r_{0}}{r_{1}} > \ell$ then the nonzero distance that the big ball has to keep approximately equal to $r_{0}$. The heat loss of the small ball is always monotonically increasing.

Not the answer you're looking for? Browse other questions tagged potential-theory heat-equation or ask your own question.