Want to improve this question? Add details and clarify the problem by editing this post.

For a long time I was looking for a numerical system that would allow to compare infinite sets. In contrast to Cantor's approach that empathizes the possibility of on-to-one correspondence between sets, I want that adding an element to even an infinite set should increase its "quantity" and removing an element should decrease. For instance, 1,2,3,4,5... should have greater quantity than 1,2,4,5... Similarly I want more dense sets having greater quantity, that is, 1,2,3,4,5... having greater quantity than 1,3,5,7... and slmaller than 1,3/2,2,5/2,3,...

This way I came to the following considerations.

Now we introduce the notion of quantity of a subset of real numbers q(S).

Given these properties, lets find the quantity of the natural numbers $q(\mathbb{N})$.

Here are some other examples:

Now we define that to any divergent series there corresponds a non-standard number. The standard part of that number is given by the Ramanujan's sunmmation of the series.

Insight on exponentiation of non-standard numbers

Examining the Faulhaber's formula for Ramanujan's summation one can come to the following striking insight on the exponentiation of non-standard numbers.

Given that Bernoulli numbers can be expressed through Hurwitz Zeta function, we can generalize:

This allows to represent zeta function in exponential form:

Moreover, now any series containing Bernoulli numbers can be represented as power series over non-standard numbers.

Connection between trigonometric functions on hypernumbers

Given the above definitions, we have a lot of relations between trigonometric functions, for instance,

Some sets and their quantities: 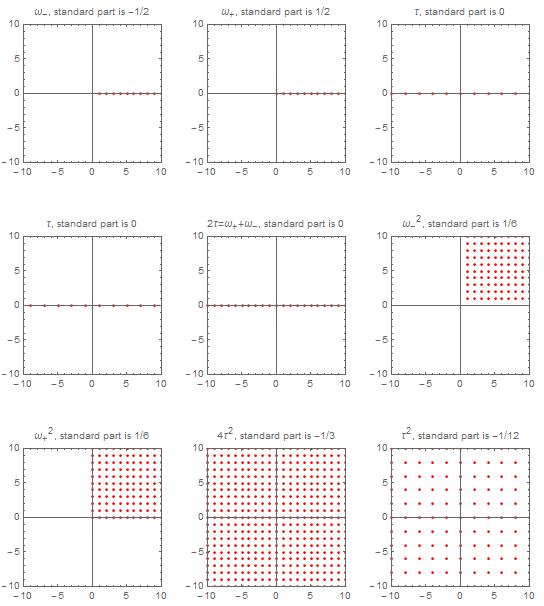 Now I have the following questions

It looks like your notion of "non-standard part" is a weighted asymptotic density, and the "standard part" describes constant correction terms to a smoothed sum. You can find an explanation of a connection to the Riemann zeta function at Terry Tao's blog and at Wikipedia.

83
Why do Bernoulli numbers arise everywhere?
66
Why does the Gamma-function complete the Riemann Zeta function?
40
What does the generating function $x/(1 - e^{-x})$ count?
16
Comparing sizes of sets of natural numbers
40
What is known about the sum x^{n^2}/n?