Three involutions on the set of 6-box Young diagrams

Question 1: are these the same?

Question 2: is there some easy way to look at a 6-box Young diagram and see what Young diagram you get when you apply either of these involutions?

It is easy to see that this pictorially obvious involution is neither of the other two involutions. Each column in the Young diagram corresponds to a cycle in the cycle decomposition of a permutation, so diagram 1 corresponds to the conjugacy class of the permutation

that is, the conjugacy class of the identity, with just one element---this is the smallest conjugacy class. So, the outer automorphism of $S_6$ can't switch these.

which is consistent with

which is consistent with

Here we know that not all pairs of equal dimension get switched by the outer automorphism, since the trivial representation is mapped to itself (and therefore so is the sign representation). What happens to the 4 representations of dimension 5?

I apologize for being too lazy to match up the cardinalities and dimensions to the Young diagrams. 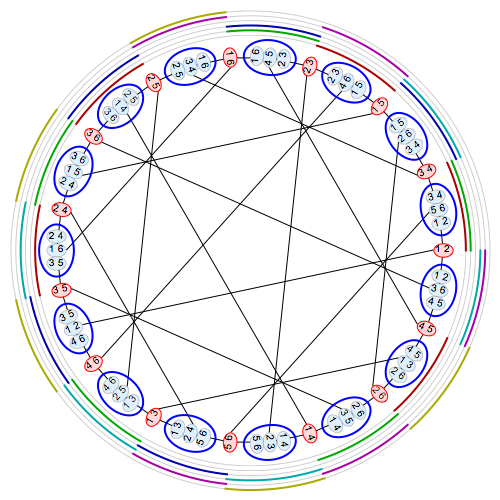 The only other classes sharing a common size are $(4)$ and $(4,2)$ but these turn out to be fixed. (I've included a proof below.) From the character table and the equation $\chi^t(g^t) = \chi(g)$ one then gets the action on characters:

Incidentally, this gives a nice way to construct the 'exceptional' reflection representations labelled by $(3,3)$ and $(2,2,2)$: just apply $t$ to the natural permutation module, and take the non-trivial constituent.

As expected from Brauer's Permutation Lemma, the actions of $t$ on conjugacy classes and characters have the same cycle type.

Not the answer you're looking for? Browse other questions tagged gr.group-theory rt.representation-theory finite-groups or ask your own question.