What algebraic structures are related to the McGee graph?

Recall that an $(n,g)$-graph is a simple graph where each node has $n$ neighbors and the shortest cycle has length $g$, while an $(n,g)$-cage is $(n,g)$-graph with the minimum number of nodes. 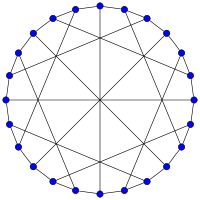 What about the McGee graph? All I know is what I read:

Is this graph associated to an interesting finite geometry, or not? 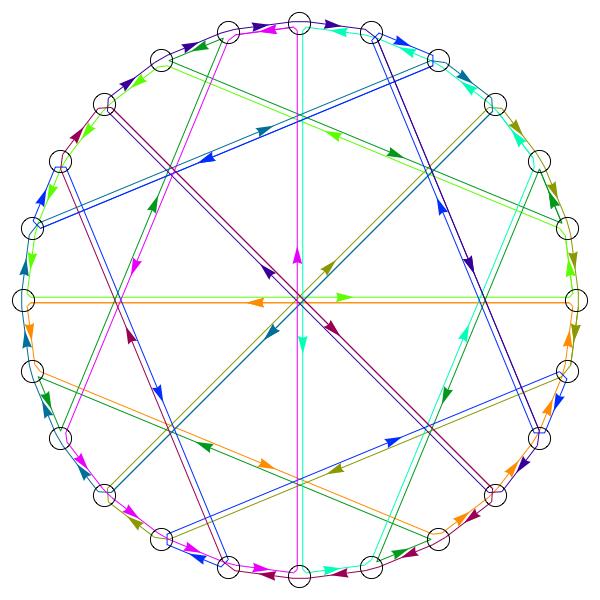 The image above shows how to embed the McGee graph into a surface of genus 2. There are 10 oriented cycles here (8 of length 7, and 2 of length 8) which contain each edge twice with opposite orientations. So the Euler characteristic of the oriented surface in which the graph is embedded here is $\chi=24-36+10=-2$, and its genus is $g=2$.

We can prove that this is the minimum genus as follows:

Suppose we've embedded the graph in an orientable surface, so that the surface is decomposed into $F$ regions. These regions might not all be simply connected, so in general we will say that each has $b_i$ connected components to its boundary, and the $j$th connected component of the boundary of the $i$th region is comprised of $n_{i,j}$ edges of the graph, forming a cycle of the graph.

Since each of the 36 edges of the graph appears twice in these boundaries, we have:

But the smallest cycles in the graph have length 7, so:

Since the $b_i$ are integers, it follows that:

If the total number of holes in all the regions is $H$, we have:

A division of the surface into $F$ regions with a total of $H$ holes can be converted into a division into $F$ simply connected regions by adding $H$ additional edges, without changing the number of vertices (e.g. an annulus can be converted into a disk by adding one edge). Counting these $H$ supplementary edges in addition to the $E$ edges of the graph, we have the Euler characteristic for an orientable surface of genus $g$:

So the genus of the surface must be at least 2, and $g=2$ is only possible when $H=0$ and the surface is divided into $F=10$ simply connected regions.

There is also a nice, symmetrical embedding of this graph into a surface of genus 3: 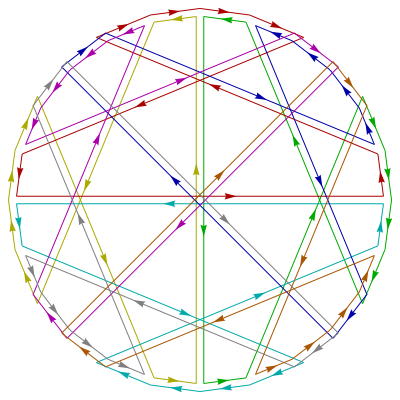 The image above shows 8 oriented 9-gons, arranged so that pairs of oppositely-oriented edges from different 9-gons form the edges of the McGee graph. So the Euler characteristic of the oriented surface in which the graph is embedded here is $\chi=24-36+8=-4$, and its genus is $g=3$.

Any dihedral symmetry of the original planar embedding of the graph just permutes these eight 9-gons among themselves. The other graph automorphisms give different 9-gons on the planar embedding, for example: 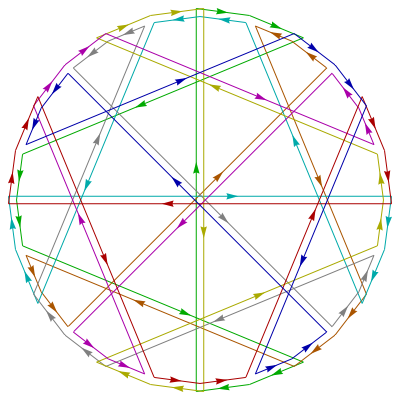 The Riemann surface for the genus 3 embedding looks like this: 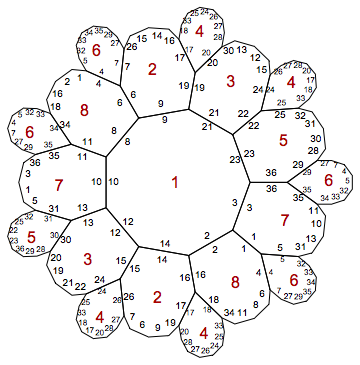 where edges and faces with the same numbers should be identified. The complete symmetry group of this surface is the 16-element dihedral group, with the orientation-preserving symmetries giving an 8-element cyclic subgroup.

This is not an answer, only an illustration. I tried to find a maximally symmetric embedding into 3-space.

It might be viewed as an embedding into a solid torus, with two disjoint 8-cycles on the surface and 8 vertices in four $\boldsymbol\rangle\!\!\!\boldsymbol-\!\!\!\boldsymbol\langle$-like shapes inside the torus.

Motion realizes an automorphism of order 8 (image of the embedding coincides with itself after every $\frac\pi2$-turn; after $2\pi$ one gets a nontrivial involution).

Many thanks to Simon Rose for immediately noticing that my first attempt was obviously rubbish.

Thanks to Gordon Royle's help, Greg Egan and I were able to work out some of the algebraic structures related to the McGee graph. I explained them here:

certainly Sage(math) can easily compute the structure of this group:

Not the answer you're looking for? Browse other questions tagged graph-theory finite-groups or ask your own question.

28
Is the Rado graph a Cayley graph? If so, what is the group like? (And other questions…)
8
A hypercube-related graph
4
Graph connectivity related game
1
What graph invariants are fast to compute?
3
Graph transformation related to graph isomorphism
9
How to characterize “matching-transitive” regular graphs?
Question feed