Let $S$ be a certain family of geometric objects (e.g, the family of unit squares).

Define the overlapping number of $S$ as the the maximum number of nonoverlapping elements of $S$ that can overlap one element of $S$.

Obviously, the overlapping number is not larger than the kissing number since, if the central object has to be overlapped (not only touched), there is less room for the peripheral objects.

What else is known about the relation between the kissing number and the "overlapping number"? In particular, is there any bound on the ratio: kissing-number/overlapping-number?

EXAMPLE: When $S$ is the family of axis-parallel unit-squares, the overlapping number is 4 and the kissing number is 8. So the ratio is 2.

Contrary to your claim, the overlapping number $N$ can exceed the kissing number $K$. Moreover, there exists some fixed value of $K$ for which $N$ can be arbitrarily large.

This is a sketch of a proof, which I haven't attempted to make rigorous because it would be incredibly tedious to do so.

We shall define an $N$-nematode to be a compact subset defined in polar coordinates by: 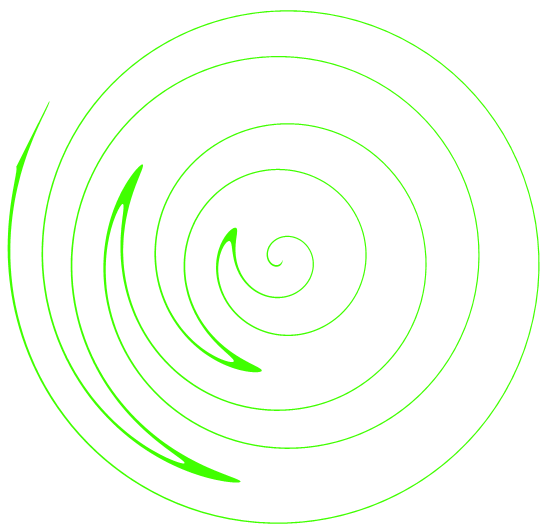 (It has a small ball of radius $\varepsilon$ removed from the centre, which you can't see in the diagram because $\varepsilon$ is microscopic.)

Clearly, $N$ $N$-nematodes can coexist in a 'family', where each nematode touches two others, and their non-overlapping union is the entire annulus. This time, I've made the $\varepsilon$-hole visible: 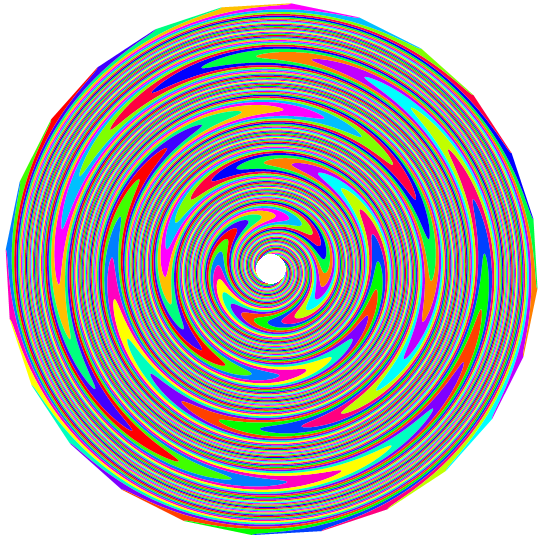 Now, provided we make the nematodes really pathological (for example, if the function $f$ violently oscillates sinusoidally between $\pm \Omega^7$ a total of $\Omega^{13}$ times, where $\Omega$ is the reciprocal of $\varepsilon$), then a nice property emerges. Specifically, the centres of any two non-overlapping nematodes must be either distant (greater than $2 - \varphi$) or incredibly close (within $\varphi$ of each other), where $\varphi \ll \dfrac{\varepsilon}{N}$. Basically, nematodes are either disjoint in the way that discs are, or are almost concentric.

So in any arrangement of non-overlapping nematodes, the nematodes cluster into sets of cardinalities $\leq N$. Now, for a given nematode $\nu$, we can easily bound the following quantities:

This gives a universal bound (independent of $N$) on the kissing number $K$ as $2 + 7 \times 3 = 23$. And we can easily get an overlapping number of $N$ by arbitrarily and effortlessly dropping a nematode $\nu$ onto a family of $N$ nematodes, where the distance between the centre of $\nu$ and the centre of the family is $1$.

35
The kissing number of a square, cube, hypercube?

35
The kissing number of a square, cube, hypercube?
7
Kissing Number of Spheres in Non-Euclidean Geometry
11
Needle probing for a convex body
5
cover and hide with squares
20
Is there always a maximum anti-rectangle with a corner square?
10
Defining Euler's number via elementary euclidean geometry (and a dimension limit)
7
Upper bound of the kissing number in n dimensions
Question feed