How is differential geometry used in immediate industrial applications and what are some sources to learn about it?

Intuitively it might be clear that differential geometry is a very applicable subject in engineering and industry. I'd like to know how some industries/companies use differential geometry. I'd guess they'd be working on geometric modeling OR geometric data analysis. But I'd appreciate if someone can give some explicit examples, and also maybe point out some resources to learn more in that direction.

The only part I'm aware of is that differential geometry is used in medical imaging, computer vision, computer graphics research, where certain models use specific manifolds (shape manifolds for example). But other than that, I've really no idea how say the certain concepts like parallel transport or exponential maps get used in direct industrial applications. Also, if they are indeed used, what kind of Riemannian manifolds do they consider?

Any pointers and resources would be greatly appreciated!

You might explore the Institute of Geometry at Graz Tech Univ, emphasizing free-form surfaces in architecture, and the Industrial Geometry group at Vienna Tech Univ. Both rely heavily on deep knowledge of differential geometry. 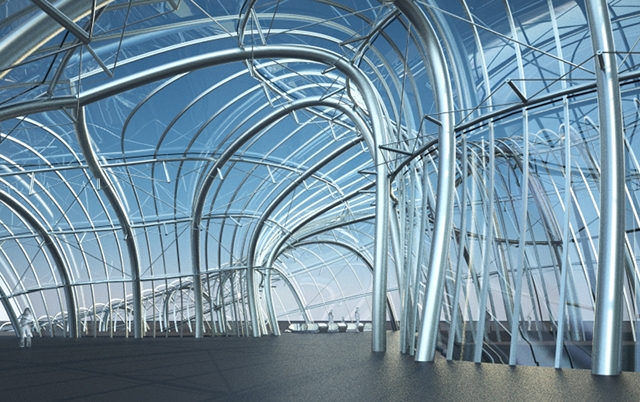 Some of the best numerical algorithms for solving partial differential equations are based on the de~Rham and the Koszul complex greatly generalising and stabilising finite element methods. This is the kind of mathematics that was invented for algebraic topology, and differential and algebraic geometry. It is a great example why barriers between pure and applied mathematics are counter productive.

or the more readable Bulletin Article:

Of the several books of Pogorelov on the subject, one has been translated into English:

Stability of shells is an important subject in all kinds of engineering (from domes of the buildings to bottles for beverages). Pogorelov is perhaps the most famous of many differential geometers who worked on the subject.

EDIT. The book of M. Berger, Geometry, has a lot of applications, with beautiful pictures.

Differential geometry is important in "computerized vision" a central area of CS/applied mathematics. Steve Zucker's homepage give some information and further links. In particular, look at: Differential Geometry from the Frenet Point of View: Boundary Detection, Stereo, Texture and Color.

An industrial application from the 19th Century:

Chebyshev, in order to supplement his income as a university professor, signed a contract with a textile businessman, for a second job where the goal was to find methods of cutting military uniforms (for which there was a huge demand at that time) that would minimize fabric loss. It is not clear to what extent Chebyshev helped the profession of clothing design, because he immediately got more interested in the mathematical aspect of the theory. This led Chebyshev to write a paper which bears the title of the paper under review, and a book which seems to be very difficult to locate. Chebyshev’s paper, written in French, is reproduced in the appendix of the paper under review. In particular, Chebyshev developed the theory of what are now called "Chebyshev nets".

Étienne Ghys presented his paper in 2012 with the title "When Mathematicians use Geometry to Cut Cloth". The session was recorded and is available at: https://youtu.be/1EoUBwwl8-k

I recently learned about this resource: Algorithmic Advances in Riemannian Geometry and Applications

It is a compilation of results in machine learning, statistics, optimization, computer vision, etc. with the unifying theme of exploiting the geometry of data using Riemannian-geometric machinery.

Check out the Symposium on Geometry Processing. This is already an established conference, accepting papers which foundations are build upon discrete and discretized differential geometry:

A very good source for this is this book: Helmut Pottmann, Johannes Wallner: Computational Line Geometry. It provides the foundation for many different applications of geometry in technology.

4
Mathematical means of studying large and complex but finite systems?
3
What are elementary applications of the Frobenius'Theorem in the Classical Differential Geometry?
16
Switching from pure mathematics (e.g. geometry) to more applied areas (e.g imaging) after Ph.D., as postdoc and chance of getting such a postdoc?
10
How difficult will it be for me to switch fields (details below) after my Ph.D. in pure mathematics?
51
Why differential forms are important?
11
What are some applications of Sperner style theorems?
40
Is algebraic geometry constructive?
Question feed