I believe it is the case that any finite subgroup of SO$(3)$ (the $3 \times 3$ orthogonal matrices of determinant $1$) is either a cyclic group $C_n$, or a dihedral group $D_n$, or one of the groups for one of the five Platonic solids.

Q, What is the generalization of this characterization to SO$(n)$, $n>3$, and in particular (my specific interest), to SO$(4)$?

This is certainly well-known, so this is just a reference request. Thanks! 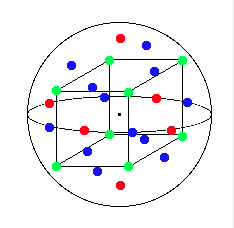 As mentioned in the comments, for general $n$ this is pretty hopeless. For $n = 4$ we can take advantage of the fact that $SO(4)$ is double covered by $Spin(4) \cong SU(2) \times SU(2)$, which more or less reduces the problem to classifying finite subgroups of $SU(2) \times SU(2)$. This in turn more or less reduces to classifying pairs of finite subgroups of $SU(2)$ (via Goursat's lemma), and since $SU(2)$ double covers $SO(3)$ you more or less already know what the answer looks like. I believe this is spelled out explicitly in Conway and Smith's On Quaternions and Octonions.

For general $n$, the classification of irreducible finite subgroups of ${\rm GL}(n,\mathbb{C})$ can be refined in various ways. First, consider only primitive linear groups (where the representation is not equivalent to one induced from a proper subgroup). Next, consider representations which (even after taking central extensions) can't be decomposed as the tensor product of two representations of smaller dimension.

Next, consider representations which can't be tensor induced from a representation of a proper subgroup (even after taking central extensions).

Recently, M.J. Collins has extended Weisfeiler's work to determine the maximal possible index of an Abelian normal subgroup of a finite subgrouup of ${\rm GL}(n,\mathbb{C})$. For $n > 72$ or so, the bound is $(n+1)!$, which is attained by $S_{n+1}$in its irreducible $n$-dimensional representation.

(Later remark: In general, for finite subgroups of ${\rm GL}(n,\mathbb{C})$, we can take scalar multiples of the elements to ensure that all elements have determinant $1$ without affecting the structure of $G/Z(G)$. This trick may not be available for real representations.)

A natural method (at least for me) of classifying finite subgroups of $SO(3)$ is to classify the orientable two dimensional orbifolds covered by $S^2$. This is done in several places, in terms of this discussion I would point to Thurston's notes Chapter 13.

A similar method can be employed to classify subgroups of $SO(4)$, namely the classification of elliptic 3-dimensional manifolds and orbifolds, which was accomplished over several works. The first is a classification of elliptic 3-manifolds which can be found in several places including chapter 4 of Thurston's book. This covers subgroups of $SO(4)$ that act freely on $S^3$. The remaining cases are those groups that act non-freely which were classified by William Dunbar over two papers Geometric Orbifolds and Nonfibering Spherical Orbifolds.

This classification is geometric and slightly more refined that the question asks for. For example there are elliptic 3-manifolds and elliptic 3-orbifolds with isomorphic groups. For example, lens spaces have finite cyclic fundamental group as do the so-call orbi-lens spaces. A good treatment of this can be found in the background of Boileau, Boyer, Cebanu, and Walsh's Knot commensurability and the Berge conjecture. This is pointed out to stress the fact that the list of fundamental groups above contains duplicates.

See the rather lucid account given by Bruno Zimmermann in his notes here.

Not the answer you're looking for? Browse other questions tagged reference-request gr.group-theory mg.metric-geometry finite-groups or ask your own question.

22
Classification of finite groups of isometries