Let any general mechanism of Fourier reconstruction using a finite number (first $N$) of Fourier coefficients (like what is done by partial sum and Cesaro partial sum) be denoted as $G_N[f]$, we know it is useful if $G_N[f] \to f$ pointwise as $N\to \infty$, Fourier partial sum and Cesaro sum being two examples which obey this. My question is how important it is for a general mechanism $G_N[f]$ to not only converge pointwise to $f$ as $N\to \infty$, but also $$\lim_{N \to \infty} V_a^bG_{N}[f] = V_a^bf$$ even when $f$ jumps atleast once in $(a,b)$.

Mathematically how important it is to search for such a Fourier reconstruction mechanism? Is it anywhere given in literature, the importance of such a thing?

The partial Fourier sum of order $N$ is post-processed by converting it in a series of Gegenbauer polynomials $C_n^\lambda(x)$ ($n=1,2,\ldots N$, with $\lambda=N/4$). The requirement for an exponentially accurate solution is that the location of the jump discontinuity is known in advance, and that the function is analytic elsewhere. The overall conclusion is that global expansions which are contaminated by local discontinuities still retain within them high order information, and the Gibbs phenomenon can be removed by post-processing.

The Gibbs phenomenon deals with the issue of recovering point values of a function from a finite set of Fourier expansion coefficients. We show that the knowledge of the expansion coefficients is sufficient for obtaining the point values of a piecewise smooth function, with the same order of accuracy as in the smooth case. This is done by using the finite Fourier expansion series to construct a different, rapidly convergent, approximation in terms of Gegenbauer polynomials. Thus the retrieval of the information should be done in a different basis than the storage of the information. The Fourier coefficients of a function contain enough information such that a different expansion, which is highly accurate, can be reconstructed. 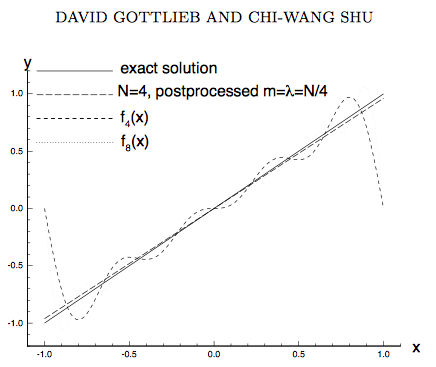 EDIT in response to comments by the OP

What if the location of the jumps is not known? Is there a way to locate the edges of the interval of analyticity using only knowledge of a partial set of Fourier coefficients? This problem has been addressed by Gelb and Tadmore in Detection of Edges in Spectral Data, part I, part II, part III. The method of edge detection followed by Gegenbauer reconstruction has been tested in this paper, for both one-dimensional and two-dimensional Fourier coefficients.

Not the answer you're looking for? Browse other questions tagged real-analysis fourier-analysis harmonic-analysis or ask your own question.