Do the bounded isophase lines of a complex polynomial $f$ through the zeroes of $f’$ define a spanning tree?

a1) Is it correct that through every (generic) saddle point of $\arg(f)$ (= zero of $f’$) there are two isochromatic lines, one of which is unbounded and one of which connects two zeroes of $f$?

a2) If a1) is correct: Is there a simple (geometric) criterion determining which zeroes are directly connected via an isochromatic line?

b1) Is it correct that the set of isochromatic lines which connect two zeroes define a spanning tree (of all zeroes)?

b2) If b1) is correct: Can the (graph theoretical, i.e. topolocial) structure of the spanning tree be solely defined by the position of the zeroes of $f$ (e.g. minimal weigth spanning tree where weight is square of Euclidean distance of zeroes)? 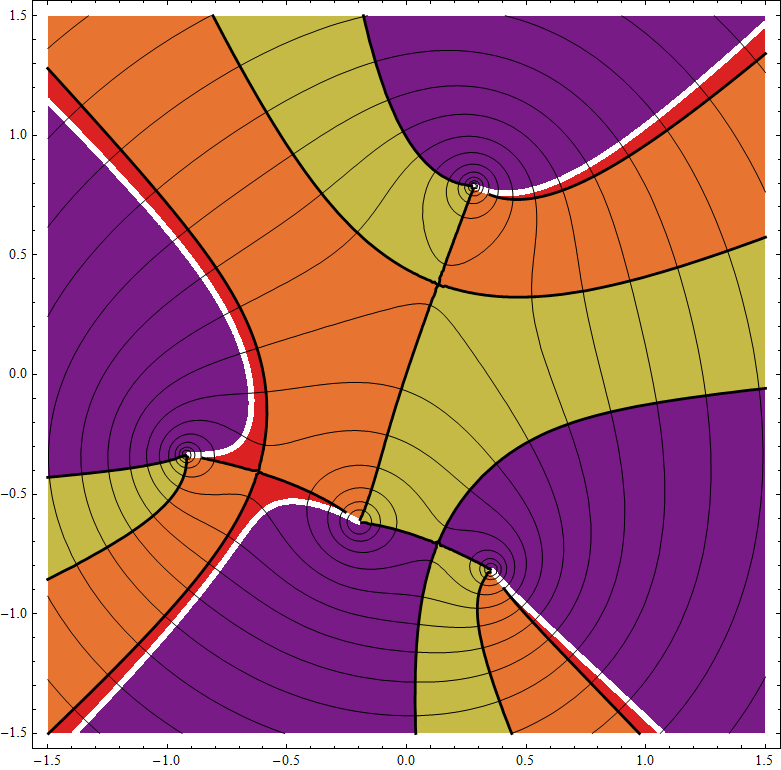 The figure shows the color-encoded phase plot of an example of a polynomial of degree four (the thin black lines are lines of equal absolute value, they are orthogonal to the isochromatic lines). The four zeroes of $f$ can be seen as the minima of the absolute value. The isochromatic lines through the zeroes of $f’$ are the thick black lines. The three chromatic saddle points (=zeroes of $f’$) are clearly visible. In this example the spanning tree has one central vertex (the zero of $f$ below the middle) from which there are edges to the other three zeroes of $f$.

An electrostatic interpretation could possibly be helpful. If we consider the zeroes of $f$ to be equal charges in 2d, the question amounts to how can one know which charges are connected via a field line of the electrostatic field.

Every complex polynomial with $n$ distinct zeroes has $n-1$ critial points (zeroes of $f’$). For the location of the zeroes there is huge literature (for a starting point see e.g. Q.I. Rahman und G. Schmeisser, Analytic Theory of Polynomials, Oxford University Press, 2002).

From numerical studies it seems to be interesting to ask which spanning tree of the zeroes could be helpful in describing the location of the critical points (note that the spanning tree through $n$ vertices has $n-1$ edges).

In this context I have proven a slight strengthening of the theorem of Gauss-Lucas for polynomials of degree four (http://arxiv.org/abs/1405.0689).

As @Alexandre Eremenko noted, in the generic case the answer is yes, and in fact it can be shown that any connected finite tree can appear as the isochromatic tree graph of some polynomial (see Theorem 6.1 here, this essentially has the parallel result for level curves, an induction argument will give you the desired application to isochromatic trees).

In the non-generic case the picture is even more interesting, and the isochromatic tree graphs must allow critical points as vertices as well, as I describe below.

The sets you are considering I will call "gradient lines" of $f$, namely components of the sets $\{z:\operatorname{Arg}(z)=\theta\}$ for various values of $\theta\in[0,2\pi)$. First I need a bit of info about the orthogonal objects, namely the level curves of $f$ (sets where $|f|$ is constant). (I call them "orthogonal" because at any point $z$ not a critical point of $f$, the level curve and gradient line of $f$ containing $z$ are orthogonal to each other at $z$.)

EDIT: I just realized that I don't think I need the second bullet point in the theorem below for this answer, but it is none the less true and I think interesting.

If we now let $\mathcal{T}$ denote the union of the $A_z$ over all critical points $z$ of $p$, then $\mathcal{T}$ has the following nice properties.

In my own work I have classified the way in which the critical level curves of the polynomial $p$ (level curves containing critical points) may be arranged. This geometric property of of polynomials is a strong conformal invariant. That is, for any two polynomials $p_1$ and $p_2$, they have (geometrically) the same configuration of critical level curves if and only if there is a degree $1$ polynomial $\phi:\mathbb{C}\to\mathbb{C}$ such that $p_2=p_1\circ\phi$ on $\mathbb{C}$. A similar analysis might be done using the trees described above. See papers 2, 3, and 4 here for this work.

As I understand from the reference you give, "isochromatic lines" are simply the lines where the argument is constant. In other words they are preimages of the rays from the origin.

Assume that we are in general position, that is critical points are simple and no critical values have the same argument.

Now, consider those isochromatic lines that connect zeros. Their union is evidently connected. It also cannot separate the plane, because if there is a bounded component of the complement, then what will its image be? Thus this is a tree which has zeros as vertices.

It is not difficult to classify topologically all pictures which will arise from polynomials.

EDIT 2. The moral is that the really useful geometric picture of an analytic function is the Riemann surface of the inverse function spread over the plane/sphere.

You are asking about the foliation (with some singular points) provided by the preimages of radial lines. Clearly you can say the following:

a1. Generically, every critical point is simple, and all critical values have different arguments. Hence clearly there are four lines meeting at each critical point, and analytic continuation of two of these will lead to a zero, while the other two will lead to infinity. Hence the answer is positive.

a2. I am not quite sure what you are looking for here. There are a number of ways to describe the mapping behaviour of the polynomial (classical "line complexes", "dessins d'enfants" in the case where there are only two critical values, various constructions connected with studies of Hurwitz numbers), and most of these should allow you to read off the desired information. But your construction is very similar to this already.

EDIT. Rereading your question, I now see that by "geometric", you mean, "in terms of the position of the zeros". I think that, in the way you mean the question, the answer is negative. For example, by work of Bishop ("True trees are dense"), your set can approximate any given compact set arbitrarily closely - even for polynomials with just two critical values, say $0$ and $1$, where your tree is the "dessin d'enfant" (and the polynomial is called a "Shabat polynomial"). In particular, you can make a polynomial of this type for which the tree contains some vertices that are very close together, but not connected by any short path - and some vertices relatively far together that are connected by an edge. [Basically, you start Bishop's construction with an arc of a circle that just leaves out some very small interval.] This seems to exclude any of the kind of answers that you are looking for.

Of course, this is non-generic, but that does not seem essential (and probably you can just make a small perturbation).

Not the answer you're looking for? Browse other questions tagged cv.complex-variables polynomials or ask your own question.

4
Is there a critical point of a polynomial $f$ within every disc having as diameter the line segment between two zeros of $f$?

33
Must the set of lines through the origin on which a nonconstant entire function is bounded be finite?
2
Complex Zeroes of Stirling functions of the second kind
4
Is there a critical point of a polynomial $f$ within every disc having as diameter the line segment between two zeros of $f$?
16
“Local” Gauss-Lucas theorem?
Question feed