How to explain the concentration-of-measure phenomenon intuitively?

One way to phrase the "concentration-of-measure" phenomenon is that, for a Euclidean sphere $S^d$ in $d$ dimensions, for large $d$, "most of the mass is close to the equator, for any equator."1

Q. How could one explain/justify this intuitively—perhaps just verbally—to a mathematically literate but naive audience (say, advanced undergraduate math majors)?

That "most of the mass is close to the equator, for any equator" seems almost contradictory (imagining orthogonal equatorial hyperplanes), or at the least, superficially quite puzzling. Can one only gain intuition via working through details of the Brunn–Minkowski theorem or the isoperimetric inequality?

1Boáz Klartag, in a book review in the AMS Bulletin, July 2015, p.540. According to the Wikipedia article, the idea goes back to Paul Lévy.
mg.metric-geometry convex-geometry intuition geometric-intuition
Share
Improve this question
edited Jun 27, 2015 at 19:33
Joseph O'Rourke
asked Jun 27, 2015 at 19:27

As I see it, the key intuition is passing from the equator orthogonal to a single vector to looking at a whole orthonormal basis.

Suppose we pick a random unit vector $(x_1,\dots,x_n)$. What we want to know is why $x_1$ is probably near zero, since this is equivalent to being near the equator relative to the first basis vector. But this feels intuitively obvious to me: all the coordinates have the same distribution, and they surely can't all be large, so they had better all be small.

(This is not so different from Bjørn and Dustin's answers, but expressed in a less sophisticated way.)

Visualize first, for comparison, the 2-dimensional unit sphere in 3-dimensional Euclidean space (something that I can visualize!), and imagine it cut, by circles of latitude (perpendicular to the $z$-axis), into narrow zones. Of course, the zones closer to the poles have smaller radii, and therefore smaller circumferences, than the zones near the equator. It's well-known that this decrease of circumference, as you approach the poles, exactly compensates for the increasing "tilt" of the zones, so that a zone's area is proportional to its height as measured in the $z$-direction.

Take iid Gaussian random variables $X_1,\ldots,X_d$ with mean $0$ and variance $1/d$. Normalizing the vector $X=(X_1,\ldots,X_d)$ will produce a random point on the unit sphere, but it's already close to having unit norm, so we will avoid this for the sake of intuition. For each unit vector $v$, there is an equator given by

Observe that $\langle X,v\rangle$ is Gaussian with mean $0$ and variance $1/d$. Thus, $X$ is typically close to $v$'s equator when $d$ is large. This is because it only has a unit of energy to spread across $d$ dimensions, so the amount of energy in each dimension must vanish.

I'm not sure how conceptual this is, but I think the explanation is the same as the (intuitively obvious?) fact that most of the area underneath the graph of the function $t^n$ over the unit interval is near $t=1$. In the end it may just be this computational fact, but it is easy enough to see.

This answer is complementary to the other answers. I'll attempt to tackle the paradox

That "most of the mass is close to the equator, for any equator" seems almost contradictory (imagining orthogonal equatorial hyperplanes)...

head-on by leveraging some intuition about the 3-sphere.

The issue is that for the two spheres that are easy to visualize, the 1-sphere and the 2-sphere, the overlap of narrow equatorial bands in orthogonal directions is indeed insubstantial. For the 1-sphere it is, in fact, empty: one equatorial band consists of arcs on the west and east sides of the circe; the other consists of arcs on the south and north sides.

Of course if we increased $\epsilon$ so that each band covered 99% of the area (circumference in this case), then there would be an overlap, of four disconnected arcs, but as a schematic for the situation in higher dimensions this fails since the arcs disappear as $\epsilon$ shrinks.

The situation is hardly better for the 2-sphere. The overlap is non-empty this time, but it consists of two antipodal $\epsilon\times\epsilon$ patches (black regions) where the orthogonal belts overlap, and it is hard to imagine, even schematically, how the area of the patches can remain large as $\epsilon$ shrinks. 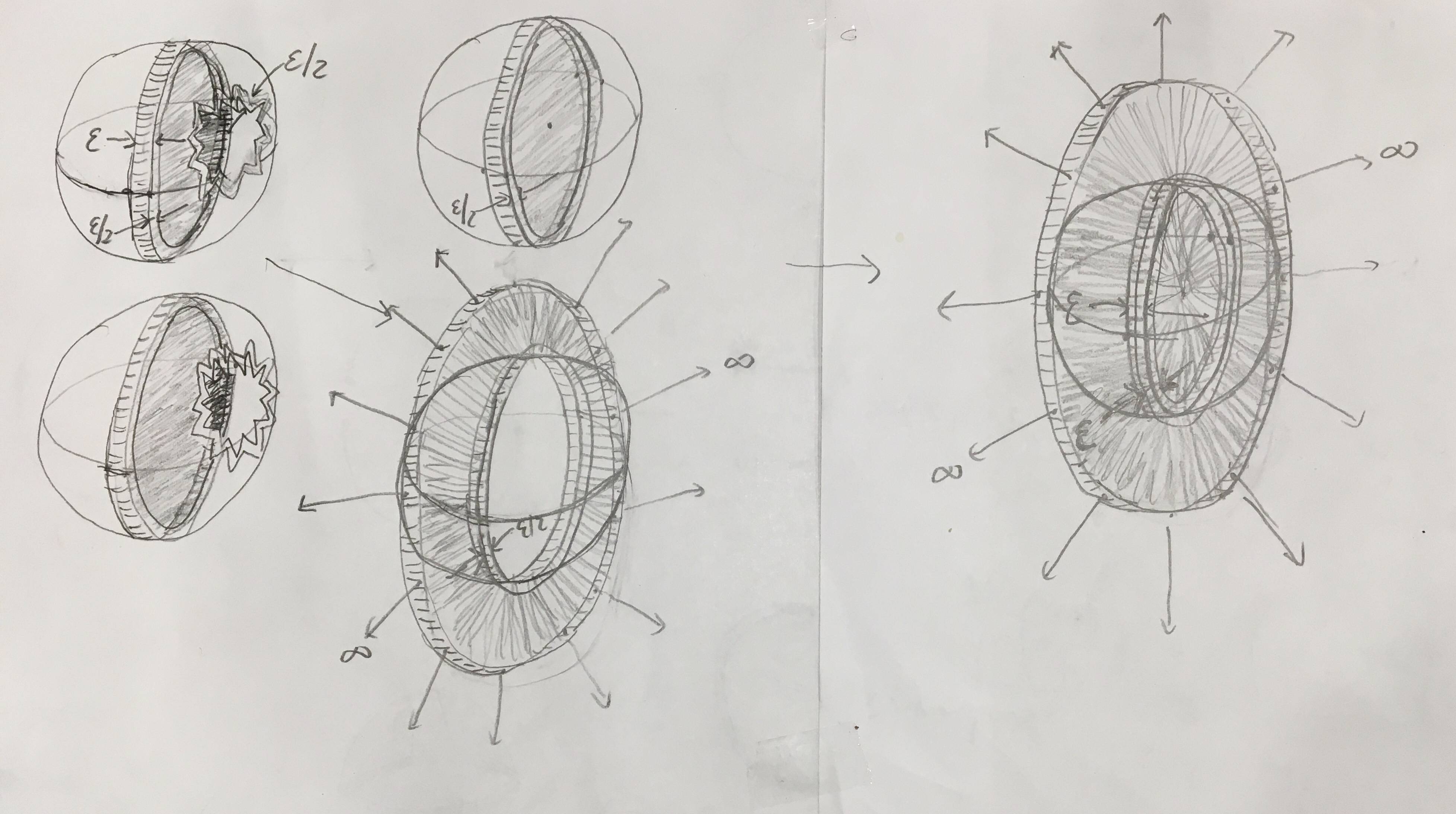 As a schematic for the $n$-sphere, with $n$ large, this picture seems to me successful. As $\epsilon$ shrinks, the overlap remains global in scope, containing a circumference. Furthermore, the picture starts to satisfy some consistency checks: It is easy to believe that most of the volume of an $n$-dimensional ball lies in its outer layer. It's somewhat less obvious but still plausible that most of the volume of an $n$-dimensional ball lies in a thickened disk containing the equator. (Andreas Blass's answer may help convince you of this). For both to be true, most of the volume must lie in a thickened surface band around the equator. That this is so is again plausible: if $n$ is large, then $n-1$ is also large, so most of the volume of the disk lies near its outer edge rather than near its center, that is, in the part where it overlaps the spherical shell; at the same time, it isn't far fetched that in the spherical shell (when $n$ is large) one doesn't lose much by keeping the equatorial region and discarding the caps containing the poles. (This is explained in Andreas Blass's answer.) But this equatorial band containing most of the mass is precisely the overlap of the orthogonal equatorial regions in our 3-sphere construction.

Not the answer you're looking for? Browse other questions tagged mg.metric-geometry convex-geometry intuition geometric-intuition or ask your own question.

0
Intuitive explanation of concentration of the measure for spheres
20
Why are two "random" vectors in $\mathbb R^n$ approximately orthogonal for large $n$?