Reference for a PL flat torus embedding in $\mathbb{R}^3$

A piecewise linear flat torus embedded in $\mathbb{R}^3$ is shown at http://www.mathcurve.com/polyedres/toreplat/toreplat.shtml. It is flat in the sense that the angle defect at the vertices is zero. 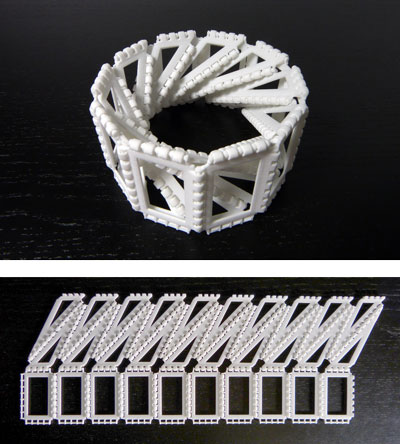 Who came up with this construction?

I asked Robert Ferréol who maintains the mathcurve.com site. He heard of it from Guy Valette, who remembers seeing a torus like this at Oberwolfach over 30 years ago.

I believe the originator is Victor A. Zalgaller.

Permit me to quote myself from an earlier answer:

In the paper by V. A. Zalgaller, "Some bendings of a long cylinder," Journal of Mathematical Sciences, 100(3):2228--2238, 2000 (translated from a 1997 article in the Russian journal Zapiski Nauchnykh Seminarov POMI), he proves this theorem:

"Theorem 1. A direct flat torus can be isometrically embedded in $\mathbb{R}^3$ 'in the origami style' if its development is a rectangle sufficiently large compared to its altitude."

He defines a direct flat torus as the result of identifying the opposite sides of a rectangle.