Regions on a sphere that avoid a fixed point set

For example, let $P$ be the $n{=}5$ points shown below; I've drawn in the convex hull (blue) and an enclosing circle (red) for perspective. A hemisphere does not avoid $P$, because $P$ easily fits in a hemisphere. 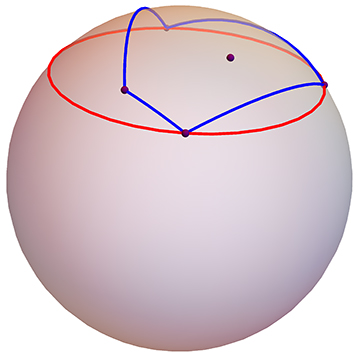 Q. What is the largest-area region $R$ that avoids a given set $P$?

Here area is the measure of $R$.

The convex hull of $P$ avoids $P$ (above, the hull is the illustrated quadrilateral formed of (blue) geodesic arcs), because the vertices of the hull are not strictly interior to the hull. A larger region that avoids $P$ is the smallest enclosing disk, whose boundary is outlined in red above. But I believe this is not the largest $R$ that avoids this particular $P$, for a slightly larger disk with an annular hole to "capture" the interior $5$th point has larger area.

The problem feels different if (a) $P$ fits in a hemisphere, and (b) all points of $P$ lie on its convex hull.

It is likely this question has been considered before, in which case I'd appreciate a reference. The same question may be asked for spheres in $\mathbb{R}^d$ for arbitrary $d$.

Update (23Oct15). I posed this question at the Canadian Conference on Computational Geometry, and a participant, Alexandru Damian, proved that, for an $n$-point set $P$, the area of an avoiding set cannot be larger than $\frac{n-1}{n} A$, where $A$ is the area of the sphere. The argument is sketched here (PDF download). The bound is tight for $n=2$ antipodal points.
mg.metric-geometry convex-geometry spherical-geometry
share | cite | improve this question | |
edited Oct 23 '15 at 12:16
Joseph O'Rourke
asked Jun 2 '15 at 11:43

This is the germ of an answer to suggest that a connected but not simply connected region R can be built that may have arbitrarily large area, and in any case an area larger than that occupied by the convex hull.

When one has these measurements, one now tries to add more and more wedges to R while avoiding any rotation that covers the point set P. Even if one uses only one wedge, it should be clear that for many "narrow" point sets P, a region R which avoids P can have an area more than twice that of the area of a small convex hull containing P.

Not the answer you're looking for? Browse other questions tagged mg.metric-geometry convex-geometry spherical-geometry or ask your own question.

10
Ordered geometries from convex subsets of the plane
15
Convex hull on a Riemannian manifold
10
Chord arrangement that avoids confining small or large disks
15
Isoperimetric-like inequality for non-connected sets
6
Any reference to an algorithm for finding the largest empty circle on a sphere (with great-circle distance)?
5
Pigeonholing Polygons: Can two rigid regions fit in twice the space needed?
2
Worst Case Region for a Convex Hull Heuristic
Question feed