Is every closed curve in 3D a geodesic on a genus-0 surface?

Q. Does there always exist a smooth, embedded, genus-zero surface $S \subset \mathbb{R}^3$ such that $\gamma$ is a (closed) geodesic on $S$?

Here the metric on $S$ is inherited from $\mathbb{R}^3$. The curve $\gamma$ could be knotted, but it is non-self-intersecting. I am seeking $S$ homeomorphic to a sphere, i.e., genus-zero. 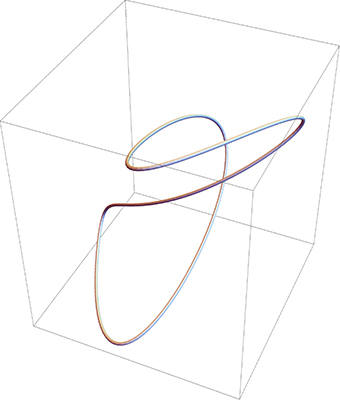 One can construct an appropriate surface patch locally in a neighborhood of each point $x \in \gamma$, but it is unclear to me how to argue that these patches can be completed to a genus-$0$ embedded surface $S$.

Revision. Andy Putman and Igor Rivin both answered the original question: No if $\gamma$ is knotted. So I have revised the question to restrict $\gamma$ to be unknotted.

Edit: See the end for a summary of this answer

I disagree with the statement "One can construct an appropriate surface patch locally in a neighborhood of each point". In fact, there are local obstructions to the existence of the desired surface. Let $\gamma:(-\epsilon,\epsilon) \rightarrow \mathbb{R}^3$ be an embedded arc parameterized proportional to arc length and let $S \subset \mathbb{R}^3$ be a smooth surface containing $\gamma$. Then $\gamma$ is a geodesic on $S$ if and only if $\gamma''(t)$ is orthogonal to the tangent plane of $S$ for all $t$. The tangent planes of $S$ thus give a smoothly varying family of planes in the restriction to $\gamma$ of the tangent bundle of $\mathbb{R}^3$ which are orthogonal to $\gamma''$. Such a family of planes need not exist. The problem arises at points where $\gamma''(t)=0$; it is clear what the tangent plane to $S$ must be elsewhere.

For example, let $\gamma_1:(-\epsilon,\epsilon)\rightarrow \mathbb{R}^3$ be a smooth embedded curve with the following properties.

Of course, $\gamma$ is not a closed curve, but it is easy to close it up to a simple closed unknotted curve.

I want to close with one further remark about the above. Assuming it exists, the family of planes that was the input to the above construction is unique exactly when the set of points on $\gamma$ where $\gamma'' \neq 0$ is dense. But if there exists an interval on which $\gamma''=0$, then we can use that interval to introduce as many half twists as we need to the planes to get rid of the Mobius band and linking number obstructions.

SUMMARY OF ANSWER Let me summarize the answer, which gives a set of necessary and sufficient conditions for the existence of the sphere (whose logic is, alas, a little complicated). First, there is a "local" obstruction that must be satisfied for the desired sphere to exist. It can be defined as follows. Let $U \subset \gamma$ be the set of all points where $\gamma''$ is nonzero. Define $\phi:U \rightarrow \mathbb{P}(\mathbb{R}^3)$ to take $u \in U$ to the line in the direction of $\gamma''(t)$. Then for a sphere to exist, the function $\phi$ must be able to be extended to a function $\widehat{\phi}:\gamma \rightarrow \mathbb{P}(\mathbb{R}^3)$ such that $\widehat{\phi}(x)$ is orthogonal to $\gamma'(x)$ for all $x$. This is a vacuous condition if $\gamma''$ never vanishes.

Now assume that such a $\widehat{\phi}$ exists. If $U$ is not dense in $\gamma$, then no further conditions are needed: the sphere exists.

No, for any knotted curve. Such a curve would bound an embedded disk on either side, and, therefore, would be unknotted.

Not the answer you're looking for? Browse other questions tagged dg.differential-geometry mg.metric-geometry curves-and-surfaces geodesics or ask your own question.

4
Measures of the complexity of a metric
5
Solution of Plateau Problem for a simple, smooth closed curve on a Riemannian Manifold (Kahler) gives a surface that can be parametrized by a closed disk?
13
Optimal inspection path on a sphere
3
Surface curves equidistant from a simple closed geodesic
6
Are shortest halving curves simple closed geodesics?
17
Simple, closed geodesics in $\mathbb{S}^3$ manifold
14
Using Stokes' theorem to define “area” enclosed by a curve
2
Closed geodesics that cross one another frequently
Question feed