But I'm puzzled thinking what else Cole could have done. I skimmed Chapter XIV in Dickson. The methods which seem to have existed at the time are:

So, my question is:

The paper by Cole "On the factoring of large numbers." BAMS (1903) discusses this.

Summarizing what Cole says for my own understanding: By methods which he doesn't make clear to me, Cole found solutions to $x^2 \equiv a \bmod N$ for many small values of $a$ and convinced himself (but not rigorously) that many other $a$ were not achievable. This gave many congruence conditions on possible divisors of $N$. In this manner, he was rapidly able to filter the integers up to $16$ million down to just a few trial divisors, none of which worked. (Note that it is okay if he winds up trying some non-prime divisors in the process.)

You assume that he did his computations by hand, but that's not a necessity. At the time, mechanical calculators (arithmometers) were widely available. It's not at all unusual that the kind of person who devotes Sundays to factoring would own one.

These machines are orders of magnitude faster and more precise than doing computations by hand. This model from 1875 could handle 20-digit numbers, for instance. ($2^{67}$ has 21 digits.) 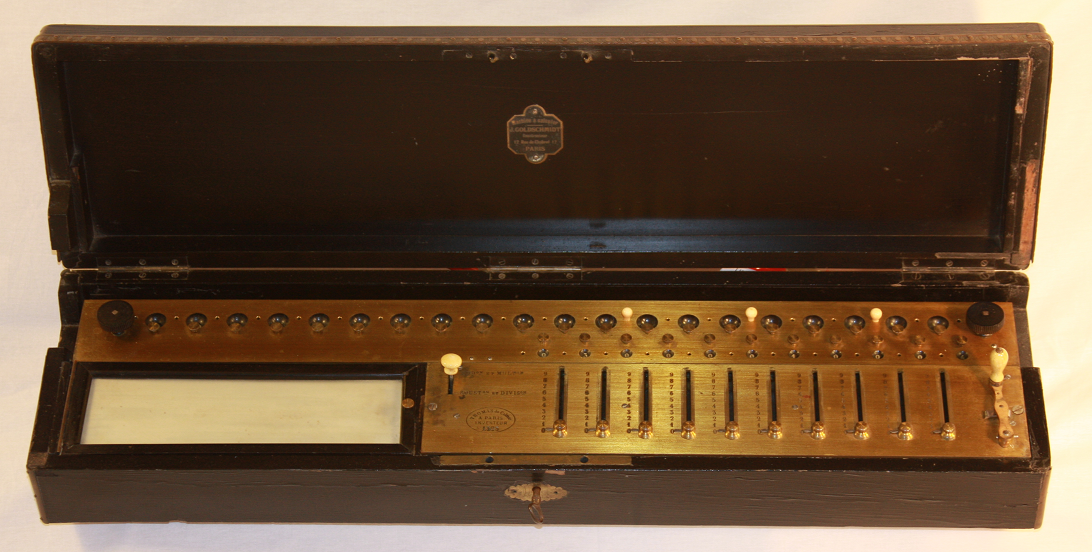 Multiplying two numbers on one of them takes a few seconds. To multiply 761838257287 by 193707721, for instance (assuming they fit on the machine, which isn't the case for the machine in the picture --- it can multiply two ten-digit numbers at most, natively), you'd have to:

I don't have much manual skill with these machines, but it looks like the method could be performed in a completely mindless way --- turn the crank until you hear the bell, turn it back one turn, slide left, repeat.

While the question how Cole factored $N := 2^{67}−1$ has already been answered by quid, David Speyer's more general question is how someone could find the factors of that number in $100000$ minutes of hand computation.

Another option would be to try the quadratic sieve. In this case, we try to see whether what FactInt's MPQS routine does could be done by hand as well. --

FactInt chooses a factor base of size $92$, and takes $4096$ as length of the sieving interval. With this, it takes $8$ polynomials until it finds enough factorizations over the factor base (including relations with a large factor) to obtain a factorization of $N$. Doing the sieving by hand on standard A4 $5$mm-squared paper by marking squares would require $2$ sheets of paper for each sieving interval of $4096$ numbers, as there are $41 \cdot 58 = 2378$ squares on each sheet, hence the sieving would take in total $8 \cdot 2 = 16$ sheets of paper.

Finally one would need to find the nullspace of a sparse $\mathbb{F}_2$ matrix with $114$ columns and a few more rows, which one could write down on $6$ of the said sheets of squared paper glued together if one uses one square for each entry. Doing Gaussian elimination would now probably be a little tedious by hand and would likely take up the rest of the writing pad, but it would certainly not be infeasible with a supply of time as generous as the assumed $100000$ minutes.

I imagine it took Cole longer than he said. If I were to undertake the project, here is how I would proceed:

I would start sifting the set of numbers {134k + 1} for primes. One can modify the Sieve of Eratosthenes to produce quite a few of the primes quickly, and then just do certain members of the arithmetic progression whether they are prime or not (say those coprime to 2310).

I might do trial division, but for the larger numbers, modular exponentiation/ multiplication is the way to go. I make a table up to 2^33 of powers of two. Given p, I multiply by the largest power of 2 less than p to get a product less than p and then double that carefully and subtract p, and then repeat until I get to 2^67 mod p. The nice thing about this is that I can leverage earlier work: If I have 2^s = p + K for some small K, the next prime q = p +r will have 2^s = p + (K-r) + r, and so some work can be saved on some iterations. I can see processing two or three primes in parallel this way by hand.

Not the answer you're looking for? Browse other questions tagged nt.number-theory ho.history-overview prime-numbers factorization or ask your own question.

112
Papers that debunk common myths in the history of mathematics
121
What are some noteworthy "mic-drop" moments in math?
15
Is the surreal number $\omega(\sqrt{2}+1)+1$ a prime?

19
On Euclid's proof of the infinitude of primes and generating primes
2
What are the chances of finding a small factor?
20
Primes of the form $x^2+ny^2+mz^2$ and congruences.
6
Fermat-quotient of "order" 3: I found $68^{112} \equiv 1 \pmod {113^3}$ - are there bigger examples known?
2
Efficiently lifting $a^2+b^2 \equiv c^2 \pmod{n}$ to coprime integers
2
Which composites pass this probabilistic primality test?
3
Why is this sequence a good prime-generator?
Question feed