Explicitly describing the region of the plane "outward of" a simple, open, oriented, cubic curve $c:(0,1)\to\mathbb{R}^2$

Some Context:
I'm working with some data given in the form of Bezier curves. I need to sort these (partially ordered) Bezier curves by "outwardness" (described below) and have come across an interesting problem. Such an interesting problem, that I'm confident others have worked on the same problem. Due to the limited complexity of the problem (only considering simple cubics) I'm guessing a solution is known too.

Terminology/Notation/Assumptions:
Let $c:(0,1)\to\mathbb{C}$ be a cubic polynomial with complex coefficients. Further, assume this curve is simple, oriented and let the outward (unit) normal vector to $c$ at the point $t$ be denoted by $n_c:(0,1)\to\mathbb{C}$.

For my purposes, we can also assume that $c$ has a weak form of convexity in that it is not "outward of" itself (according to the following definition).

Current Progress (and the interesting problem):
Currently I'm using generating $N$ outward normal lines and testing for intersections, but this a very slow. Trying to speed it up, I thought maybe I could explicitly solve for the curves that define the boundary of $\mathcal{N}^+_c$. This is the interesting part... what are these curves?
I've included some pictures below (the curve, $c$, is in black). You can see sometimes these boundary curves of $\mathcal{N}^+_c$ are (piecewise) linear, and other times they are curved (depending on the curvature of $c$).

Ideas:
1)I could do something really adhoc (like doing a floodfill of the outer white space in the example images and fitting a cubic spline to the boundary), but that seems messy.
2)I could look at the family of curves offset from (parallel to) $c$ at a distance of $s$ and find values of $s$ and $t$ at which self-intersections occur... which sounds like fun, but a little outside my wheelhouse so I thought I'd ask on here before investigating that path further.

Anyone know how to do this? The ideal solution would be a function that takes in the coefficients of $c$ and outputs (some explicit parameterization of) the two boundary curves that $\partial\mathcal{N}^+_c$ is the union of.

Note: In the examples below, $c$ is black (the red curve is parallel curve $sn_c(t)+c(t)$ at some fixed $s$ I chose for display purposes). 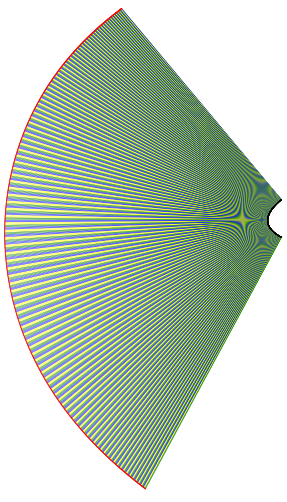 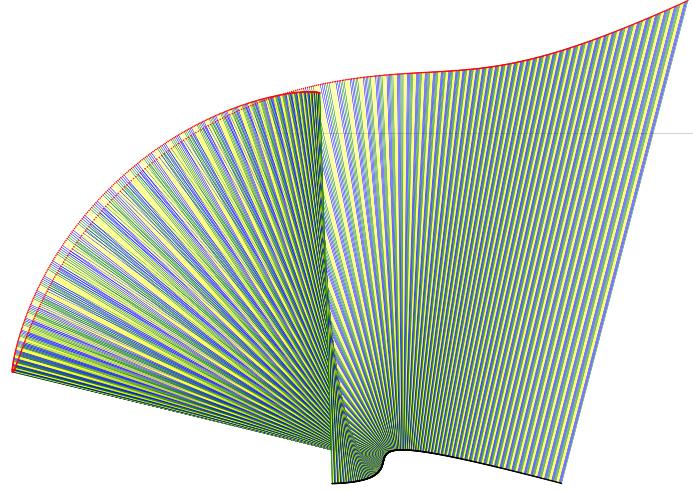 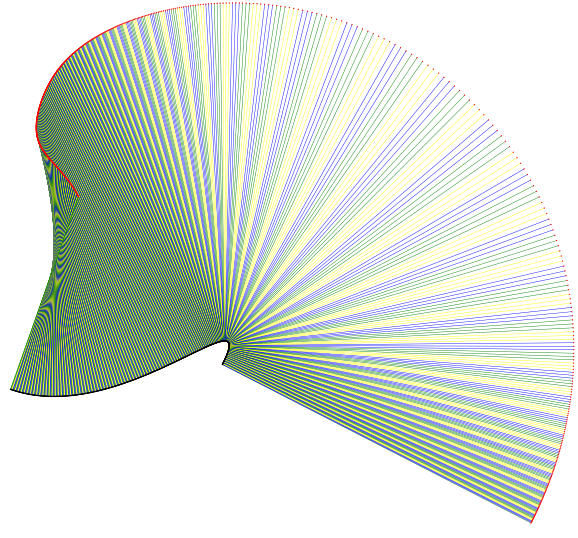 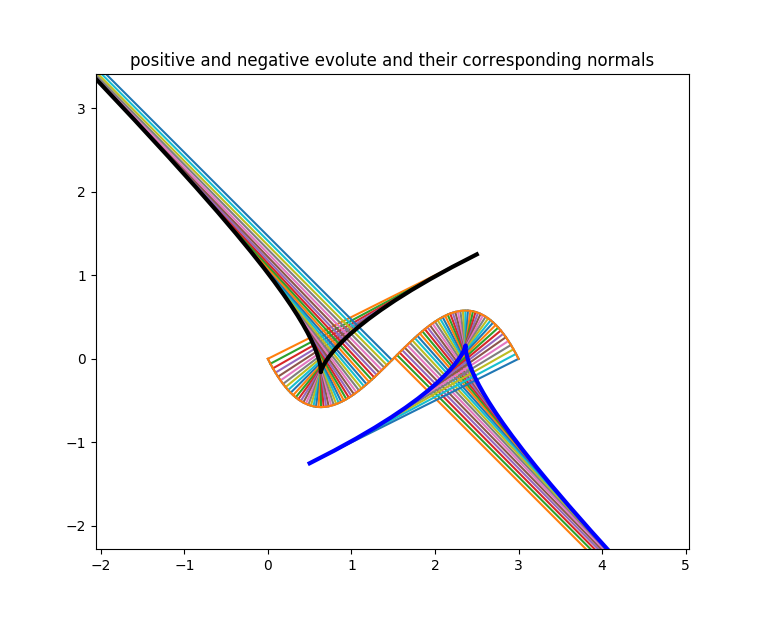 The evolute has a nice representation so in theory you can use it to solve your problem in the following way: Compute the evolute, then remove the negative-side portions (the blue branch in the figure), intersect it with the normal lines at the end points, construct the boundary curves and test whether the region bounded by them contains the second curve.

However, I believe there is a simpler way that uses the continuity of the normal lines. Let $C_1(u)$ be the first Bezier curve and $C_2(v)$ be the second curve. If we think of the normals of $C_1(u)$ sweeping the plane, we can see that there are only three cases to test (see figure below). 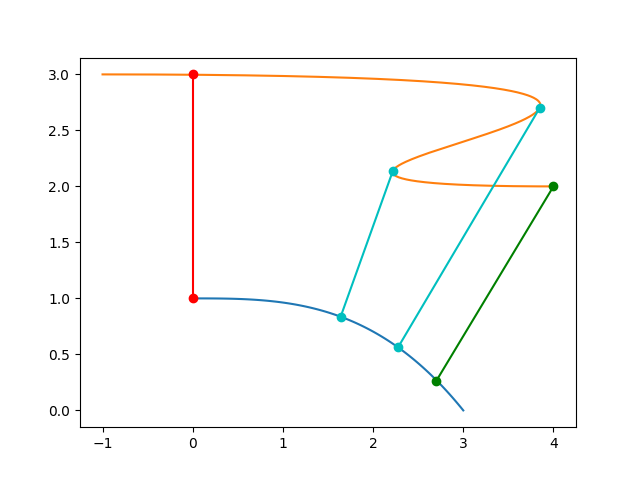 This bivariate polynomial system can be solved in several ways, for example using resultant methods or other methods that are implemented in computater algebra software. However, a nice method for bivariate Bezier systems (which extends the above method from Graphic Gems) can be found in this paper and its references, where they solve a very similar problem (see their equations 1,2).

The three cases described above also have a more algebraic meaning. Let $F(u,v) = <C_2(v)-C_1(u), C_1'(u)>$ be a bivariate function in $u$ and $v$, and let $F(u,v)=0$ be the implicit curve in the $(u,v)$ domain describing the zero set of the function. Every $uv$-pair on the curve describes an intersection of a normal line of $C_1$ with $C_2$. The figure below demonstrates this implicit curve for the two curves above. 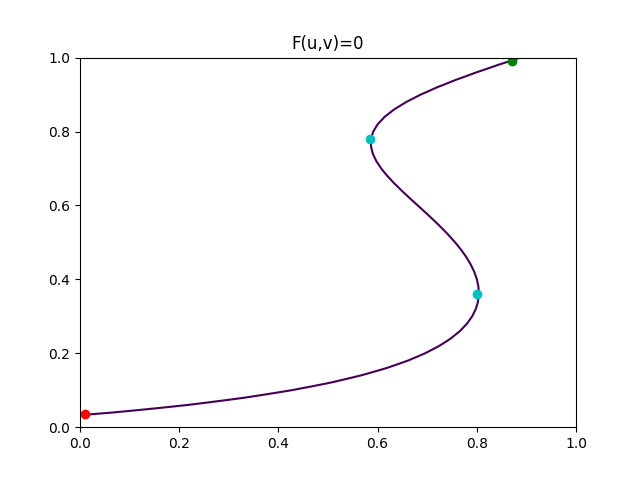 The red point corresponds to the first case described above, since it assigns $u=0$ (the first point of $C_1$).

The green point corresponds to the second case. It is the result of assigning $v=1$ (the last point of $C_2$).

So, in the end, an analysis of the shape of the implicit curve $F(u,v)=0$ solves your problem.

The article "Rational Cubic Implicitization" by M. Floater should come close to what you need; the article is available on CiteSeer.

Not the answer you're looking for? Browse other questions tagged ag.algebraic-geometry dg.differential-geometry euclidean-geometry fibre-bundles heat-equation or ask your own question.