Let $X$ be a CW complex and $A$ a subcomplex. I will assume that both are compact, and that $X$ is $n$-dimensional. Furthermore, assume that the local homology of $X$ is that of a manifold in a range. That is, there is a number $k \leq n$ with the property that for each $x \in X$,

If $X$ were actually a manifold we would have some form of Alexander duality relating the (co)homology of $A$ and its complement in $X$. For instance, if $X = S^n$, then

and more generally, there is a statement relating the homology of $A$ to the cohomology of $X$ relative to $X \setminus A$.

Does anything of the sort hold in the setting that I have described above, where $X$ is only a local homology manifold "in a range?" If an isomorphism like the above were to hold, I would for instance expect that the range in which it is true would depend upon the number $k$.

at.algebraic-topology gt.geometric-topology homotopy-theory
Share
Improve this question
asked May 21 '15 at 23:30

No, I do not think that hypothesis buys you anything. The complementary hypothesis, $H_i(X,X-{x})=\tilde H_i(S^n)$ for $i\geqslant i_0$ does yield duality in a range. The tool for systematically exploiting such hypotheses is Verdier duality.

Alexander duality is mainly Poincaré duality, plus a comparison of the cohomology of a subspace and the limit of the cohomology of its neighborhoods. If the space is a neighborhood retract, there is a cofinal sequence of equivalent neighborhoods. In general, this comparison requires Čech cohomology. Alexander duality in the sphere involves another step, using the long exact sequence of a pair and the fact that a sphere has little cohomology, but that is not relevant to your question. So I will focus on Poincaré duality. Its generalization exploiting local structure is Verdier duality. I will explain how your hypothesis and variations interact with Verdier duality.

Thus the stalks are the local homologies $D_{X,x}=H_*(X,X-\{x\})$. This is particularly easy to see in a locally conical space, where the limit has a constant final subsequence, but maybe a general CW complex is harder. Thus if $X$ is $n$-dimensional, the dualizing sheaf is supported homological degrees $0$ through $n$, which in cohomological terms are degrees $-n$ through $0$. If $X$ is a simplicial complex, then the support of the $H^{-i}(D)$ is contained in the $i$-skeleton because the neighborhood is a product with an $i$-simplex and thus the link is an $i-1$-suspension.

We exploit the stalks by a hypercohomology spectral sequence $E_2^{p,q}=H^q(Y;H^p(D))\Rightarrow H^{p+q}(Y;D)$. Since the dualizing sheaf is concentrated in non-positive degrees, this is a second quadrant spectral sequence. I believe that its support also satisfies $p+q\leqslant$, which I noted above for simplicial complexes and is clearly true for $E_\infty$. Your hypothesis, that $D$ is supported in degrees $-n$ through $-i_0$ does not seem to provide any control. But the complementary hypothesis that its truncation to that range is the constant sheaf $\mathbb Z$ means that the $E_2$ page is, in a range, only a single vertical line, so it collapses with the desired value. (You may also wish to consider the possibility that the dualizing sheaf is approximated by a non-trivial local system, as with unorientable manifold.) 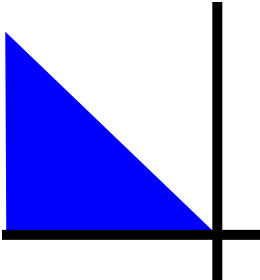 The second is the restriction of support due to your hypothesis: 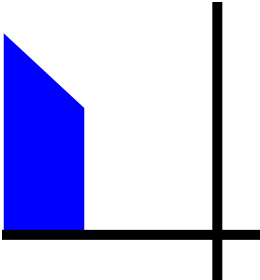 The third is the restriction of support due to the complementary hypothesis, shown in blue, with the collapse region show in light cyan: 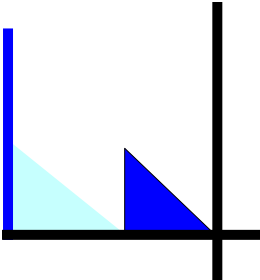 Not the answer you're looking for? Browse other questions tagged at.algebraic-topology gt.geometric-topology homotopy-theory or ask your own question.

20
How are the Conway polynomial and the Alexander polynomial different?
7
Seifert surfaces via Alexander duality
15
Lefschetz duality for non-compact relative manifolds
13
Pseudomanifolds and Poincaré duality
11
Poincare duality spaces vs. manifolds via lifting maps, the obstruction theory and the role of simply connectedness
4
The homological negligibility of certain subsets in compact manifolds
14
Why $K(X) \longrightarrow G (X)$ is a Poincaré duality for K-theory?
3
Alexander duality and homology equivalence
2
Alexander duality for Homology sphere which is the Geometric realization of a finite simplicial complex
Question feed