How to prove this determinant is positive?

This seems to be true numerically.

Update1: As was shown in below, the above inequality is related to another conjecture $\det(1+e^M)\ge 0$, given a $2n\times 2n$ real matrix $M$ that fulfills $\eta M \eta =-M^T$ and $\eta=diag(1_n, -1_n)$. The answers of Christian and Will, although inspiring, did not really disprove this conjecture as I understood.

Update2: Thank you all for the fruitful discussion. I attached my Python script down here. If you run it for several times you will observe

Update3: Thank you GH from MO, Terry and all others. I am glad this was finally solved. One more question: how should I cite this result in a future academic publication ?

Here are some ideas how to decide the conjecture. (EDIT: In fact these ideas lead to a proof of the conjecture as Terry Tao explained in two comments below.)

As Christian Remling and Will Sawin showed, the conjecture is equivalent to $\det(I+T)\geq 0$ for any $T\in\mathrm{SO}^0(n,n)$.

It's hard to be sure about anything after so many mistakes, but there seems to be some circumstantial evidence that indeed $\det (1+T)$ could be $\ge 0$ on $SO^+(n,n)$. For example, $T_0=-1$ looks like a reasonable starting point that, evolved a little along a suitable flow, should produce a counterexample if there is one, but this isn't working.

Update 2: Thanks also to GH from MO for moral support. So I'll leave it up for now, as a monument to my ignorance (plus who wouldn't like to keep the reputation). I really shouldn't dabble in areas I don't understand. (But amazing what one can learn from an innocuous looking question.)

I believe the OP's conjecture is false. This is going to be a bit light on details. Essentially, I'll elaborate on Terry's and the OP's comments above.

Finally, let me point out that this only shows that the determinant can not be always positive for arbitrarily large $N$; it is still conceivable that this is true for certain small values of $N$.

So if we compute its Lie algebra, and find the associated connected Lie subgroup, then all elements in the Lie group will be limits of these products.

The Lie algebra certainly contains matrices of the form $A_i$ by multiplication. Observe that the commutator is:

I.e. it follows from the fact that every Matrix in SO(n,n) which belongs to the same connected component of SO(n,n) as the identity has a real square root. Update : Not true, see comment of GH from MO and given reference.

It seems that the claim could hold. In particular, we have a sufficient condition under which the claimed inequality holds. Let each $B_i$ be a real $d\times d$ matrix.

Observe that with these eigenvalues we do have $\det(e^M)=1$.

Note: the only time $e^M$ can have an eigenvalue with a negative real part is when $M$ has a complex eigenvalue. But these eigenvalues arise in conjugate pairs, so they match up.

Addendum: I discussed the awesome proof provided by GH from MO and Terry Tao with some of my students, and one of them (Brian Tarasinski) made this diagram which I find quite instructive and want to share with you. 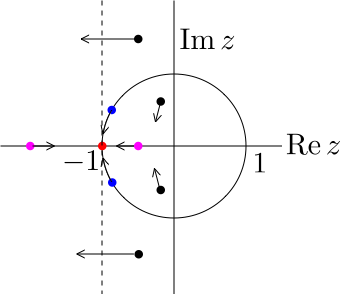 The diagram shows some of the eigenvalues of the matrix $M$ in the complex plane. Colors are used to identify eigenvalues that are paired by the requirement that $z,\bar{z},1/z,1/\bar{z}$ must all be an eigenvalue of $M$. The arrows indicate how the eigenvalues evolve [*] with increasing $N$. We start out (for $N=1$) with all eigenvalues on the positive real axis, so ${\rm det}(1+M)>0$. With increasing $N$ some of the eigenvalues move out into the complex plane, crossing the line ${\rm Re}\,z=-1$, but because they come in complex conjugate pairs (black dots), they still make a positive contribution to ${\rm det}(1+M)$. If an eigenvalue on the real axis passes through $z=-1$, its inverse partner passes through from the opposite direction (purple dots), again without a change in ${\rm det}(1+M)$. The only way ${\rm det}(1+M)$ can change is when a pair of eigenvalues on the unit circle meets at the point $z=-1$ and then takes off along the real axis in opposite directions (blue dots). That this exceptional process is forbidden cannot be deduced from these elementary considerations. (Brian has a derivation, but this is no substitute for the rigorous proof in the accepted answer.)

[*] This idea of a continuous evolution of the eigenvalues as a function of some parameter $t$ is in line with the physics origin of this problem where $M(t)$ is the time-ordered exponential $\exp[\int_0^t A(t')dt']$.

Not the answer you're looking for? Browse other questions tagged linear-algebra matrices determinants block-matrices matrix-exponential or ask your own question.

11
How to prove this determinant is positive-II?
3
eigenvalues of product of many symmetric positive definite matrices

5
Condition for block symmetric real matrix eigenvalues to be real
11
How to prove this determinant is positive-II?
4
dyadically recursive matrices: Part II
15
On the determinant of a class symmetric matrices
8
Does $(2n)!$ divide $\det[(i^2+j^2)^n]_{0\le i,j\le n-1}$ for each integer $n>2$?
2
Matrix eigenvalues inequality (1)
20
Formula expressing symmetric polynomials of eigenvalues as sum of determinants
Question feed