Q. What is the probability that such a random $(d,c_\max)$-polynomial has at least one integer solution? 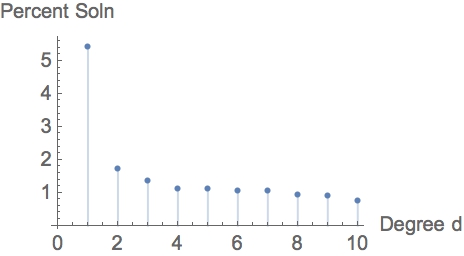 The case of degree $1$ has been handled by quid. This turns out to be an exceptional case, and for all degrees $d\ge 2$ one can show that there is a constant $K(d)$ such that the number of degree $d$ polynomials with coefficient bounded by $C$ and having an integer root is $$ \sim K(d) (2C+1)^d. $$ Moreover, for large $d$, the constant $K(d)$ is approximately equal to $$ 1+ 2 \frac{\sqrt{6}}{\sqrt{\pi d}}. $$ In this approximation, the term $1$ gives the contribution of polynomials having $0$ as a root, and the second term $\sqrt{6/\pi d}$ accounts for polynomials having a root at $1$ (and another similar contribution from those having a root at $-1$). For large $d$, the effect of having roots at integers larger than $1$ in size is substantially smaller.

This problem is closely related to Hilbert's irreducibility theorem.

Serre has proven an effective version of this in his book "Lectures on the Mordell-Weil theorem". See in particular sections 9 and 13.

In particular $0\%$ of such polynomials have a rational root, hence $0\%$ have an integer root.

Not sure this is good enough for an answer, but for $d=1$:

So the asymptotic fraction is $\frac{\log C}{C} $. This is not close for $C=100$, but taking the lower order terms into account it is not that bad.

Doing the actual calculation for $C=100$ one gets $2128$ non-zero polynomials with an integral root, for a fraction of around $5.29$ percent, quite close to the simulation.

My answer to this question suggests that asymptotically the percentage decays with $N$ (standard sieve methods probably say like square root of $N,$ the truth being more like $1/N$), and asymptotically the number should not depend on the degree.

Not the answer you're looking for? Browse other questions tagged nt.number-theory pr.probability polynomials diophantine-equations or ask your own question.

6
Density of polynomials which are soluble with respect to a set of primes
5
How many roots of polynomial in $\mathbb Z[x]$ and $\mathbb Q[x]$ are integers on average?

2
Conditions that allow unique solutions for Linear Diophantine equations
5
Finding unknown integer-valued polynomials using inequalities
2
Hitting times for an N-dimensional random walk on a lattice with (strictly positive) random integer steps
6
Probability of a set of random vectors over finite field being a spanning set
47
Tetris-like falling sticky disks
4
Diophantine equations with infinitely many large solutions
5
Why are the angular differences of these random complex polynomial coefficients almost constant?
5
How many roots of polynomial in $\mathbb Z[x]$ and $\mathbb Q[x]$ are integers on average?
106
Why polynomials with coefficients $0,1$ like to have only factors with $0,1$ coefficients?
Question feed