The main application of Feynman path integrals (and the primary motivation behind them) is in Quantum Field Theory - currently this is something standard for physicists, if even the mathematical theory of functional integration is not (yet) rigorous.

My question is: what are the applications of path integrals outside QFT? By "outside QFT" I mean non-QFT physics as well as various branches of mathematics.

(a similar question is Doing geometry using Feynman Path Integral?, but it concerns only one possible application)

The path integral has many applications:

In mathematical finance one is faced with the problem of finding the price for an "option."

One method of finding the price of such an option involves path integrals. The price of the underlying asset varies with time between when the contract is settled and the expiration date. The set of all possible paths of the underlying in this time interval is the space over which the path integral is evaluated. The integral over all such paths is taken to determine the average pay off the seller will make to the buyer for the settled strike price. This average price is then discounted, adjusted for for interest, to arrive at the current value of the option.

In statistical mechanics the path integral is used in more-or-less the same manner as it is used in quantum field theory. The main difference being a factor of $i$.

where $k_B$ is a constant called the Boltzmann constant. The path integral is then used to determine the average value of any quantity $A(\phi)$ of physical interest

where the integral is taken over all configurations and $Z$, the partition function, is used to properly normalize the answer.

Rendering is a process of generating an image from a model through execution of a computer program.

The model contains various lights and surfaces. The properties of a given surface are described by a material. A material describes how light interacts with the surface. The surface may be mirrored, matte, diffuse or any other number of things. To determine the color of a given pixel in the produced image one must trace all possible paths form the lights of the model to the surface point in question. The path integral is used to implement this process through various techniques such as path tracing, photon mapping, and Metropolis light transport.

Basically, anywhere one uses Monte Carlo methods one is using the path integral.

I usually think of a path integral as just a very glorified and specific version of a simple and general construction from probability. Namely, a path integral is basically an element of an ordered product of matrices belonging to some semigroup. So under this interpretation, "path integrals" are ubiquitous when this sort of object is being considered--particularly in Markov processes. Every time you're computing a multi-step transition probability, you're doing a path integral, and vice versa.

In discrete-time Markov processes you take a power of the transition matrix. Each element of it encodes all the ways in which you can get from the initial to the final state in the appropriate number of steps, along with their proper weights. In continuous time it's the same basic idea, but a bit more involved. The idea is covered here for inhomogeneous continuous-time processes in the course of demonstrating a fairly general form of the Dynkin formula.

Here's the gist in physics:

We can arrive at a formal solution to the Schrödinger equation via a time evolution operator, i.e. $\vert \psi(t) \rangle = U(t) \lvert \psi(0) \rangle$, $U(t) = e^{-itH}$. But equivalently, the quantum initial-value problem is solved once we have the propagator/transition amplitude/Green function $U(x,t,x_0,t_0) = \langle x \lvert U(t-t_0) \rvert x_0 \rangle$, since $\psi(x,t) = \int dx_0 U(x,t,x_0,t_0) \psi(x_0,t_0)$. The transition amplitudes enable us to obtain transition probabilities by the simple expedient of taking squared norms.

Following Feynman, we can also obtain the propagator from the Lagrangian point of view. But the idea is still basically the same.

Feynman Path Integral is connected with saddle point method http://en.wikipedia.org/wiki/Saddle-point_method and stationary phase method http://en.wikipedia.org/wiki/Stationary_phase_approximation . In fact is used as generating function for certain factors in perturbation series. So it can be used wherever this technique may be used, if problem requires certain normalizations. If You are looking for variational solution and You cannot find exact solution, path integral is always an option, specially if You know zeroth configuration, and You want to amount certain perturbations which are polynomial potentials ( because then You may account it as functional derivatives see http://en.wikipedia.org/wiki/Path_integral_formulation#Schwinger-Dyson_equations).

Witten, I think, deserves much of the credit for getting mathematicians interested in the path integral, with his paper Quantum field theory and the Jones polynomial. In particular, path integrals are closely related to questions about (quantum) groups.

For one direction, namely the perturbative Feynman path integral, you should check out Dror Bar-Natan's thesis and later work.

The careful uses of path integral are performed in order to identify the phases of matters beyond the Ginzburg-Landau theory. These new phases include: 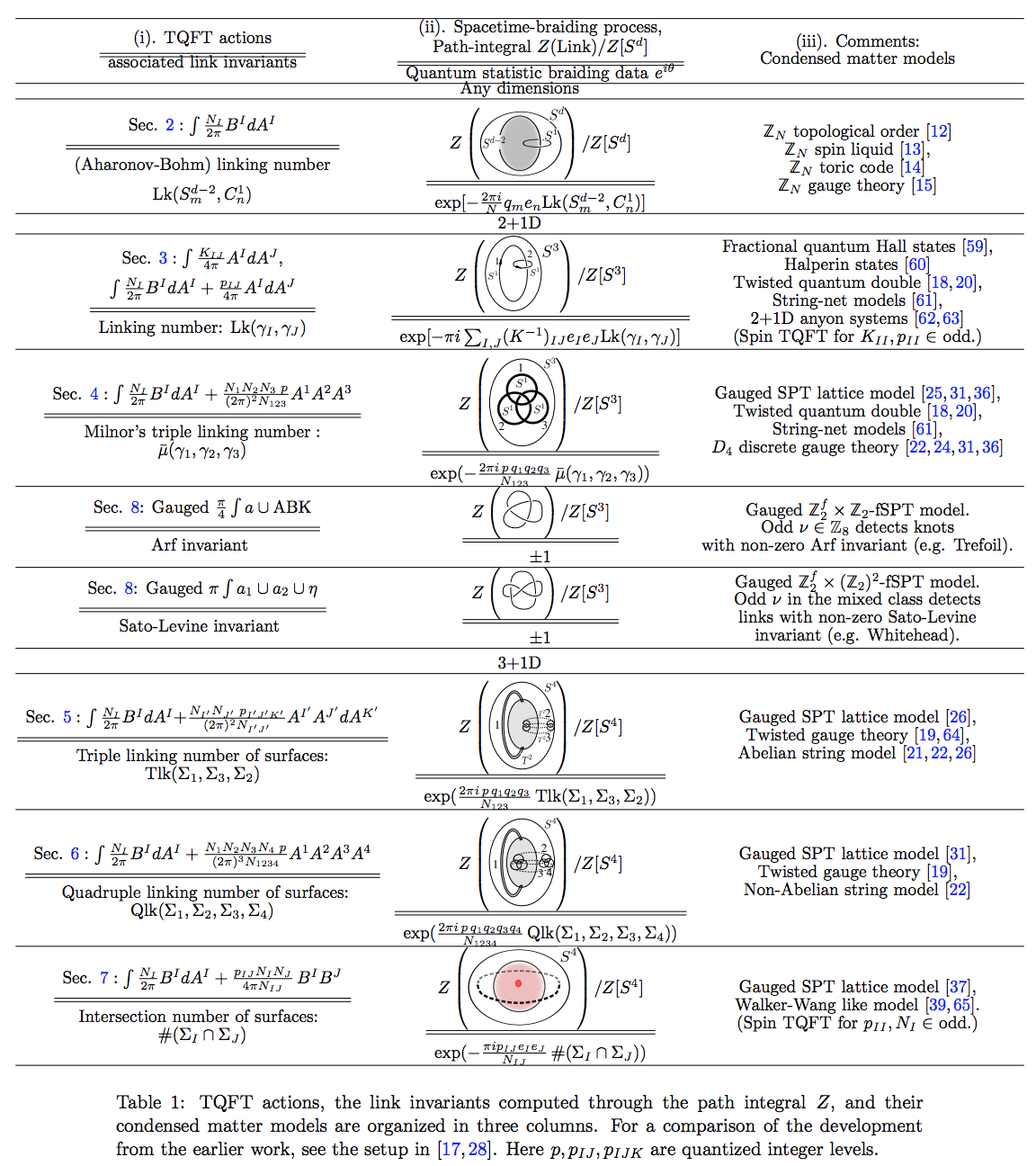 If we understand QFT as the framework that unites quantum mechanics and special relativity, then I'd refer to

One application is to computer graphics. When simulating the effect of lighting a translucent material (see my avatar!) you often need to integrate over all possible paths from the light source to the camera via the material. This is similar to the Feynman integral in quantum mechanics, but note that this is an integral in the domain of classical geometric optics, not quantum field theory.

I believe it was Jerry Tessendorf who pioneered this approach in the graphics world. You may have watched movies with effects rendered using techniques derived from Tessendorf's!

I should add that this is a particular case of what Steve Huntsman describes in his answer.

Some expansions in deformation theory, Lie theory, study of graph cohomology etc. are Feynman integral like expansions and one can formally define "theories leading to them". See for example articles by Dror Bar-Natan for some of such combinatorial and Lie-theoretic aspects. Kontsevich's own deformation quantization formula is usual quantum mechanics is governed by a theory called Poisson sigma model (this was the intuition behind Kontsevich's formula, though he did not explicitly write it that way, but it was later rediscovered by Cattaneo and Felder).

On the other hand, I find very fascinating Sasha Goncharov's "theory" giving a Feynman diagram expansion giving "correlators" formally like in physics, but in fact consisting of Hodge theoretic information on Kähler manifolds:

Not the answer you're looking for? Browse other questions tagged mp.mathematical-physics big-picture quantum-field-theory feynman-integral or ask your own question.

65
Mathematics of path integral: state of the art
91
The mathematical theory of Feynman integrals
7
Proof of PCT theorem for Haag-Kastler nets in QFT
8
References request: constructive quantum field theory
8
One particle irreducible Feynman diagrams
11
Axiomatic QFT, the reconstruction theorem and functional integrals
6
Fermions, their path integrals and effective actions
18
What are the "hot" topics in mathematical QFT at the time?
5
Can Fock spaces be replaced by arbitrary Hilbert spaces under some hypothesis to justify path integrals?
Question feed