My question is simply:

Does $S(x)$ have a provable asymptotic limit?

The question is motivated by the following plot: 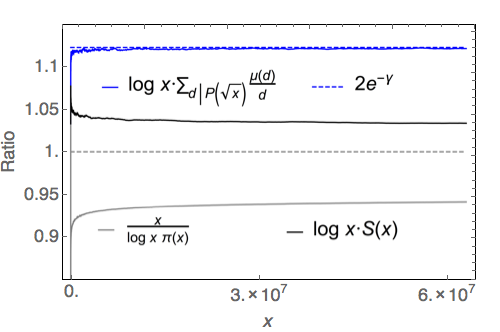 I did check out chapter 4 of Opera de Cribro by Friedlander and Iwaniec. There it appears that at least in terms of the elementary Legendre sieve, it is not possible to prove the asymptotic limit of $S(x)$. It might be that an affirmative answer lies other places in that book, with more powerful sieving methods. I would be glad if anyone could point me to the right place in that case, as it is a rather chunky piece of literature to just browse through.

ADDED 1: Numerically, it appears that the constant $\sum_{k=1}^{\infty} M(k) \log \Big(1+\frac 1k\Big)$ that was stated below in Lucia's answer should be 1, as according to Terry Tao's comment. This is evidenced in the following plot: 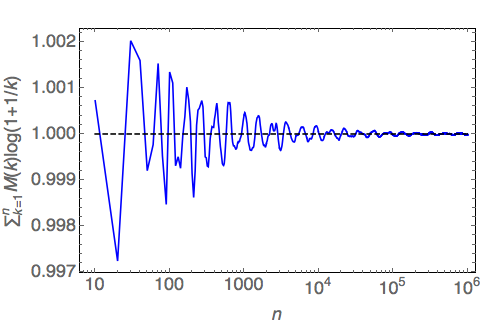 ADDED 2: One could also anticipate the asymptotic limit $$ S(x)\sim \frac{1}{\log x} $$ from the following sloppy heuristic: $S(x)$ can in some sense be seen as the mean value of prime densities below $x$. If we take those densities to be $1/\log x$ around $x$, the average density is simply $\textrm{li}(x)/x$. We know of course that this expression satisfies $$ \frac{\textrm{li}(x)}{x} \sim \frac{1}{\log x}. $$ We might therefore anticipate $S(x)\sim 1/ \log x$. I have added a new version below of the first plot, that also includes the term $\log x \cdot \textrm{li}(x)/x$, revealing that this lies above $\log x \cdot S(x)$. Naturally, we would not expect the two to coincide, as $S(x)$ must interpreted as the mean of a random model where the actual prime distribution is just one specific outcome. 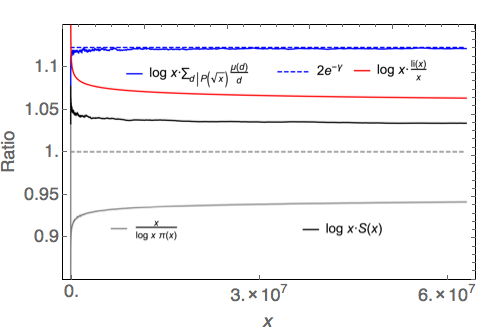 The argument above is a quick sketch, and some details would need to be filled in -- but nothing too hard. The proof follows ideas of Dress, Iwaniec and Tenenbaum and see that paper for further details in a related calculation.

Not the answer you're looking for? Browse other questions tagged nt.number-theory prime-numbers analytic-number-theory or ask your own question.

4
Asymptotic estimate for a random model of primes

8
The large sieve for primes
13
Order of magnitude of $\sum \frac{1}{\log{p}}$
2
Asymptotic estimate of the probability of $(n, P(\sqrt{x})) \leq x$?
3
Arithmetic properties of a sum related to the first Hardy-Littlewood conjecture
2
A truncated divisor sum
10
Asymptotic behavior of a certain sum of ratios of consecutives primes
Question feed