What's the name of this geometric mathematical modeling problem?

There is a right angle corner with width 1 in both directions. One wants to find the largest area shape which can pass through this corner. I know that this is a famous problem, but what is it called?

The Moving sofa problem, I believe.

A supplement to Ian's answer: Here is the largest-area sofa known, due to Gerver:

Added (triggered by @GeraldEdgar's remark). The computational complexity of algorithms grows exponentially in the dimension, about $n^5$ for polyhedral objects with $n$ vertices moving in $\mathbb{R}^3$. Here is an algorithm moving an $n{=}4500$-triangle piano through a challenging apartment requiring several tricky maneuvers: 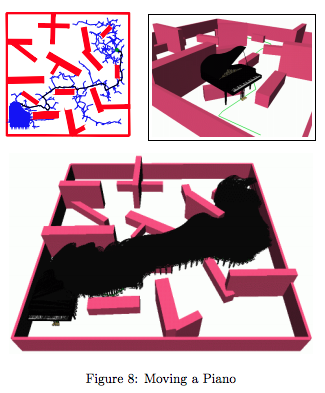 Not surprisingly, the problem is also called The Piano Mover's Problem.