In a conversation where it came up that the Pythagoreans probably found an enumeration of the rational numbers I erroneously remarked that Georg Cantor found a natural bijection from $\mathbb{N}$ to $\mathbb{Q}$ with his pairing function. Is there a natural bijection bethween these sets?

There is a following result which is quite lovely, I think (I don't remember right away whose result this is):

I believe the Calkin-Wilf sequence would work for you. We can construct the Calkin-Wilf binary tree so that the root is $1/1$, and the children of $a/b$ are $a/(a+b)$ and $(a+b)/b$, in order. This contains all positive rationals exactly once, and the path to the root from $p/q$ follows a slow version of Euclid's algorithm for finding the GCD of $p$ and $q$: $(p,q) \mapsto (p-q,q) \textrm{or} (p,q-p)$. A breadth first search through the tree visits the nodes in the order of the Calkin-Wilf sequence.

I always found this to be a cool bijection between naturals and positive rationals. 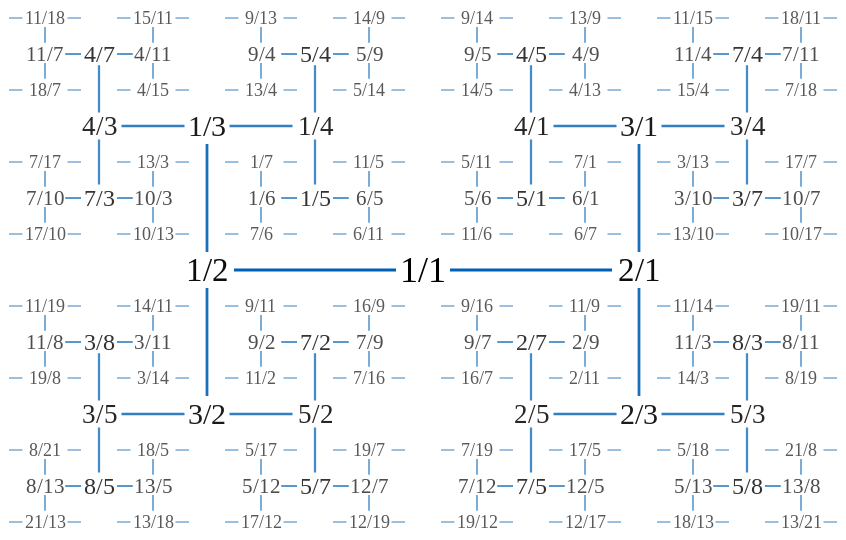 To my aesthetic sensibilities, the Calkin-Wilf tree response is pretty close to optimal, but I'll add some additional glosses. (I only noticed later that Vladimir Dotsenko wrote something similar before me.)

As you can see, the Calkin-Wilf tree is an infinite binary tree; each node of the tree can be identified by a word or finite sequence of letters using the alphabet $\mathbb{2} := \{L, R\}$. There are of course lots of ways of setting up explicit bijections between the set of nodes of this tree and $\mathbb{N}$. The spiral depicted in Burak's answer suggests one possibility; roughly speaking, this is the ordinal sum $\mathbb{2}^0 + \mathbb{2}^1 + \mathbb{2}^2 + \ldots$ where shorter words always precede longer words but words of the same length are ordered according to the dictionary, where letter $L$ precedes letter $R$. Thus the empty word (of length 0) comes first, then $L, R$, then $LL, LR, RL, RR$, etc. A more or less explicit enumeration from $\mathbb{N}_+ = \{1, 2, 3, \ldots\}$ to the set of words (the free monoid $\mathbb{2}^\ast$) is just by binary representation, where each number has a leading $1$ followed by a sequence of "digits" $L$ (the digit zero) and $R$ (the digit $1$).

There are actually a number of fascinating representations along similar continued fraction lines; I could write more, but for now you can read the nLab article. Noam Zeilberger wrote up the section on Calkin-Wilf, and there is also material there on the categorical perspective which involves treating the positive rationals as an initial algebra for a suitable endofunctor, if you want some "natural" perspective.

6
Is it important to distinguish between meta-theory and theory?
9
Stability for the Gödel and Jensen hierarchies
6
When does "sufficient genericity" actually suffice?
3
Can we go in the direction opposite of Cantor's arguments for cardinal comparisons between sets belonging to disjoint hierarchies?
6
Are ordered and unordered pairing functions "definably equivalent?"
Question feed