I am working on an implementation of Raymond Hemmecke's algorithm for finding generating sets of cones: http://arxiv.org/abs/math/0203105

Unfortunately I am struggling to make the algorithm work on the simple examples. Consider a cone given by a bunch of vertices in $\mathbb{R}^2$: 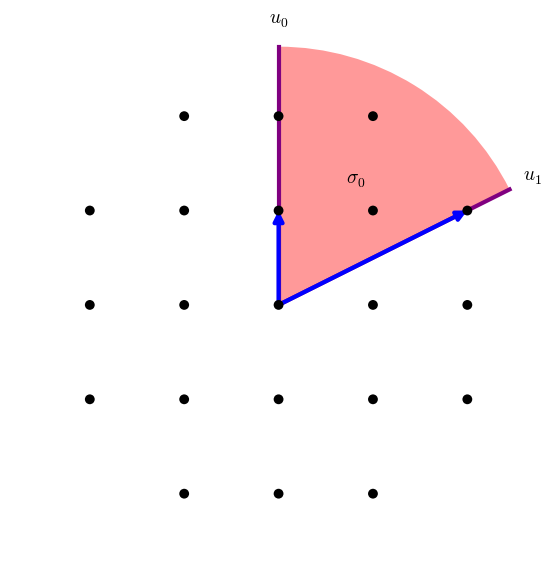 There are several things blocking me at the moment:

Does anyone have any experience with the ray algorithm? I have looked at the Macaulay implementation, but it uses Fourier-Moutzkin, I would like to use the method described by Hemmecke, but unfortunately I think I am missing something. I have tried running 4ti2 on these examples, but I get no results at all - the program returns an empty generating set.

[edit] The goal is to use the algorithm to compute the Hilbert basis given the generators of a cone, like in section 5.5 of the paper. I.e. given the picture above, get me the Hilbert basis of the red area. With the homogeneity restriction I struggle to define my generating sets in a sensible way - I am given the vectors in the kernel, but I don't have the linear map $A$. If my input consists of 4 2-dimensional vectors like above, I can't possibly come up with a map from $RR^2$ to $RR^2$ that the red cone as its kernel. My supervisor said I am going to need to embed it in a higher dimensional space, but I don't really see how to do it sensibly.

One possible set of rays or $\mathbb{R}$-generators of the cone above is (reading as rows) \begin{bmatrix} 2&1\\ 0&1\\ \end{bmatrix} This doesn't satisfy $Ax= 0\quad x \geq 0$. On another hand this cone is uniquely defined by the y axis and the ray bisecting the cone into two equal pieces (or a halfspace defined by the normal vector that bisects the cone), is that how I bring it to a homogenous system?

To put it more clearly, I want to compute the Hilbert basis of the red cone, but I do not know the linear transformation that has the red cone as its kernel. All I have is a (not necessarily minimal) generating set of points of the cone.

Tomasz, I think you are mixing something here. You wish to compute the extreme rays of a cone given by generators? (This would mean you wish to throw away redundant generators, right?)

However, the algorithm that you wish to implement does something completely different! It takes a system $Ax=0$, $x\ge0$ (defining a pointed rational cone) and computes the cone generators or the Hilbert basis, in case you are interested in the integer situation.

PS: If you wished to compute the Hilbert basis of a cone given by cone generators, I recommend using Normaliz.

8
Centralizers in GL(n,p)
3
Binary subspace membership testing with signed vectors
2
Is the kernel of a Moore Matrix in $\mathbb F_{q^n}$ determined by the linear dependencies of the generators over $\mathbb{F}_q$?
2
Memory usage of Gröbner basis computation
2
Polytopes and polyhedral cones in complex Euclidean space
7
Iterating projections to random halfspaces
Question feed