What is the Hausdorff dimension of this fractal?

The graph shares some characteristics with some fractals in Wikipedia's List of fractals by Hausdorff dimension. For $(b,c)=(3,2)$, it looks like so: 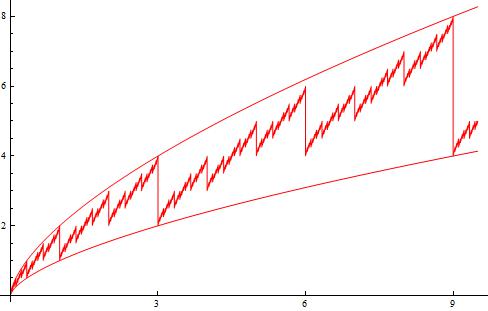 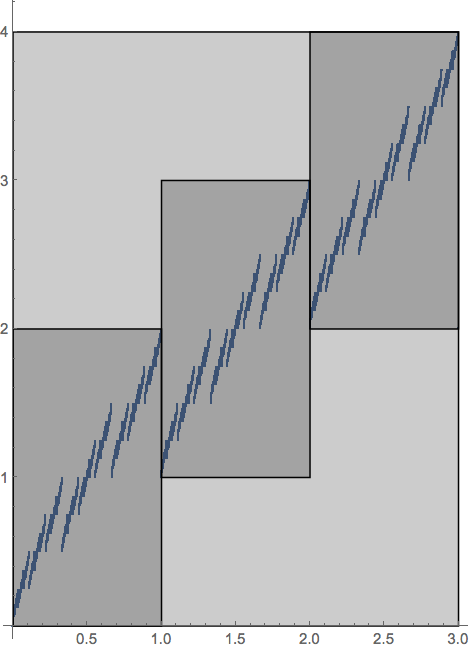 The three smaller rectangles indicate the action of the IFS on the larger rectangle. The invariant set $K$ of that IFS is, by definition, compact. The graph $G$ of the function $f$ is not closed, however, as $f$ is not continuous; I think it's a mistake to connect the dots as in your linked image. The points of discontinuity are exactly those that have multiple base $b$ representations. The set $K$ contains points with both possible $y$ values but, again those countably many points won't affect the dimension.

Falconer has a formula to compute an estimate to the dimension of a self-affine set that often yields the exact result. It's quite a bit more complicated than the corresponding result for strictly self-similar sets and there are special cases where it gives only an upper bound. For a set in the plane whose dimension is known to be at least 1, we use the so-called singular value function:

where $\alpha \geq \beta$ are the singular values of the linear part of $f$.

and, furthermore, that this number $s$ is an upper bound for the box dimension of the set $E$. In the case we have here, the expression inside the limit on the left simplifies considerably, since all the functions have the same, diagonalizable linear part. In fact, it's just $$\left(b^k/\left(c^kb^{k(s-1)}\right)^{1/k}=b\left/\left(c b^{s-1}\right)\right.\right..$$ Setting this equal to one and solving for $s$ we get $s=2-\log(c)/\log(b)$, in agreement with Martin's answer.

Recall that the singular values satisfied $\alpha \geq \beta$. That is, they are ordered. Thus, an implicit assumption here was that $b\geq c$. Otherwise, the formula returns a result smaller than 1, which is clearly incorrect. In the case where $b<c$, the function $f$ is strictly increasing so it has bounded variation. The dimension of the graph must be exactly 1. Here's an illustration for $(b,c)=(2,3)$. 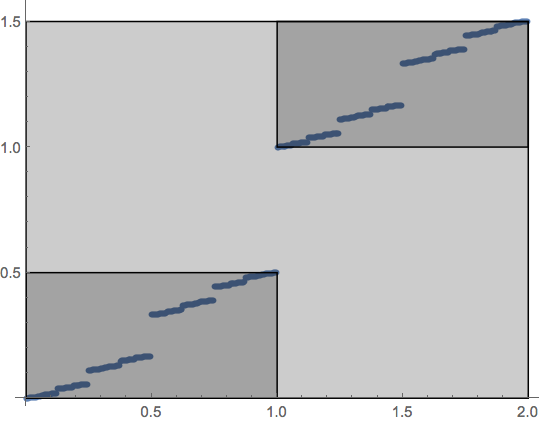 Finally, I think the situation might be more difficult when $b$ is not an integer. Here's an illustration for $(b,c)=(\pi,2)$. 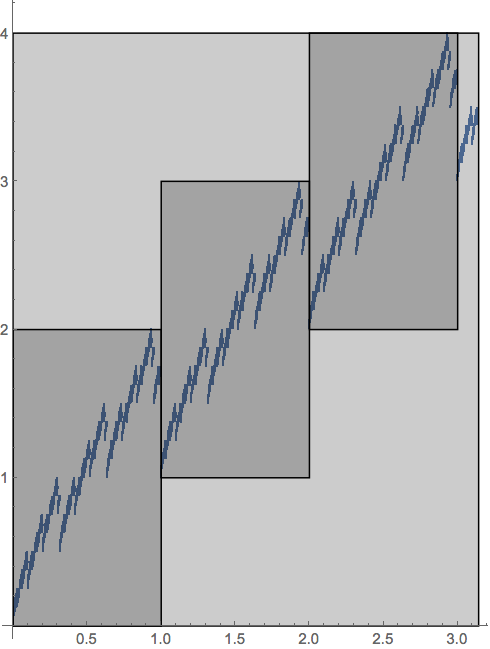 The three boxed parts are indeed affine images of the whole but there's a small part left over. I believe that the remaining small part together with the whole form a digraph fractal pair. I haven't bothered proving this, though, since a major problem is likely to arise due to the introduction of a new affine transformation with radically different linear part from the others.

Given the result in "The Lyapunov dimension of a nowhere differentiable attracting torus" by Kaplan, Mallet-Paret and Yorke, the natural conjecture for the Hausdorff dimension of the graph of $f$ would be $2 - \log(c)/\log(b)$ (take $q(t) = \lfloor t\,\text{mod}\, b\rfloor$ in their introduction).

Not the answer you're looking for? Browse other questions tagged nt.number-theory sequences-and-series geometric-measure-theory fractals or ask your own question.