Had the assymptotic behaviour of T(N) been studied ?

or the existence of nontrivial cycles.

If the sequence converges, it therefore seems hopeless to prove this with elementary means.

As Stefan Kohl has pointed out it is not possible to give good lower bounds for $T(N)$ without making progress on the Collatz problem itself. However it is not difficult to understand what the truth is, and the argument below will yield a rigorous upper bound.

Instead of the map $C(n)$ as defined, it is better to consider $C_0(n) = n/2$ if $n$ is even, and $(3n+1)/2$ if $n$ is odd. For large $n$, this map multiplies by approximately $1/2$ or $3/2$ with probability $1/2$, and the first several iterations of the map behave independently. The crux of the Collatz problem is that this independent behavior roughly persists till the end making the iterates come down to zero -- that of course is hard, but it is easy to see that as many initial iterates as you like will behave independently just by looking at residue classes modulo a large power of $2$.

Now consider the random walk starting with a random real number $\alpha_0=\alpha$ chosen uniformly from $[0,1]$, and setting $\alpha_k = \alpha_{k-1} \times 3/2$ or $\times 1/2$ with equal probability. Then for each such realization take the max of $\alpha_k$ over all $k\ge 1$. In this setting you are asking for the probability that this maximum is at most $1/2$. (The half arises because of the difference between your $C(n)$ and the more natural $C_0(n)$.)

It is easy to upper bound the probability above by running the random walk for some number of steps. After $25$ steps, a computer calculation gave the upper bound $0.40641\ldots$, which agrees with Stefan Kohl's numerics.

(Without any intended answer:) Two further pictures.
First, a bit more detailed curve up to $N=100 000$. I supressed the datapoints $T(N)$ at $N$, where the frequencies are below $6$ here to have the curve a bit more sharpened/showing the peaks in the underlying frequencies-list: 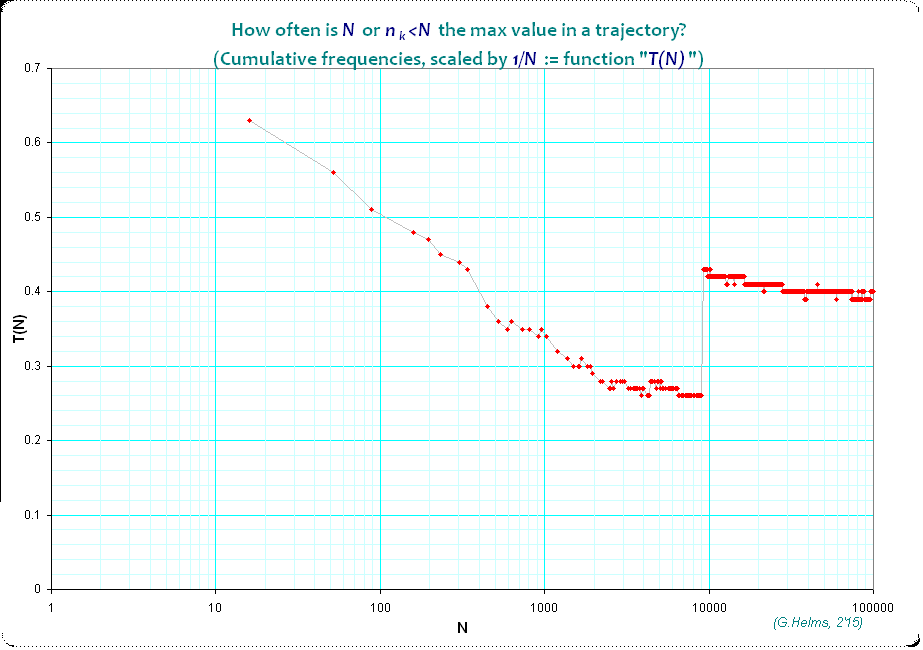 And it seems to me, that the actual frequency of occurence of N as maximum of a trajectory gives some more intuition what's going on here. While the above cumulative curve tends to "iron out" any variability when going to the right, the systematic spikes of the frequencies-table here indicate, that such spikes do not wear out in the long run but (likely) even get higher counts (again I left out the datapoints of smaller frequencies in the picture): 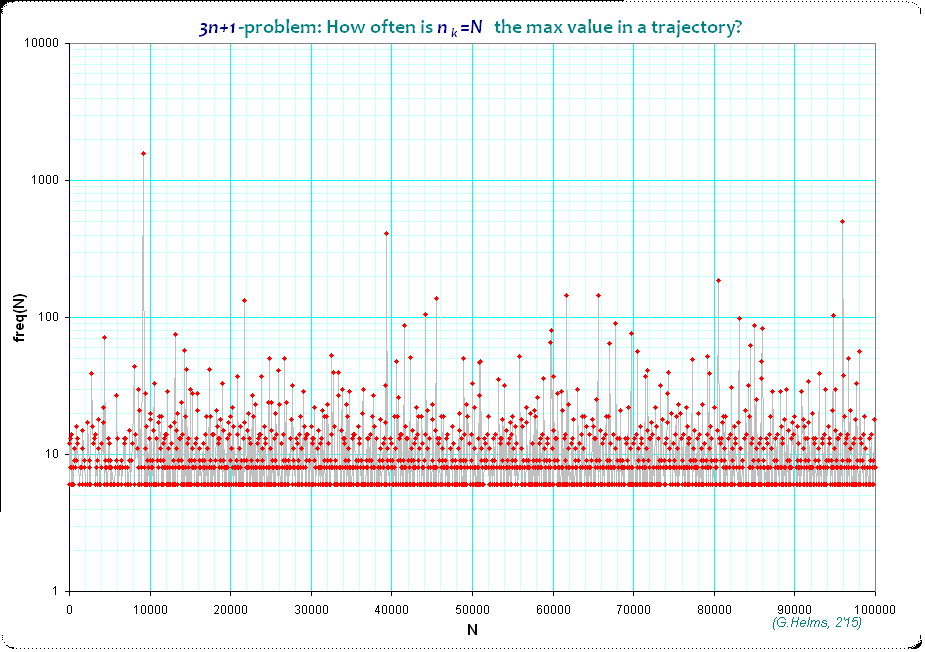 Here is a plot of Stefan Kohl's data (now supplemented by Paul Broussous), which they kindly provided in response to my query: 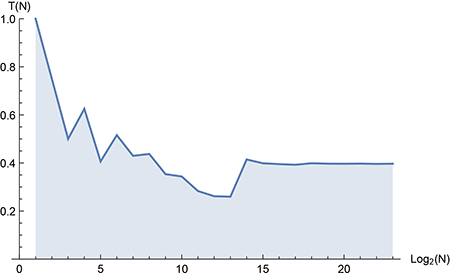 Added as per TMA's suggestion: 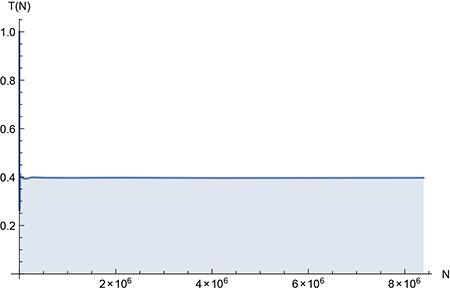 Not the answer you're looking for? Browse other questions tagged nt.number-theory ds.dynamical-systems or ask your own question.

10
A question about primes as an additive basis
6
A follow up question related to entropy
7
convergence in $\hat{\mathbb{Z}}$, modulo prime power
6
Conjecture on Odd Perfect Numbers
2
On $\sum_{\substack{p\leq x\\p,p+2\text{ twin primes}}}\frac{(\log p)^m}{p}$, on assumption of the first Hardy–Littlewood conjecture
Question feed