Why is the gradient normal?

This is a somewhat long discussion so please bear with me. There is a theorem that I have always been curious about from an intuitive standpoint and that has been glossed over in most textbooks I have read. Quoting Wikipedia, the theorem is:

The gradient of a function at a point is perpendicular to the level set of $f$ at that point.

I understand the Wikipedia article's proof, which is the standard way of looking at things, but I see the proof as somewhat magical. It gives a symbolic reason for why the theorem is true without giving much geometric intuition.

I would also appreciate some connection of this intuition to Lagrange multipliers which is another somewhat magical theorem for me. I understand it because the algebra works out but what's going on geometrically?

Finally, what does this say intuitively about the generalization where we are looking to: maximize $f(x,y)$ where $g(x,y) > c$.

I have always struggled to find the correct internal model that would encapsulate these ideas.

If I move infinitesimally in the direction v, what happens to f?

So dxf is not itself a tangent vector. However, as we have an inner product lying around, we can convert it into a tangent vector which we call ∇f. This represents the question:

What tangent vector u at x best represents dxf?

What we mean by "best represents" is that u should satisfy the condition:

For a generic x and a generic f (i.e. most of the time), the set of tangent vectors at x which are tangent to the level set of f at x is codimension 1 so this specifies ∇f up to a scalar multiple. The scalar multiple can be found by looking at a tangent vector v such that f does change in the v-direction. If no such v exists, then ∇f = 0, of course.

If you are standing on a level set and want to walk some small distance d and get as far as possible from the level set, you want to walk along the normal. Otherwise, if the path you take has a tangent component, it will tend to keep you closer to the level set if d is small enough compared to the size of the level set. Furthermore, getting as far as possible from your level set is approximately the same as walking to the highest/lowest level curve in range, with the approximation improving as d shrinks.

This is essentially Andrew Stacey's answer, but a bit lower level. This is the story I actually try to get my calculus 3 students to understand.

Now we are interested the curve $F(x,y) = 0$. Given a point $p=(x_1,y_1)$ on this curve, the tangent direction will be the vector $h$ for which $D_{F,p}(h) = 0$, because to stay on the curve, the value of the function should not change to first order. Using the geometric interpretation in terms of dot products, we can see that $\langle \dfrac{\partial F}{\partial x} \dfrac{\partial F}{\partial y} \rangle \cdot \langle h_1, h_2\rangle = 0$, or geometrically that the gradient is perpendicular to the tangent direction!

As for Lagrange multipliers (taking the geometric interpretation of the gradient as given), I think the best way to see what's going on is to consider the 2-variable case. The idea is that you're generally constrained to some curve g(x,y)=0 (which is just a particular level curve of the function g(x,y)). Consider the level curves of the objective function f(x,y). If, moving along the constraint curve, we happen to be crossing one of these level curves of f(x,y), then (subject to the constraint) we are either increasing or decreasing the value of f(x,y). Therefore, we cannot be at a local extremum. So, a local extremum must occur where g(x,y)=0 is tangent to a level curve of f(x,y). This is equivalent to the condition that vectors perpendicular to the curves point in the same direction: grad(f)=λgrad(g).

Kim, remember the level sets' names in practical applications are isoclines, isotherms, isobars, isoutility curves: they are loci of places which all share the same (scalar) value, say 3000 feet elevation. 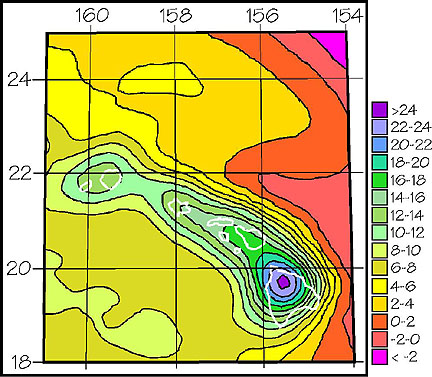 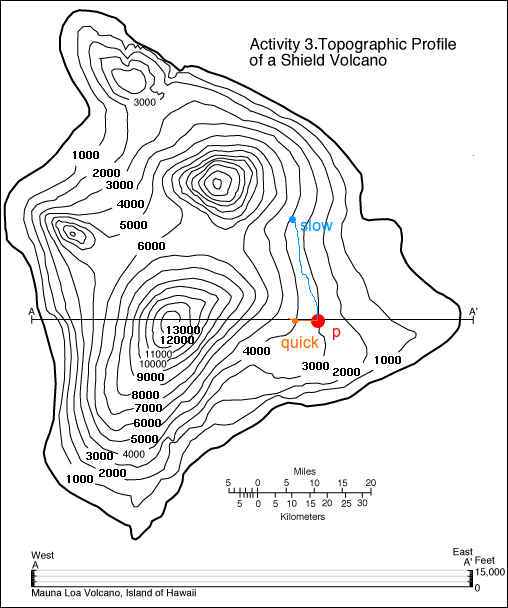 If you take this concept to the infinitesimal limit of slightly-higher level sets you get the gradient at $p$.

Alternately you can imagine that someone cut a walkable path on the side of the mountain. It's walkable because it's completely flat, i.e. it follows a level curve (constant height). Walking north near my red $p$ look to your left. You are looking straight uphill. This is the gradient direction.

Now keep in mind this is just one gradient at one point. Maybe you heard of a gradient field which sticks an uphill arrow at every point in the surrounding area. If you can envisage the gradient field of the pictures above (from volcano.oregonstate.edu) then you'll know you've got the concept.

edit: The original picture I was linking to moved; here are some more topographic maps. 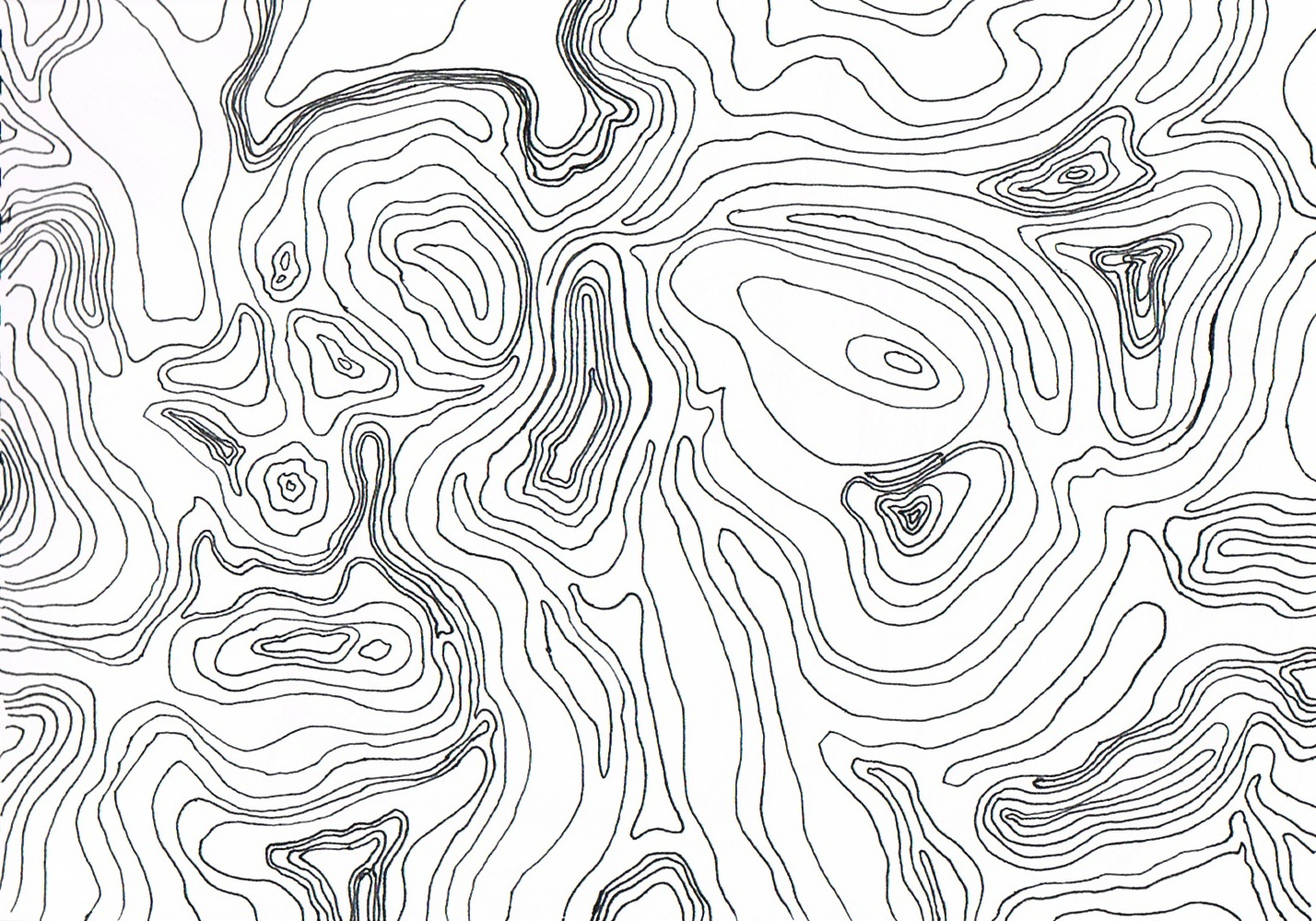 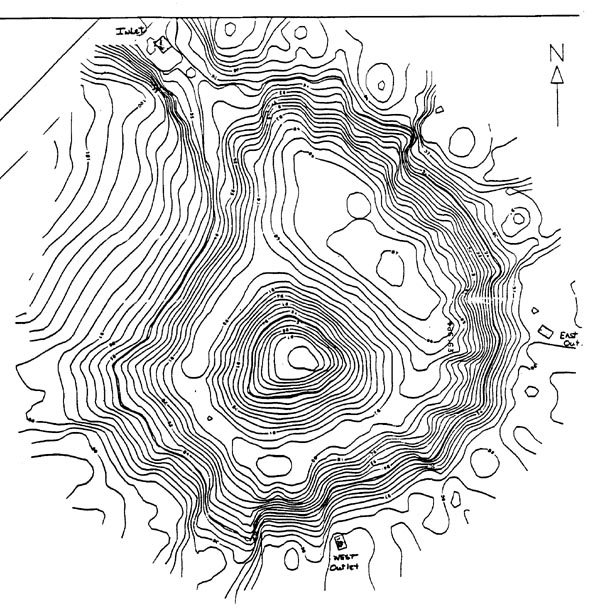 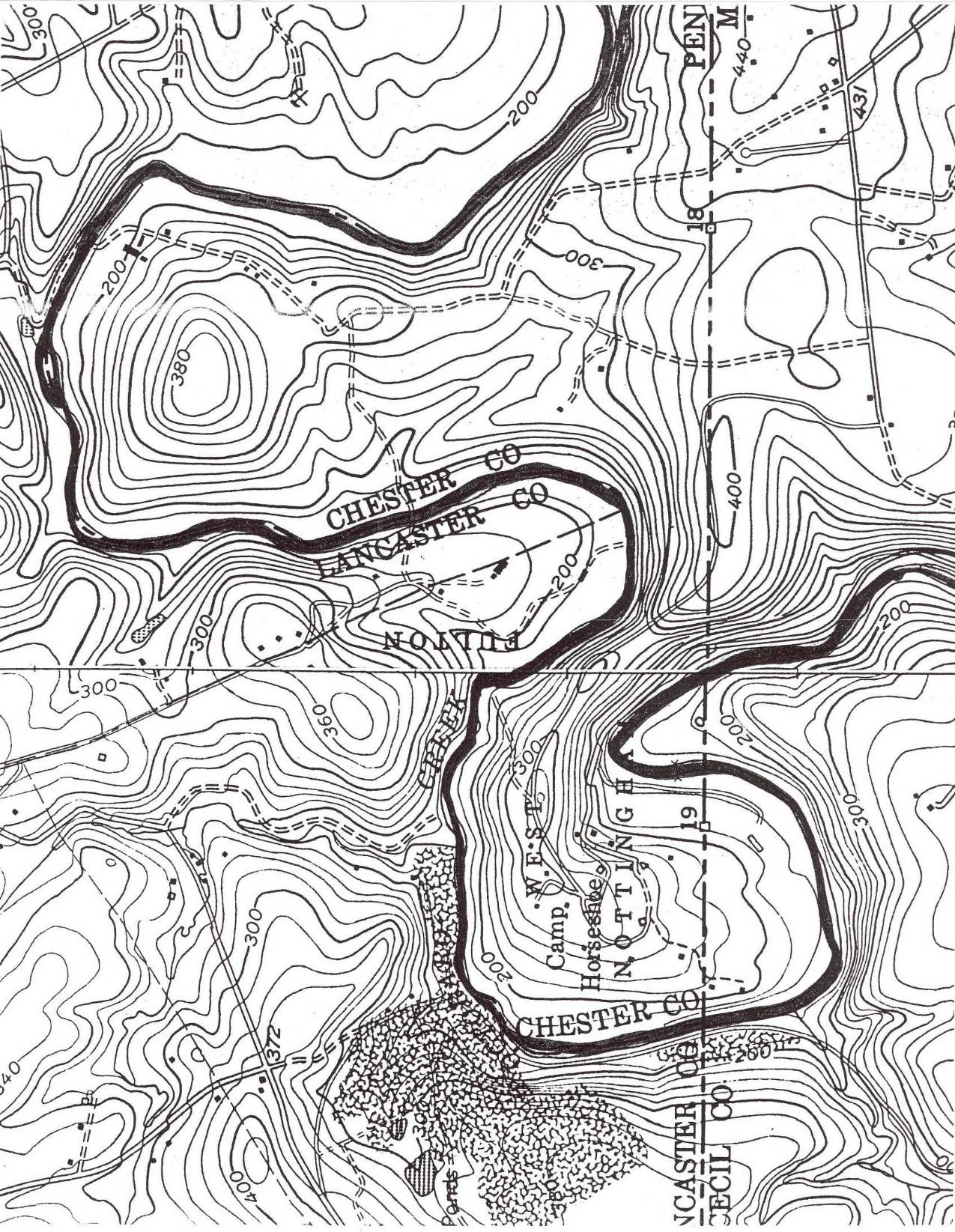 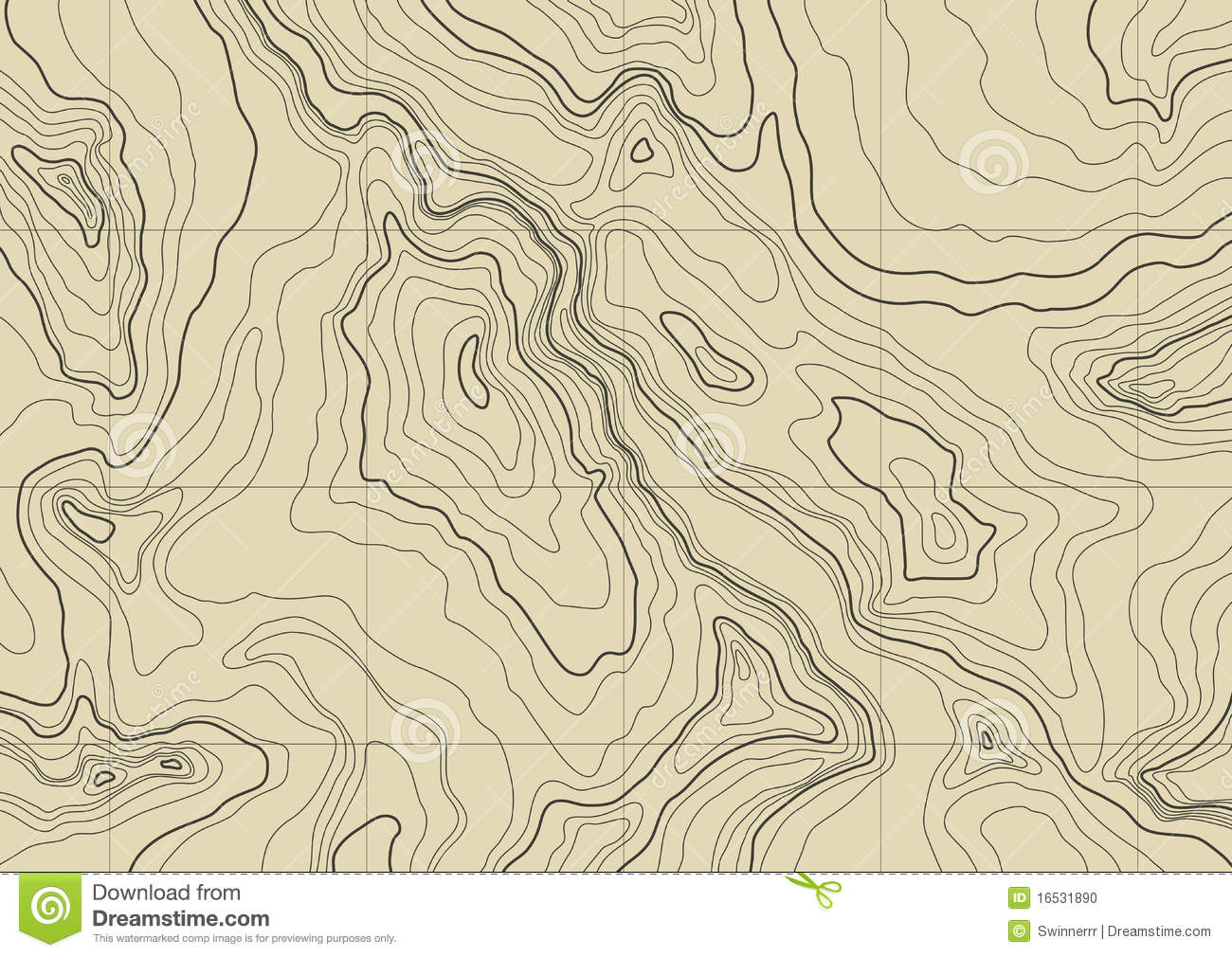 A very useful way to think about the gradient (or more generally, the first derivative of any function on some Euclidean space) is as "the thing that gives you the best linear approximation to the function at a given point." More explicitly, If p is some point in space, then if you want to approximate f by a linear function near p in the best way possible, then you should take your linear function to be:

where f'(p) is the gradient at p. (That generalizes, by the way, to vector-valued functions: then f'(p) is a linear transformation, not simply a vector.) The point is that if you look at your function very closely near the point p, then it looks more and more like that linear function, and the approximation just gets better as you look closer. In particular, that linear approximation completely captures both the direction of the level curve of f through p and the direction of fastest growth. Now you should visualize a linear function of two variables, whose graph is simply a slanted plane, and it should be obvious that the level curves (which are horizontal lines embedded in the plane) are perpendicular to the slant of the plane, if you're visualizing it correctly.

One subtlety that my explanation doesn't completely cover is what happens when the gradient is zero: that would give you the linear approximation

i. e., constant. Of course, the function f may not literally be constant near p, so you might still want to know what the level set looks like and where the fastest growth is. To get that information, you will have to use the higher derivatives. All the gradient tells you is that:

(1) the fastest growth, wherever it is, is slower than any linear function if you're close enough to p, and
(2) the level set through p is "probably" experiencing some sort of singularity there, like self-intersection, or possibly degenerating to a single point (in the case of a local extremum).

For a function z=g(x,y) of two variables and for most points, there is a neighborhood of the point at which the level curve g(c,d)=K can be written as the graph of a function y=f(x) --- that is a local thing. So the perpendicular to the tangent of that graph (f'(c),-1) is up to a constant the gradient of g.

Finally, consider the case of a linear function. z=Ax+By. The vector (A,B) is perpendicular to the line Constant =Ax +By.

The proof I usually see: Choose an arbitrary unit length tangent vector on the level set, and write it with coordinates. If you take the inner product of this vector with the gradient, the sum you get is the definition of the directional derivative along that vector, and therefore zero.

I think there is a more geometric way to think of it by taking a linear approximation to your function near a noncritical point, and restricting the linear function to a sphere. After a suitable rotation, the extrema lie at poles, and the level set lies at the equator.

Not the answer you're looking for? Browse other questions tagged ca.classical-analysis-and-odes intuition geometric-intuition or ask your own question.

159
What is convolution intuitively?