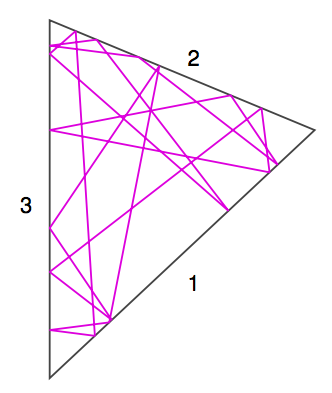 For example, in an acute triangle, its pedal triangle is a simple periodic path, and the only such.

To be narrowly specific: Might every regular polygon have a simple periodic path?

Here is a rather revised answer. I originally thought that having a line of symmetry (bisecting one or perhaps two edges ) might be a sufficient condition. Joseph showed a convincing counter-example to my reasoning. And Alexandre's observations finished it off. Here is what I can salvage and add.

1) On the left below is a variation of the right triangle construction showing that a convex (or simply not too badly reentrant) polygonal table with a right angle has a simple periodic billiard path of the form $abcdcba.$ There are arbitrary further sides not shown.

One might require that a path touch all the sides in order to avoid arbitrary modifications which don't affect the path.

2) The top middle diagram is an isosceles triangle table with a path $bacab$ and another $defgfed.$

I'll now restrict to polygons with a simple periodic polygonal billiards path touching each side.

3) A construction given for (acute) isosceles triangle applies to arbitrary acute triangles. Drop the perpendicular from each vertex to the opposite sides. There is a path touching at just those points.

As Alexandre showed, any convex polygon can be a path and the path determines the polygonal table up to similarity (if we require equal number of sides. Will pointed if the path has angles $\alpha_1,\alpha_2,\cdots,\alpha_n$ then the table has angles $\frac{\alpha_i+\alpha_{i+1}}2.$ This provides a necessary condition for a table to have a path. It is a sufficient condition for a circularly ordered lists of angles to be realized by some tables having a path.

5) For quadrilateral tables we see that opposite angles must add to $\pi.$ That is a strong condition (strong enough to demolish my conjecture.) However I have drawn a quadrilateral below with angles $\frac{\pi}4,\frac{\pi}2,\frac{3\pi}4,\frac{\pi}2.$ It is only slightly modified from a right triangle with no path. Since the angles are rational it should be possible to determine if it has a quadrilateral path. But I doubt it does.

6) Regular polygons have polygonal paths. The final table is pentagonal with all angles $\frac{3\pi}5.$ It even has a central line of symmetry. However I again suspect that it does not have a path of the type we seek. 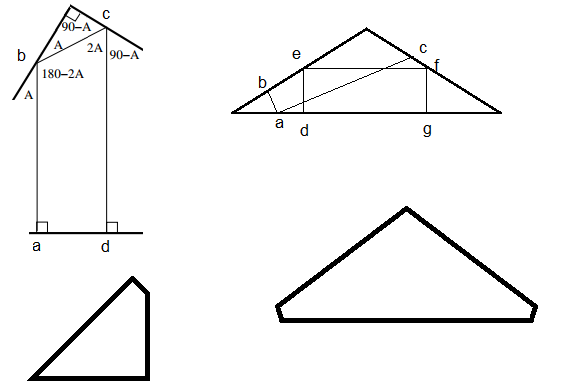 An example that may be difficult for Aaron's line-of-symmetry argument:

Consider the simple polygonal billiard path itself. It is a polygon and it is convex, because all interior angles are less than $\pi$. Now start with an arbitrary convex polygon. It is a billiard path on some polygonal table. Indeed, the lines from which the reflections happened are uniquely determined by our billiard path. Continue these lines until they intersect and form a table. Of course this table is not unique, because you can add arbitrarily many sides which lie outside of the polygonal path and do not intersect our polygonal path. Neither the resulting table, nor the path itself has to have any symmetry.

EDIT. If the table is a triangle with acute angles, then a simple billiard path exists, is unique, and it is the triangle whose vertices are the bases of the three heights of the table-triangle. This is due to H. A. Schwarz. (See Courant-Robbins, What's mathematics, Ch. VII, sect. 4). On the other hand, a triangle whose one angle is $\geq\pi/2$ violates the inequality noticed in Will Sawin's remark: the angles of the triangular table must satisfy $\alpha+\beta-\gamma\in(0,\pi)$ for a simple billiard part to exist.

Not the answer you're looking for? Browse other questions tagged gt.geometric-topology ds.dynamical-systems billiards polygons or ask your own question.

60
Tying knots with reflecting lightrays
5
Are periodic billiard trajectories stable on a manifold with strictly convex boundary?
10
Periodic billiard paths in hyperbolic triangles
9
Existence of periodic orbits in rational billiards
3
A Really Simple Stochastic Dynamic Billiard
5
Example of a non-arithmetic Veech surface (other than regular polygon)?
7
Under which conditions do ellipsoids have a focal property?
30
Why is the billiard problem for obtuse triangles so hard?
Question feed