Numerical evidence suggests that the complex zeros of:

all reside on the line $\Re(s)=\frac12$, except for a finite few outside the critical strip. These zeros come in pairs that each "embrace" a non-trivial zero ($\rho$) of $\zeta(s)$ infinitely tightly. Obviously $f(\rho)$ induces a pole.

The function can rewritten into:

so that it will vanish when:

When $\Re(s)=\frac12$ both sides will be real and the RHS decreases quickly and monotonically towards zero. Therefore, assuming the RH, each $\rho$ will induce two increasingly nearby 'neighbour' zeros when it pierces through the 'close to zero' RHS-line (see graph below for $\rho_1$). To my surprise I found that $f(s)$ seems to have only one additional zero in the strip at $\frac12 \pm 0.581221780239... i $ that is unrelated to a $\rho$. 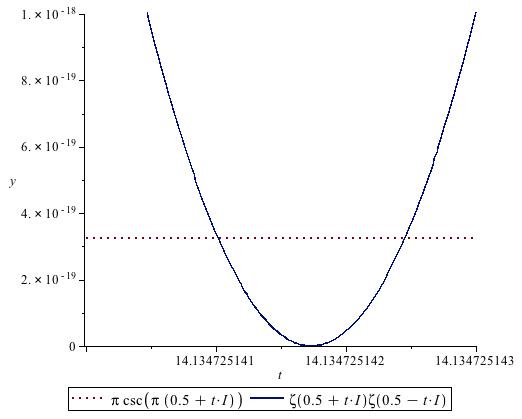 EDIT: Additional thought (doubt if useful, but I share it anyway):

The following relation must be true at hypothetical zero of $f(s)$ lying off the critical line: