Let suppose function $g(s,t)$ satisfies partial differential equations: $g_{ss} g_{tt} - g_{st}^2=0$. It may be treated as the surface has zero gaussian curvature. I am searching for general solution of this equation locally. Are there any results for it?

A surface of Gaussian curvature zero is locally isometric to the plane, and is said to be developable. A complete surface of Gaussian curvature zero in Euclidean three space is a cylinder (where a cylinder means the surface generated by the lines parallel to a given axis passing through a fixed curve in the subspace perpendicular to the axis; the plane is a cylinder in this sense when the curve is itself a line). This is due to Pogorelov, although it is usually attributed to Hartman-Nirenberg (they attribute it to Pogorelov). It can be found proved as Theorem 1 in W. Massey's Surfaces of Gaussian curvature zero in Euclidean $3$-space or in part II of Hartman and Nirenberg's On spherical image maps whose Jacobians do not change sign (Hartman and Nirenberg prove a more general result, for hypersurfaces in Euclidean space of arbitrary dimension). The papers of Massey and Hartman-Nirenberg contain more detailed results applicable to the incomplete case. Corollaries $3$ and $3^{\prime}$ of Hartman-Nirenberg show that every point of a $C^{2}$ surface of Gauss curvature zero has a neighborhood which admits a parameterization of the form $x = a(u)v + b(u)$ where $(u, v)$ varies over some simply-connected plane domain and $a$ and $b$ take values in $\mathbb{R}^{3}$. (see also chapter IX of the English translation Extrinsic Geometry of Convex Surfaces of a book of Pogorelov.)

Let me explain you very briefly what is happening there.

This information is nothing unless you use the fact that $B$ satisfies homogeneous Monge--Ampere equation (i.e., the fact that it has zero Gaussian curvature). It means (thanks to Pogorelov) that you can draw some family of line segments close to the boundary $\Omega$ which start from the curve $(f_{1}(t),f_{2}(t))$ and go inside the $\Omega$. Moreover the function $B$ is linear along these segments and the gradient of $B$ is constant along these segments. The typical picture of these family of segments is given here (see the picture below) 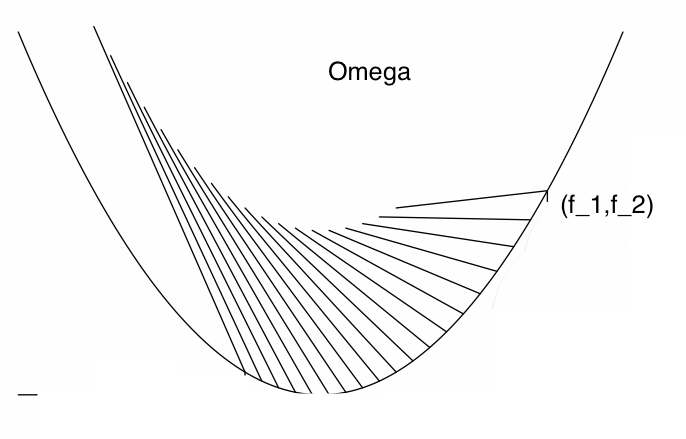 This picture close to the boundary of $\Omega$ is true if the things are not degenerate (i.e., torsion of $\gamma$ does not vanish on any subinterval $I$) then the domains, where $B$ is linear, cannot touch $\partial\Omega$ on a thick interval. however they can touch $\partial \Omega$ at some finite number of points (or countable number of points if the torsion of $\gamma$ changes sign infinitely many times).

Now there are lot of questions left:

Some partial answers are given in the articles that I mentioned above.