Discovery and Study of Conic Sections in Ancient Greece

Is there anything known about what drew the attention of ancient greek mathematicians to conic sections and, what were the models they used to study conic sections? What I would like to know, is whether ancient mathematician actually became aware of conic sections by looking at sections of circular cones or, whether they noticed them elsewhere, e.g. as the shadow of a coin or (highly speculative) even in the way that gardeners created interesting shapes with two sticks and a rope?

I know that Apollonius of Perga wrote a thorough treatise about conic sections (cf e.g. http://en.wikipedia.org/wiki/Apollonius_of_Perga), but did he also discover them and how did he study them?

Discovery: Menaechmus is credited with the discovery of conic sections around the years 360-350 B.C.; he used them to solve the problem of "doubling the cube". The construction required a parabola, which he called "a section of a right-angled cone", and a hyperbola, "a section of an obtuse-angled cone". (The names parabola and hyperbola themselves are due to Apollonius.) [1]

Origin: Euclid notes in his Phaenomena that a cylinder cut by a plane not parallel to the base results in a section which resembles a "shield". Eratosthenes implied that Menaechmus arrived at his sections by cutting a cone "in triads".

In connection with the suggestion of the OP that "the shadow of a coin" might have led to an early observation of conic sections: It is quite possible that the ancient Greeks would have been aware of conic sections when constructing sundials, since a sheaf of light rays is a cone which is cut by the plane of the horizon in a hyperbola, and a portion of that hyperbola is then marked out on the sundial [2]. 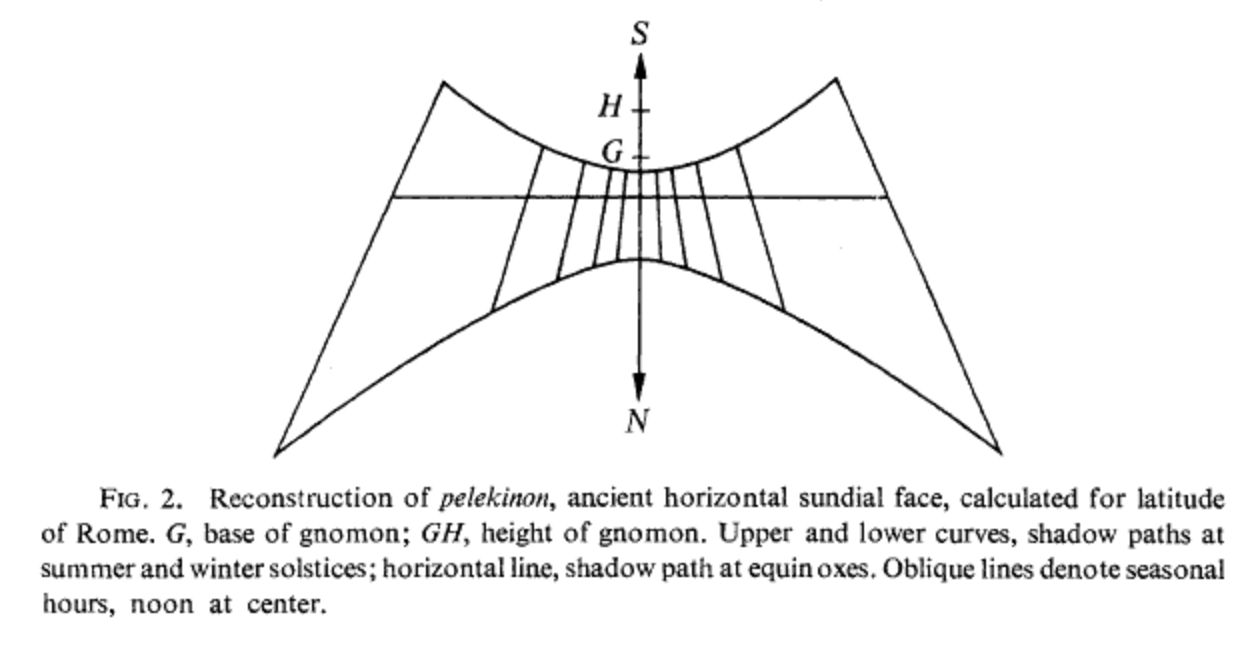 One may speculate about the circumstances that might have led Menaechmus to discover the curves. Conceivably he could have developed the idea from observing a volcano, or an anthill scuffed off by his sandal, or some artefact like a sharpened stake. However, there is much to recommend the conjecture [going back to Philippe de la Hire, 1682] that the sundial was the most probable basis for discovery of the conics: A dial traced on an appropriate oblique plane could show all three conics at any latitude.

Euclid's Optics presents the visual cone with the apex at the eye as a geometric model for the appearance of things. In Optics various results are deduced about the appearance of flat surfaces below the eye and above the eye. See Figure 10 on page 359 in Burton’s translation, referenced below for a possible evidence that the visual cone might be intersected by a vertical plane in order to explain certain visual phenomena . Propositions 38-40 on pages 365-367 in Optics show how the circular base of a visual cone appears under certain circumstances. Although not expressed as "conic sections" the visual effects are described for acute and right and obtuse angle cones which correspond to whether the circle at the base of the visual cone is being viewed from a point on the hemisphere above the circle (right angle cone) , a point above the hemisphere (acute cone), or a point within the hemisphere (obtuse cone).
The first four books of Apollonius' Conics are generally believed to have drawn heavily from an earlier lost work by Euclid, also called Conics. It is believed that like Euclid, Apollonious also studied astronomy and optics. Geometrical optics, and the model of the visual cone, was used to study relationships between the apparent size, position, or motion of an object and its actual size, position, or motion. 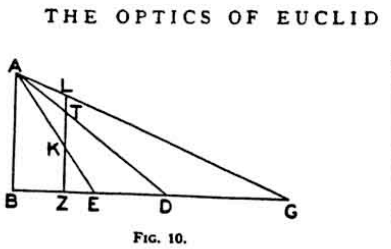 Not the answer you're looking for? Browse other questions tagged reference-request ho.history-overview conic-sections or ask your own question.

5
In the classical construction of conic sections, where does the axis of the cone intersect the plane?
4
Ancient method to study Archimedean spiral
1
Empty real conic containing two pairs of conjugate points in the projective plane?
9
A chain of six circles associated with a conic
17
How did ancient greek geometers represent solids?
4
Is it a new method to construction of a conic, how can prove?
1
Thirteen-point conic and four-point line, are they new?
Question feed