I want some recommendation on which software I should install on my computer. I'm looking for an open source program for general abstract mathematical purposes (as opposed to applied mathematics).

I would likely use it for group theory, number theory, algebraic geometry and probably polytopes.

The kind of program I have in mind is Mathematica or Matlab. Although probably those are not designed for abstract mathematics.

Here are some links.

GAP is fantastic for group theory, combinatorics and and number theory. Sage is becoming very popular and essentially includes GAP as well.

The kind of program I have in mind is Mathematica or Matlab. Altough probably those are not designed por abstract mathematics.

What would be extremely useful to the progress of abstract mathematics would be a library of mathematical algorithms which were formally verified for correctness. Results obtained via such a library could be routinely cited in research papers without any doubt as to their correctness. The authors of SAGE suggest open source software as a means of achieving "research grade" mathematical software in [ http://www.ams.org/notices/200710/tx071001279p.pdf ][ http://wstein.org/mathsoftbio/history.pdf ], but arguably they don't go far enough.

None of the "open source" mathematical software mentioned here currently meets this standard; the closest is C-CoRN [ http://c-corn.cs.ru.nl/ ], a library of constructive mathematics for the Coq proof assistant.

Now don't get me wrong, building a comprehensive library of formalized mathematics covering even the undergrad curriculum would be a vast undertaking. But the benefits would be huge, not just for computational mathematics but for all kinds of mathematical practice. The main obstacle is the nature of the work involved, which tends to be tedious and offering little reward to professional mathematicians, if occasionally playful and addictive. Perhaps undergraduate students should be encouraged to take courses in logic and contribute to such efforts.

Kenzo and Chomp are for computing homology. Kenzo for instance can take an arbitrary abstract simplicial complex and compute the simplicial homology groups, and it has various spaces already built in. You can compute the homology of products and other neat things with it.

For commutative algebra and algebraic geometry, in addition to the already mentioned CoCoA, there is Singular.

For all sorts of Groebner bases-related computation (I believe you might need some at least for questions in algebraic geometry), I would recommend Bergman (http://servus.math.su.se/bergman/).

I'll second the votes for Sage, Macsyma as Maxima and Wxmaxima, Scilab, Octave, R, and GAP.

For kids to play with are KGeometry KiG (K-interactive-Geometry), letting you draw out geometric relationships and actively move points around, letting all defined subcomponents change with it: e.g. draw three points, define+draw the line segments between the points, define+draw the perpendicular bisectors of these line segments, define+draw a circle that touches the three points of the triangle. Now drag any of the three points of the triangle around and watch all of the defined components move along to remain the bisectors / intersections / circles consistently. It's a great way to play around with geometric constructions.

Also, you can't go wrong with using awk, sed, and bash on the command line.

The only mathematical software I've learned to use so far is gnuplot, which does 2D and 3D plots.

It's very easy to use, at least for basic tasks such as "plot $x \log(x)$ for $0 \leq x \leq 1$". It comes ready-installed on many Linux distributions.

I am using SAGE for computing over elliptic curves. It is very convenient and has lots of implementations of algorithms. But I have not found a way to instal in under windows environment without virtual box.

Michael Rubinstein's lcalc is a fast and easy-to-use program for calculating values of L-functions including the Riemann zeta function. It can be downloaded from:

I like kig. Very useful software for simple geometric constructions. Also it can help if you want to make a figure for a paper.

I like LiE for computations with Lie algebras, especially roots and weights computations, plethysms,... It also has a web form interface.

We are taught to use Sage to replace Matlab and Mathematica, now it also supports the online version via web browser which is very convenient and cross-platform.

In addition, Sage is python based, it's easy to combine python programming which is more and more popular in scientific computation nowadays.

REDUCE is also an interesting free computer algebra system to have a look at. It allows especially quantifier elimination by means of Redlog library (http://redlog.eu) The following is from the REDUCE homepage (http://reduce-algebra.com):

REDUCE is an interactive system for general algebraic computations of interest to mathematicians, scientists and engineers. It has been produced by a collaborative effort involving many contributors. Its capabilities include: 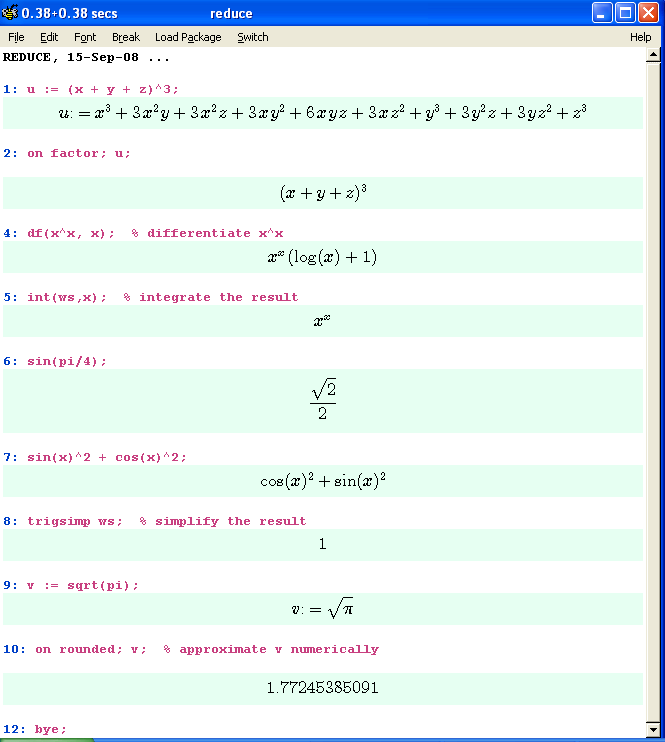 Rubinstein's lcalc is part of Sage

Scilab (http://www.scilab.org/) is also numerical software which is free and open source, akin to Octave and Matlab. It's been developed at INRIA and ENPC. I also highly recommend Octave for numerical analysis and statistical analysis.

Maxima is also on many gnu/linux installations and can be used in a text window or terminal without any graphics. The WxMaxima front end works in a graphical-user-environment and has better visualization of formulas and allows for menu-level interaction, instead of having to have all of the commands memorized.

I can't believe that Python and its vast scientific application libraries are not mentioned in this thread. Let me be little bit bias and mention projects like PyDSTool. What makes Maple or Mathematica language simpler than Python? Similarly time proven but proprietary computer algebra system MuPad now a part of MATLAB is not mentioned. FreeMat, the cleanest (other two being GNU Octabe and Scilab) reimplementation of MATLAB API, is also not mentioned. PostScript, page description language (arguably proprietary), is not mentioned. It is wonderful language for teaching geometry and programming pictures.

P.S. I was surprised that people even mentioned things like Maple and Mathematica. I personally have not meet a person who had a look at the source code of these two systems. However, I have friends who have worked for MathWorks and have seen the source code of MATLAB.

Haven't yet tried it out, but Julia seems to be an interesting recent language with focus on (fast) mathematics.

I would recommend SCaVis (Scientific Computation and Visualization Environment). First, it is Java and runs on any platform. I has a nice editor and you can program in 4 scripting languages (including Python, Ruby). The graphics includes 3D. There is also about 300 examples and very extensive SCaVis online manual which covers

and all of this can be integrated with plot canvaces in 2D and 3D.

DataMelt numeric software is close to what you need. This math program is free and includes many numeric libraries.

Not the answer you're looking for? Browse other questions tagged soft-question big-list computer-algebra mathematical-software or ask your own question.