The Riemann--Hurwitz Theorem (among others) implies that if a tract $D$ of $p$ (namely a component of the set $\{z:|p(z)|<\epsilon\}$ for some $\epsilon>0$) contains all the zeros of $p$ in its bounded face, then all the critical points of $p$ are contained in $D$.

This question was originally asked on M.SE, where it received no answers, however user Behavior did point out that this conjecture could be equivalently stated as:

Very interesting problem. At first I thought the statement might be true for real valued polynomials, but unfortunately I found the following, 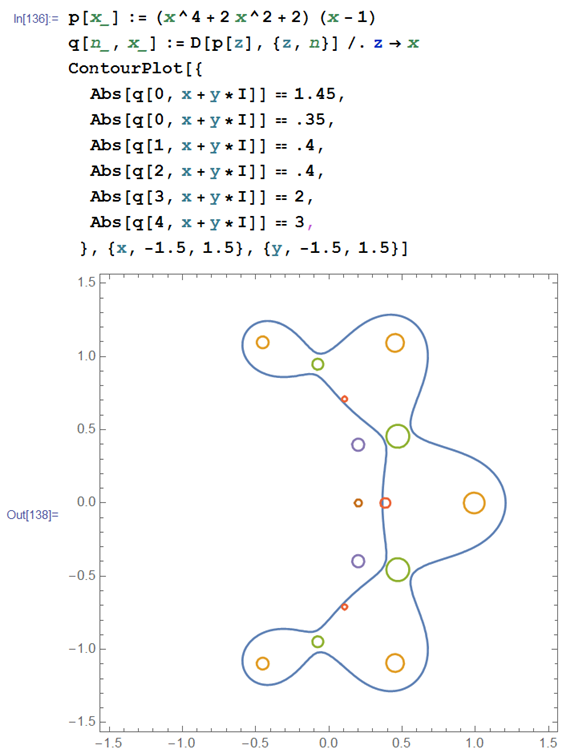 Unless I am misunderstanding the problem, I believe this is the counterexample you were looking for. Although, we note that the second derivative does look suspiciously still trapped inside of the tract. Maybe, your conjecture holds for only the first and second derivative.

I believe that your conjecture is incorrect. Let me give you an indication why this should be true. (I am not claiming that this is a rigorous proof, although I believe one could be furnished with enough attention. However, knowing that the result should be false, it may be easier to find an example in some other way.)

Firstly observe that, if true, your statement would imply the same for entire functions with a finite set of singular values (critical or asymptotic values). Indeed, such a function f can be approximated, in the sense of locally uniform convergence, by polynomials with the same singular values. (The prototype of this is the convergence of unicritical polynomials (1+z/d)^d to the exponential map; in general, this can be shown using the concept of so-called "line complex"; see the final chapter of the book by Gol'dberg and Ostrovskii.)

Obviously, if a higher derivative of f had a zero that was outside of the disc in question, then the approximating polynomials would also.

Now, if you let M be the maximal modulus of a singular value, as in the final version of your conjecture, then every component of $V = \{z\in\mathbb{C}: |f(z)|>M\}$ is mapped to the punctured disc $W = \{|z|>M\}$ as a universal covering map. Your conjecture would imply that the higher derivatives of this map have no zeros, but you clearly cannot expect this. Indeed, essentially any such covering can be approximated in a suitable sense by a corresponding one coming from an entire function with bounded or even finite singular sets; see my paper on "Approximation by Eremenko-Lyubich functions" (Proc. LMS), and Chris Bishop's far more sophisticated work on "Models for the Speiser class". While there is some work on the details required, it seems pretty clear that you can make examples this way - although I doubt it is the easiest route ...

I hope this makes sense, and apologies if I am missing something.

Not the answer you're looking for? Browse other questions tagged polynomials cv.complex-variables critical-point-theory or ask your own question.

41
Polynomial roots and convexity
4
The Poisson-kernel in the plane and polynomials
8
Objections to and arguments for the simplicity of all Riemann zeros
1
On the geometry of roots of a sum of complex linear fractions
5
Starshapeness of polynomial tracts with respect to the (entire collection of) critical points contained in the tract
16
“Local” Gauss-Lucas theorem?
3
Star-shapeness of polynomial tracts containing a single zero
4
A possible generalization of Gauss Lucas theorem to higher dimension
Question feed