Background information: the book "Advanced Calculus" by Sternberg and Loomis says the answer is negative - you have to impose an additional requirement on $n(\cdot, \cdot)$ for that to hold. However, no example is given in the text nor the exercises. Can you give me an example of such a pathological norm $n$ that fails to induce a honest normed vector space on $X \times Y$.

This is only an illustration to Christian Remling's beautiful answer; here are the concentric "balls" around the origin for this "norm": 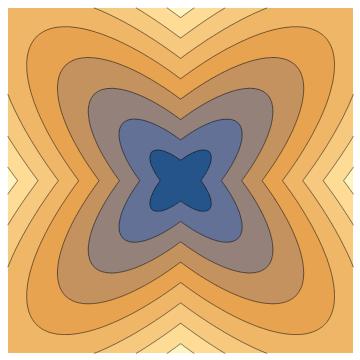 This is a comment rather than an answer but I am not entitled. The missing requirement on the two dimensional norm for the statement to be valid is that it be increasing in the natural sense that if $|x|\leq|x_1|, |y|\leq|y_1|$, then $n(x,y)\leq n(x_1,y_1)$. Norms without this property can easily be obtained by rotating a non-circular ellipse in standard position (as in the above answer).