When exactly and why did matrix multiplication become a part of the undergraduate curriculum?

The story about Heisenberg inventing matrices and matrix multiplication in 1925 is very well known and well documented. A few weeks later, Born and Jordan read this work and recognized matrix multiplication, because one of them happened to take a course in "hypercomplex numbers" in his youth. This is how modern quantum mechanics was born.

This story clearly shows that in the second decade of the 20th century matrix multiplication was not something that every undergraduate was familiar with.

But an even more interesting question is

My conjecture is that this has something to do with the invention of Quantum mechanics. I have some arguments explaining this. But to test my arguments, I would like to know the answer to the first question, and other opinions on the second.

I understand that this may not be within the scope of this forum. Feel free to close. But I am asking in hope that someone by chance knows the answer to question 1, and will answer before the question is closed.

EDIT. Using Mathscinet, Zentralblatt and Jahrbuch, with "linear algebra", "lineare Algebra" etc. in the title, and year $< 1950$, I found a Turkish textbook of Pasha and Tefvik (1893), a textbook by H. Bohr and J. Mollerup (1938) and Russian text by Malcev (1949), from which I studied as an undergraduate. After 1950 there are many, which suggests that this curriculum revolution probably started in the early 1950s.

EDIT2: Google Ngram shows a sharp growth of the usage of the word "matrix", which begins in the middle 1940s. Against my expectation, it shows a peak in 1990 and then starts declining.

A similar question is posted on HSM

The article by J.-L. Dorier in On the Teaching of Linear Algebra suggests the answer to your question will be different for the UK and for continental Europe:

In an attempt to answer your question more directly, I have searched for early University text books that introduce matrix multiplication. It was introduced in the context of the theory of determinants, to write the product of two determinants as a single determinant, in the text Corso di Analisi Algebrica from 1886. This is part 1 of the course, called "Introductory theories", so it may well have been intended for undergraduates. 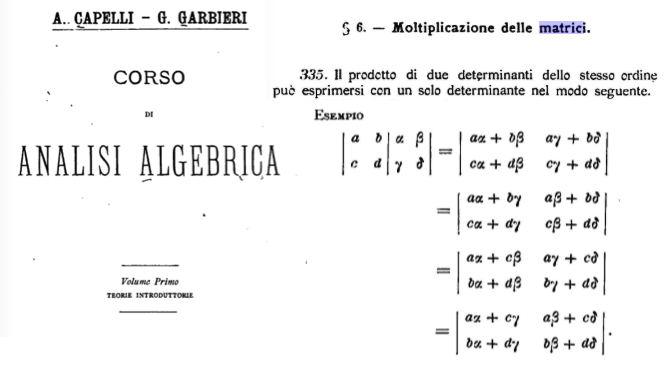 Too long for a comment, but this premise of the question:

is indeed wrong. Gauss in Disquisitiones Arithmeticae (1801) has something called not matrix multiplication but combination of substitutions — e.g. he writes near the end of §294: 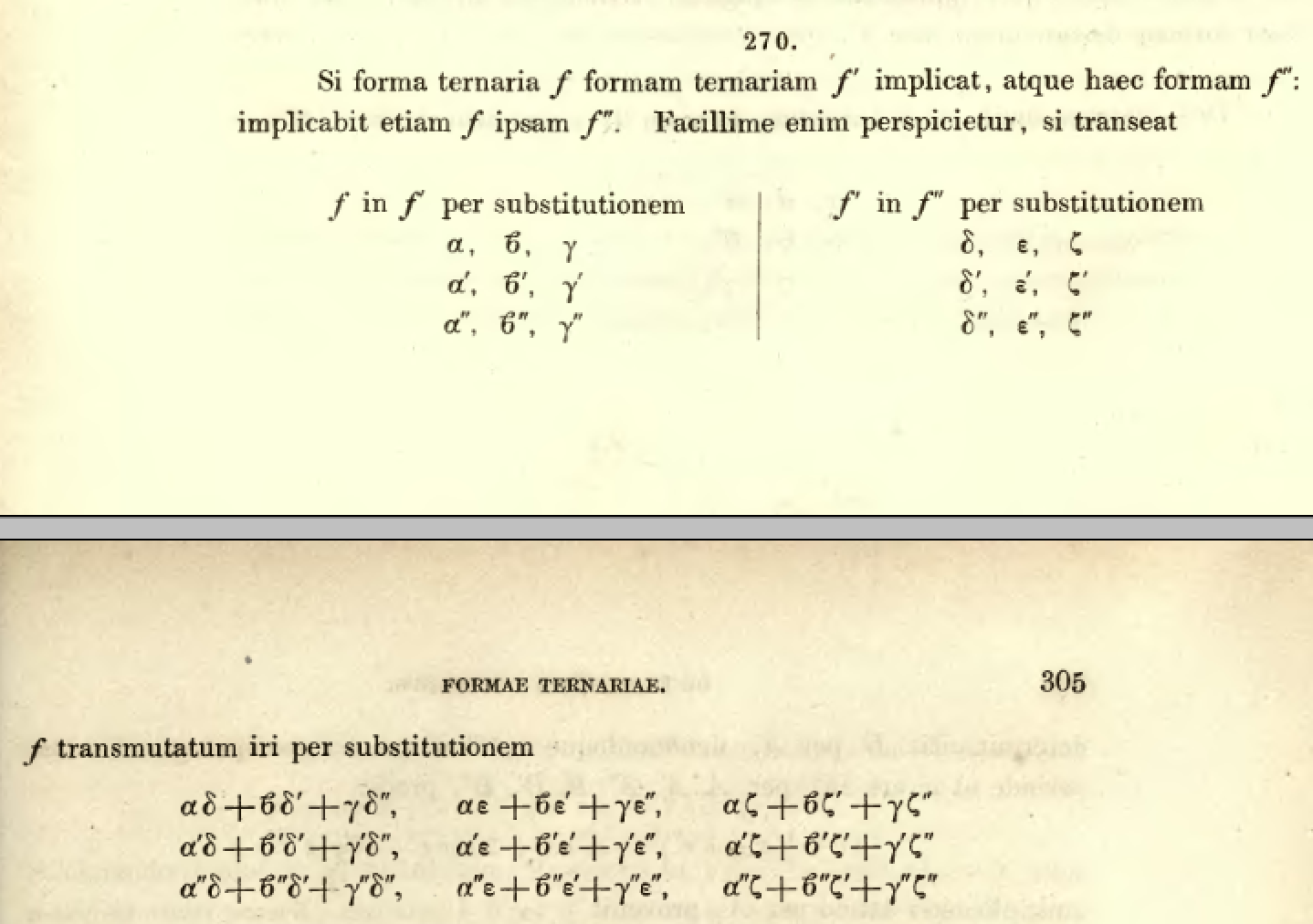 Birkhoff and Mac Lane's 1941 "Survey of Modern Algebra" had a chapter on "The Algebra of Matrices". That book was influential in US curricula, and it would be a good place to look.

TL;DR: In the US, matrices and matrix multiplication probably became an expected part of the curriculum for engineering majors ca. 1970, and I would guess that the reason for this was its applications in electrical engineering and materials science.

19th Century: Through the 19th century, most physicists customarily wrote all equations component-wise. This covers Maxwell, and seems to have continued at least as late as 1905, because Einstein wrote his original paper on relativity in very awkward notation, without the use of vectors. There was a period when some theorists in physics were pushing a quaternionic system, but it was never widely used by physicists, much less by working electrical engineers. Hamilton's huge book on quaternions was known as the book that lots of people owned but nobody ever read.

Early 20th Century: The influential vector presentations of physics began when Gibbs and Heaviside simplified the useful aspects of the quaternionic system into the modern vector-scalar system, which was published in an influential 1901 text by Wilson. However, this seems to have taken a very long time to filter down into the curriculum. For instance, I have a copy of the 1927 edition of Elements of Physics, by Millikan and Gale. I believe this was the most popular introductory physics text in the US at that time. The word "vector" never appears, and we have on p. 64, "A force is completely described when its magnitude, its direction, and the point at which it is applied are given." In other words, the definition is such that forces don't even obey the ordinary law of vector addition, because there is a third datum, the point of application. There is no conception being presented of a more general abstract algebraic concept, just a specific definition of a force.

Middle 20th Century: I checked out some old UC Berkeley catalogs in order to see what the later historical situation was in the US.

In the 1959-60 catalog, there are two linear algebra courses in the math department:

In the 1969-70 catalog, there is a lower division linear algebra course, Math 11C. However, none of the required courses for an engineering degree seem to have 11C as a direct or indirect prerequisite. Probably by this time many engineering students were taking 11C -- otherwise I don't see why it would need to be moved from upper division to lower division -- but it wasn't required.

It's implausible that this change ca. 1970 had anything to do with Heisenberg's discovery ca. 1927 that quantum mechanics could be done using matrices. Not only is the gap in time very long, but if you look at modern treatments of quantum mechanics in physics books aimed at sophomore engineering majors, they don't make use of any linear algebra. In fact, it's more common to see matrices popping up when mutual inductance and mutual capacitance are introduced, but I think most texts do this without using the word "matrix" and without ever introducing matrix multiplication.

Current situation in the US: Here is my impression of the current situation in the US, which differs from the comments in the middle of question 1. At my school, the math sequence taken by STEM students goes like this: calculus of functions of a single variable; functions of several variables, including div, grad, and curl and differential equations; linear algebra. The linear algebra course is placed at the very end, presumably on the theory that it's a higher priority for engineering students to learn vector calculus in time for their course in electromagnetism.

Students in the US may get exposed to matrices in a high school pre-calculus course, but I don't think this is standard or highly emphasized. I believe that math textbooks used for functions of several variables usually assume no knowledge of linear algebra, even though this often makes the exposition of the subject extremely awkward.

There are some historical UK high school syllabuses at http://www.cambridgeassessment.org.uk/our-research/archives-service/past-exam-material/. Two by two matrices are in the 1984 O Level (taken at age 16) but not in the 1974 O Level or A Level (the latter taken at age 18). I don't know where you would find good data about undergraduate syllabuses.

Not the answer you're looking for? Browse other questions tagged linear-algebra mathematics-education physics ho.history-overview or ask your own question.

24
Curriculum reform success stories at an “average” research university
2
Text/structure for an analysis course for students with pre-existing understanding of some applied aspects of analysis
27
Singular values of matrix sums
6
To what extent can algorithms in undergraduate linear algebra be made continuous/polynomial/etc.?
24
Why and how did preschemes become schemes?
27
Is “problem solving” a subject to be taught?
0
Application for functions of the shape $r = f(\theta)$
14
History of the abstract method in mathematics
43
Are hypergeometric series not taught often at universities nowadays, and if so, why?
Question feed