While thinking about this interesting question asked by Dylan Thurston, it occured to me that in every case that I know, the closer a knot diagram is to being alternating, the better its properties. For example, by the Tait Conjecture, a reduced diagram of an alternating link has the smallest number of crossings.

We can define the distance of a diagram from being alternating by a lexicographical ordering according to lengths of sequences of consecutive over/undercrossings. Other measures on non-alternating-ness are possible, but I'd like to ask about this "most naive" one.

Note that I'm not asking about diagrams in which various symmetries are visible, because then the statement would be false. For example, the following diagram for the figure eight knot illustrates its amphicheirality, but is not alternating: 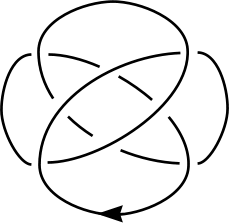 Essentially, the question is whether the more alternating a diagram is, the better it is as a diagram. Does this basically seem to be the case?

To reverse the question and to make it easier to answer precisely, an equivalent question is:

Is there an example of "less alternating" reduced diagram with a better property as a diagram (excluding visualization of symmetries) than any "more alternating" diagram of the same knot?

Please feel free to replace the word "knot" by "link", "virtual knot", "virtual link", or even "virtual tangle" in the above question.

EDIT: In looking at the literature, this observation is also attributed to Yasutaka Nakanishi, "Unknotting numbers and knot diagrams with the minimum crossings," Math. Sem. Notes Kobe Univ., 11(2):257–258, 1983.

Braid closure representations have a computational and notational advantage, even when they aren't alternating. Diagrams with the minimal bridge number are also usually not alternating, but make the fundamental group easier to compute.

60
Tying knots with reflecting lightrays
19
How many definitions are there of the Jones polynomial?
27
Does this knot invariant distinguish trefoil chiralities?
17
What is the state of the art for algorithmic knot simplification?
9
How many different knot types can have the same shadow (projection)
5
Upsilon of an alternating knot
13
Gap in Przytycki's computation of the skein module of links in a handlebody?
21
Presenting 3-manifolds by planar graphs
5
Non-alternating knot diagrams
Question feed