Can knot diagrams be monotonically simplified using under moves?

It is well known that knot diagrams cannot be monotonically simplified using Reidemeister moves. For instance, the Goeritz unknot cannot be directly simplified. On the other hand, there is a stronger move that 3-manifold topologists sometimes use, called the "under move": take a section of the knot that has only under crossings, and replace it with another under-strand connecting the same two endpoints. We can use this to simplify the Goeritz unknot one step: 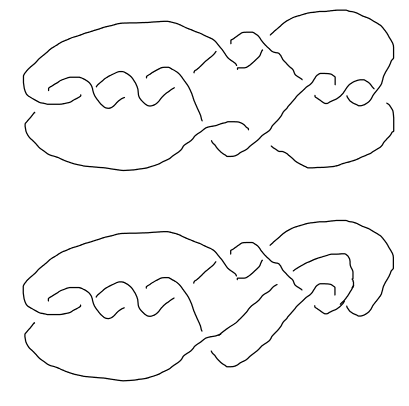 Question: Can every diagram of the unknot be monotonically simplified using only under moves (or maybe under and over moves)?

Probably one needs to allow level moves as well.

This is related to an earlier question: Are there any very hard unknots? My move is more precise than that one, and Haken's "Gordian knot" can be simplified at least one step using a few level under-moves and then a reducing under-move on the right-hand side.

(I was wondering about this during a talk by Prasolov on his amazing work with Dynnikov on similar questions in the context of grid diagrams. Surely someone has considered this before.)

This is just a comment. The same week (!) when Dylan asked this question, we received at our department a message from a non-professional mathematician who wrote a computer program that tries to simplify knots using level moves. (A "level move" is like an under move, but there can be more strands lying below the arc that you move.) He says that he tried all unknots he could find on the web and they can all be fully monotonically simplified in very little time (the crossing number strictly decreases at each step, as far as I see).

For instance, the Gordian knot (shown below) can be fully monotonically simplified using level moves. 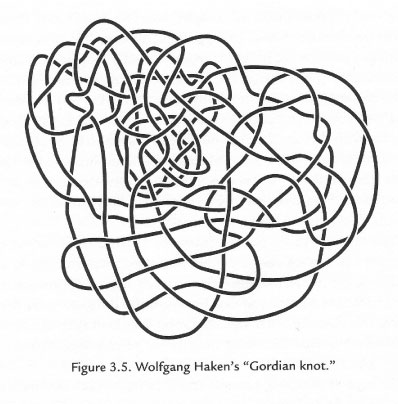 His program produces nice understandable pictures, and looking at them you can easily follow the moves that unknot the knot. These are available here

He actually wrote to us to ask for more examples to test the program with (there are not so many ready-to-use examples around), so if you know more hard unknots please share them (here or somewhere else)

I recall a discussion on this question on math.sci.research quite a few years ago. John Conway had tried various moves to supplement Reidemeister moves. If I recall correctly, his guess was that no finite collection of moves will give monotonic simplification.

The Goeritz unknot below admits a simplifying move along the dashed arc shown. If one takes its untwisted double (as Ryan suggested) one again gets an unknot. (I hope I got the twists right below, but if not then adding twists shouldn't hurt). I don't see any obvious simplifying moves, or even any helpful lateral moves, for the bottom diagram.

Added: Marco correctly points out that while the doubling construction destroys the simplification at top left, it does not kill the one at bottom right. There is nothing to stop one from doing an additional untwisted doubling, with the clasp put at lower right. Perhaps that will do the trick. 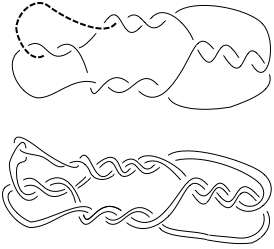