The distribution of the shortest path through $n$ points

In the big picture, I'd like to know: if I sample $n$ points uniformly at random in the unit square, what is the probability that the shortest path that visits each one of them is very small?

More precisely: if I sample $n$ points uniformly at random in the unit square, then it is known that as $n$ becomes large, the shortest path $L_n$ through these points satisfies

The distribution of the shortest path through $n$ points 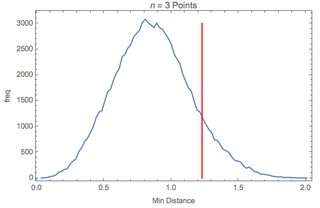 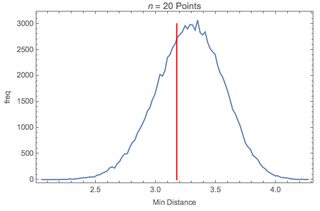 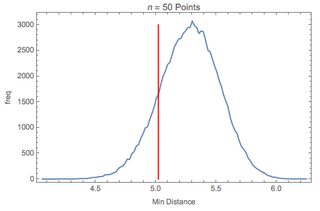 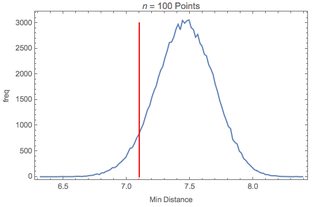 Even when $n = 100$, the stated asymptote of $0.71 \sqrt{n}$ leaves a substantial component of the distribution in the left tail, to the left of the asymptote. Depending on whether you are interested in large or small values of $n$, an exercise such as the above will provide a simple way to select your desired $c$, to minimise any left-tail probability. 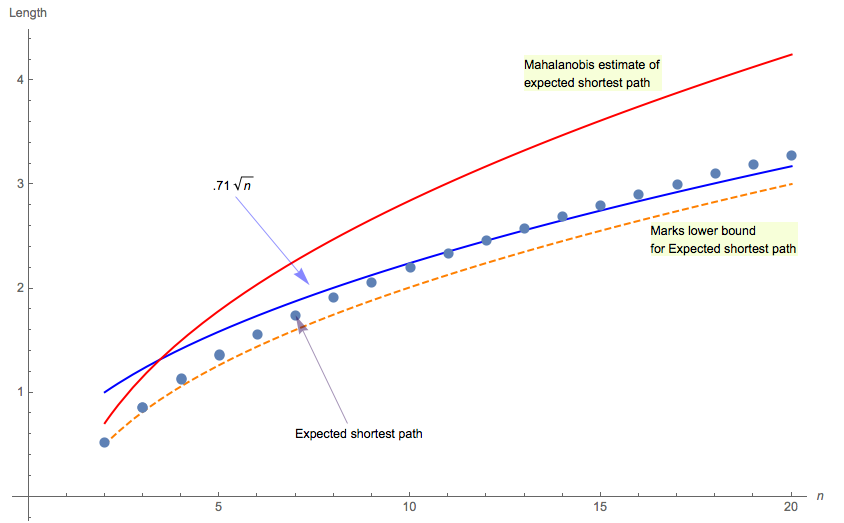 ... but, for your problem, you really should be looking at the distribution ... not just the first moment.

It seems that even the constant in front of the $\sqrt{n}$ is not known, but there are experimental results which seem to describe the distribution pretty well. In particular, it seems that the variance of the shortest path (however they compute it) is essentially $0.$ Anyway, look at the linked paper and the references therein.

Not the answer you're looking for? Browse other questions tagged pr.probability mg.metric-geometry oc.optimization-and-control convex-optimization geometric-probability or ask your own question.

3
The volume of a region arising from planar linkages

24
Shortest grid-graph paths with random diagonal shortcuts
11
Clique sizes in a unit disk graph
9
Fitting a mesh to a density function
2
Upper bounds on the worst-case traveling salesman tours in the unit square
1
Expected length of the shortest polygonal chain connecting N random points in the unit square
29
Shortest path through $\sqrt{n}$ points out of $n$
13
Shortest path through $n^{1/3}$ points out of $n$
7
Finding a short path using $(0.99n)!$ permutations
4
Distribution of the $pn$ shortest edges out of $n$ uniform points, $p\to 0$
4
What is the nearest-neighbor distribution in this picture?
Question feed