Random points on the unit sphere

(there seem to be a number of questions and references about points in polygons, but I seem to be failing to find anything on spheres...)

As mentioned in the comments, this question has been answered for random pointes on the boundary of convex bodies and even better for all intrinsic volumes. Let me offer some references:

A good refernce is:

The convex hull of $n$ independent random points chosen on the boundary of a convex body $K \subset \mathbb{R}^d$ according to a given density function is a random polytope. The expectation of its $i$-th intrinsic volume for $i=1, \dots, d$ is investigated. In the case that the boundary of $K$ is sufficiently smooth, asymptotic expansions for these expected intrinsic volumes as $n \to \infty$ are derived.

By Ross M. Richardson, Van H. Vu and Lei Wu there are two papers, which are very simlilar:

With the following abstract:

For convex bodies $K$ with $\mathcal{C}^2$ boundary in $\mathbb{R}^d$ , we explore random polytopes with vertices chosen along the boundary of $K$. In particular, we determine asymptotic properties of the volume of these random polytopes. We provide results concerning the variance and higher moments of this functional, as well as an analogous central limit theorem.

Another more recent reference is

Let $K$ be a convex body in $\mathbb{R}^d$, let $j\in\{1, ..., d-1\}$, and let $\varrho$ be a positive and continuous probability density function with respect to the $(d-1)$-dimensional Hausdorff measure on the boundary $\partial K$ of $K$. Denote by $K_n$ the convex hull of $n$ points chosen randomly and independently from $\partial K$ according to the probability distribution determined by $\varrho$. For the case when $\partial K$ is a $C^2$ submanifold of $\mathbb{R}^d$ with everywhere positive Gauss curvature, M. Reitzner proved an asymptotic formula for the expectation of the difference of the $j$th intrinsic volumes of $K$ and $K_n$, as $n\to\infty$. In this article, we extend this result to the case when the only condition on $K$ is that a ball rolls freely in $K$.

Average area (over $100$ trials) of $n$ points uniformly distributed on a unit-radius circle: 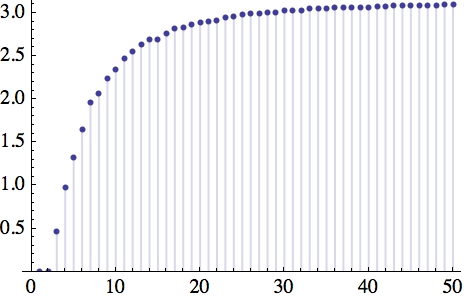 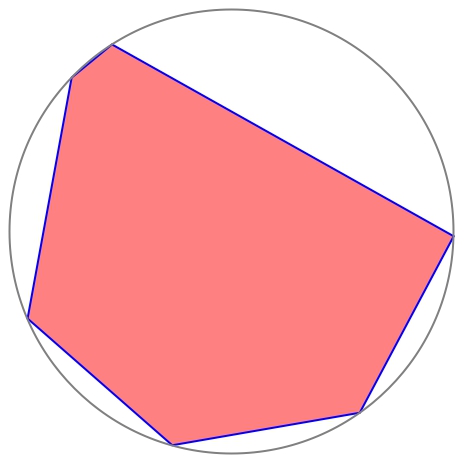 Not the answer you're looking for? Browse other questions tagged pr.probability combinatorial-geometry integral-geometry or ask your own question.

12
Convex hull of $k$ random points
2
Draw a Random Line Through a Voronoi Tessellation, What is the Average Number of Voronoi Cell the Line Intersects?
7
Expected minimum face angle of random convex polyhedron in $\mathbb{R}^3$
10
Intuition behind the spectral density of random matrices
20
Probability that a convex shape contains the unit ball
11
Limit of distance between two random points in a unit-radius $n$-sphere
8
Average size of extreme points of convex hull of $N$ points
Question feed