Q. How can a shortest lattice spiral that passes through every point of $S$ be found?

This 3rd condition may seem unnatural—and I am not certain I've captured it correctly—but is intended to exclude the right figure below: 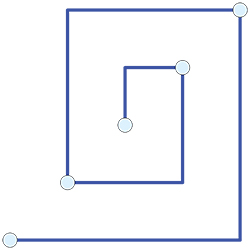 But in general, especially with many horizontal and vertical collinearities among the points of $S$, there are options, some shorter than others. E.g.:

My question is: Is there an efficient algorithm that will find a shortest spiral for a given $S$, where "shortest" is defined by the Euclidean length of the edges of the spiral? Are there properties of such a shortest spiral that could help avoid a brute-force search? (Another variant is to define length as the number of edges, ignoring their Euclidean length. The spiral right above is shorter in both senses.)

My question is inspired by (and hopefully easier than) some apparently difficult questions posed by Filip Morić, discussed in this recent paper:

(Added in response to a question). Not quite what I intended, but this is a spiral according to my definition: 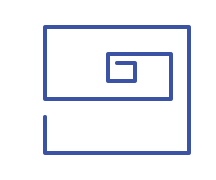 Given the handedness of the spiral and the direction of the spiral when hitting the last point, there is a unique spiral that passes through all the points. Enumerating the 8 possibilities yields the answer.

Assume without loss of generality that the spiral turns clockwise and ends facing south. Clearly, the spiral ends on a point in $p = (x, y) \in S$. No point can lie strictly to the east of $p$, and among points sharing the same ordinate, $p$ must be the southernmost. Thus, $p$ is determined uniquely.

If we remove $p$ from $S$, we can now determine the last point the spiral hit when it was headed east, prior to turning south. It is the northernmost, then easternmost point in the set.

Repeating the process, we exhaust all the points and determine the unique clockwise spiral that ends facing south.

The same process can be repeated for each direction, clockwise and counter clockwise and the length of the 8 spirals can be compared.

Not the answer you're looking for? Browse other questions tagged mg.metric-geometry discrete-geometry euclidean-lattices or ask your own question.

5
Doubly covering an even lattice
6
Bound on Minimal Length of Vectors in Lattice and its Dual Lattice
11
Wander distance of self-avoiding walk that backs out of culs-de-sac
38
Can we find lattice polyhedra with faces of area 1,2,3,...?
38
Shortest path connecting two opposite points on a cube
3
Minimum weight triangulation of lattice points in a circle
1
Lattice points in hypercubes
Question feed