Which criteria guarantee an orthogonal circuit in $\mathbb R^3$ to be rigid?

For $n\ge4$, define an orthogonal circuit or O-circuit as a closed circuit of $n$ unit segments in $\mathbb R^3$ such that any two neighboring segments form a right angle. (Physically this could be realized by $n$ rigid right-angled pairs of metal tubes, each with one leg slightly thicker than the other one, so that they can be sticked together like for the skeleton of a tent. Thus the segments can be "twisted", maintaining the right angles. We won't worry about the possibility that this object may intersect itself etc).

If such a circuit can be rotated in a way that each segment becomes parallel to one of the 3 coordinate axes, we'll say that it is fully orthogonal (FO). We can describe a FO-circuit in the obvious way by a "circular" word like xyXZYz, where uppercase letters mean the opposite directions. This word is far from unique, as permuting the coordinates, switching upper and lower case of any coordinate or reversing the whole word will still describe the topologically same circuit. In what follows, the symbols $a,b,c$ denote any permutation of three coordinate directions, one of each set $\{x,X\},\{y,Y\},\{z,Z\}$ respectively. E.g. any U-shaped path of 3 segments is captured by a subword abA, where we might as well say aBA or Aba etc., but not aba, which would describe a "zigzag" path instead.

I am interested in the question which criteria guarantee a given O-circuit to be rigid. Some easy conditions, each sufficient for violating rigidity, are:

As $n$ grows, there are so many degrees of freedom that heuristically, rigid O-circuits of length $n$ should be extremely scarce. For example, even $(xy)^kz (XY)^kZ$, which might seem a good candidate at first glance, is not rigid for $k\ge2$ (it satisfies condition 3, taking the first y and the first Y as the black parts). Or what about xyzXyzXyZXYZxYZxYz? I imagine that for the latter, if one seizes the corresponding metal construction at two well-chosen opposite vertices, it might be possible to 'twist' it, but I have no idea how to prove or disprove that (other than by manipulating a physical object).

For $n=9$, there is a highly symmetric O-circuit, but I'm not at all sure it is rigid: on a rhombicuboctahedron, consider the three squares adjacent to a triangle; their 9 outer edges form an O-circuit.
There should be O-circuits for $n=7$, but with little symmetry. (Note that they imply quadrilaterals of sides $1,\sqrt{2},\sqrt{2},\sqrt{2}$ in space.) Any idea about their rigidity?

If I haven't misunderstood your definitions, all O-circuits with $n\geq7$ segments are non-rigid.

In this answer, I will follow you in calling your structures "circuits", despite the fact that this conflicts with the term used for a minimal dependent set of constraints in rigidity theory. I think your circuits are examples of what have been called "molecular-hinge" structures (see section 5 of this survey by Whiteley). Because Whiteley's survey explains most of this fairly well, I'll be a bit sketchy below.

I will discuss a slightly generalized notion of circuit, where the segments are joined at arbitrary angles and don't have to be unit length. O-circuits then are a specialization of the notion of circuits.

A circuit that is generic in the usual sense of rigidity theory (e.g. one where the segments and angles between segments are chosen so that they are algebraically independent) is at least as rigid as your O-circuits. This is a consequence of the fact that at a generic point in the space of realizations of circuits, the constraints between degrees of freedom have the maximal possible rank over all realizations (and hence the least amount of degeneracy). Upon specializing to O-circuits, some of the constraints might become dependent, e.g. the examples 1-3 you give above, which will increase the flexibility. However, the number of independent constraints cannot possibly increase, so O-circuits cannot be more rigid than generic circuits.

This count is explained in section 6 of Whiteley's survey, though the molecular conjecture was not yet proven at the time. 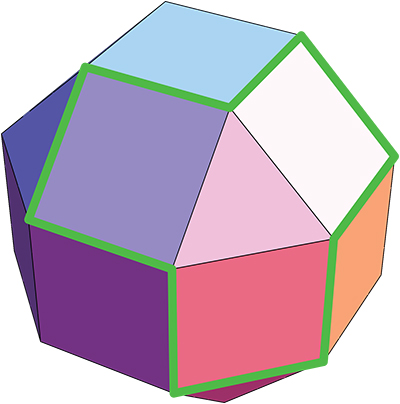 If anyone has K'nex handy, its (non)rigidity could be experimentally verified...
Share
Improve this answer
answered Sep 1 '14 at 18:20

Not the answer you're looking for? Browse other questions tagged co.combinatorics gt.geometric-topology mg.metric-geometry combinatorics-on-words rigidity or ask your own question.

19
Is a rhombus rigid on a sphere or torus? And generalizations
18
Subwords of the Fibonacci word
18
Cube-free infinite binary words
10
Ubiquitous Zimin words
8
A combinatorial problem concerned with logic circuits
3
Calculating the probability that all possible length $r$ subwords exists in a string, with or without overlaps allowed
14
Coxeter exchanges in non-reduced words
3
Edge colorability and Hamiltonicity of certain classes of cubic graphs (MO graphs)
10
Subwords of the infinite Fibonacci word
Question feed