Let $V_\rho\subset\mathbb{R}^2$ be a point set in the plane obtained from a Poisson process of density $\rho$. The random geometric graph $G_\rho$ is obtained from $V_\rho$ by connecting points that have Euclidean distance smaller than one. Let us assume that $\rho$ is larger than the critical density (in fact, we will later consider $\rho\to\infty$), such that there is a unique infinite component $G_{\rho}^0$. Let us assume w.l.o.g. that $0\in G_\rho^0$.

Using subadditive ergodic theory (Kingman, 1973) it has been shown that under mild conditions on $P(\tau_e)$ the passage time $T(x)$ almost surely scales linearly with $|x|$ in the large $|x|$ limit. However, to my knowledge no exact values for the scaling constant, which is often called the time constant, are known. The same seems to be true for the hop count constant $h_\rho$, i.e.

So how about the limiting situation $\rho\to\infty$, in which the connectivity becomes very large? Assuming that $P(\tau_e)$ is smooth and non-zero as $\tau_e\to 0$, the first passage time $T(x)$ will go to zero (when keeping $|x|$ fixed). However, the hop count $H(x)$ is by construction bounded from below by $\lceil|x|\rceil$.

Q1: Are any properties known about the time minimizing paths $\gamma$ in the $\rho\to\infty$ limit?

Numerical experiments suggest that $h_\infty:=\lim_{\rho\to\infty}h_\rho\approx 2$ independently of the distribution $P(\tau_e)$. Below are some examples of the time-minimizing paths (in blue) for $\rho=10,20,30,40$ and $P(\tau_e)$ the exponential distribution with mean 1. In each case the blue path is roughly twice as long as the shortest path (in red). 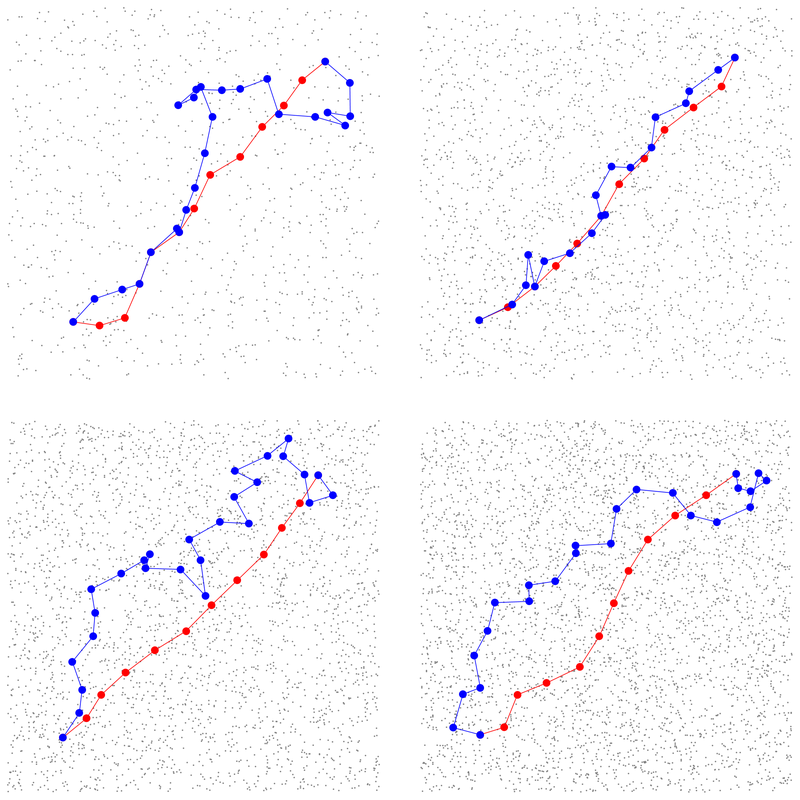 Note: So far the most relevant (recent) literature I have found is in applications to "Wireless sensor networks". Any pointers to more pure mathematics papers in which such hop counts are studied in plane graphs are most welcome.

Browse other questions tagged pr.probability random-graphs percolation or ask your own question.