For each of these two questions, one can assume that the arrangements are polycubes (for which a definition can be found in the excerpt-image below).

Question A. How does one arrange $n$ unit cubes to minimize surface area?

Question B. How does one arrange $n$ unit cubes to form a rectangular prism of minimal surface area?

Various curricular materials discuss this problem for a specific number of cubes, but I have not seen the general case broached. For an example of an exploration at the pre-secondary level, see this instructional plan from the National Council of Teachers of Mathematics. A recent example of the problem posed in generality can be found on this math education blog-post as well as here.

My own attempt at combing the literature did not produce anything of import. From the two dimensional perspective, I see a question in a somewhat similar vein on MSE about unit squares, and another 2D question on MO, but neither seems applicable to the questions above.

Moreover, there are some related results (recently relayed to me by a geometer-mathematician) in:

For example, see the excerpt below: 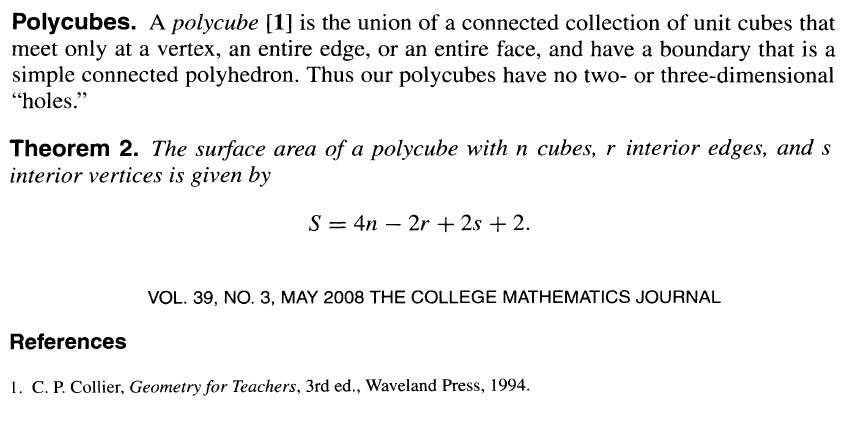 One might also check the OEIS sequence recommended by Robert Israel (or found by googling), though I cannot vouch for its validity (cf. e.g. the remarks of its contributor here).

Non-trivial bounds, algorithmic approaches, or other relevant remarks are all welcome!

One geometric remark (which is reminiscent of a symmetrization principle used in isoperimetric problems): a minimizing polycube may be chosen to lie in the first octant, with three sides tangent to the coordinate planes, and so that the number of cubes in each column is monotonic in each coordinate, like a lozenge tiling:

The point is that you can choose some direction to be the surface of the earth, and let gravity pull all of the cubes down. This does not increase the surface area: the result ends up with at most one bottom and top face in each column. In adjacent columns of height $m$ and $n$, the number of exposed faces is at least $|m-n|$, which is minimized when they are sitting flush. Repeat this in each direction, until the configuration is monotonic (like a 3-dimensional Young diagram, but I don't know if there's a mathematical label).

Added: This argument gives an interpretation for the desired minimization problem. One has a sequence of Young diagrams in three directions such that the total number of squares adds up to $n$, and which are monotonic in the number of squares in each diagram (with some compatibility conditions). Let the number of squares in the young diagram adjacent to each coordinate plane be $x_1, y_1, z_1$ respectively. Then the surface area is $2(x_1+y_1+z_1)$. This is counting twice the number of blue, red, and green squares (excluding the corners) in the picture (pictured are the top squares, to which there is a corresponding bottom square in each column). We have $x_1\geq x_2 \geq \cdots \geq x_k$, and $x_1+x_2+\cdots+x_k=n$, and corresponding formulae for $y_i$ and $z_i$ counting the number of squares in each tableau parallel to a given coordinate plane. It shouldn't be too hard to solve this combinatorial optimization problem, but I don't have time to work it out now.

Addendum 2: I think I can describe the optimal solution, but I don't have time to write down the complete argument now.

If you suppose that the cubes are shifted compared to each other by integers vectors (which might be not hard to prove), then a problem practically equivalent to Question A was solved by Bollobas and Leader in general for $d$ dimensions: http://link.springer.com/article/10.1007%2FBF01275667

There original problem was the following. The graph $G_d(k)$ has $k^d$ vertices which are associated to the points of a $d$-dimensional cubical grid of side length $k$ and the edges are given by the neighbors, e.g., every vertex not on a side has $2d$ neighbors. The edge neighborhood of a vertex set $S$ is the number of edges between $S$ and $V(G_d(k))\setminus S$. Determine the smallest possible neighborhood of $n$ vertices.

They have proved that it is (a) best solution to take the first $n$ unit cubes in the ``cubical order'' which is exactly the order how anyone would define it given the name - you want as few of the maximal valued coordinates as possible. Notice that their edge neighborhood would be exactly the area of the surface if the cubes were not on the boundary. The family about which they prove that it is extremal is shifted to the boundaries and is stair-convex, so its edge-boundary is exactly twice its surface. I don't see why their theorem rules out that another family could have a smaller surface, but their proof method (applying shifts) should work for this problem as well.

Not an answer, just an example that might provide some intuition. $n{=}9$:

Here are some ideas about the related question: for fixed $k$, how many cubes can you arrange while keeping the surface area $\leq k$?

A question fairly close to Question B was studied in [1] (JSTOR link here), which finds the choices of $n$ such that some volume-$n$ integer-side-length rectangular prism minimizes the volume/surface area ratio among all integer-side-length rectangular prisms with volume at most $n$.
Note, however, that on p. 194, Alspaugh notes that his/her method doesn't actually find the factorization $n = xyz$ that is optimal, and gives good examples of where the easy conjectures fail. Still, this should give you some bounds on the optimal volume/surface area ratio.

Not the answer you're looking for? Browse other questions tagged nt.number-theory reference-request discrete-geometry or ask your own question.

2
Minimizing the Perimeter of a polyomino

0
How many different rectangles (in terms of area) can fit in a 20-unit-wide square?
3
Maintaining boundary of unit circle arrangement
9
Complexity of the union of randomly rotated unit cubes
1
Reference question: Brownian motion and surface area
4
What is Known About the Complexity of Calculating Minimal Surface Polyhedra?
3
How many unit cubes to cover an annulus?
Question feed