What are TQFTs that are multiplicative under connected sums? Do bordisms with connected sum as monoidal product exist?

Some TQFTs, like the Crane-Yetter invariant (but not, say, the Turaev-Viro model) give manifold invariants that are multiplicative under connected sum $\#$.

One way to see this is to notice that they can be defined (for connected manifolds) with Kirby calculus: Given a manifold, choose a handle decomposition and consider its link diagram. The diagram is then labelled with morphisms from a ribbon fusion category and the whole diagram is evaluated as a morphism from the monoidal identity to itself, again a number. Now the evaluation of the disjoint union of two link diagrams must then give the product of the evaluations of the respective diagrams, since a ribbon fusion category is monoidal. But the disjoint union of two link diagrams of manifolds $M_1$ and $M_2$ is the link diagram of the connected sum $M_1 \# M_2$!

Which leads me to believe that this multiplicativity secretly comes from monoidality of some functor again. Is there a category of bordisms where the monoidal product of morphisms (=bordisms) is the connected sum, and not the disjoint union? Are such TQFTs actually monoidal functors from this bordism category to $\mathrm{Vect}$?

If the dimension of $Z(S^{n-1})$ is greater than 1, then the TQFT is not even approximately multiplicative under connect sum.

When $n$ is odd, the Euler characteristic of $S^n$ is zero and there is no way to tweak things so that $Z(S^n) = 1$. Turaev-Viro and Witten-REshetikhin-Tureav theories fall into this class.

I'll also remark that if $M_i$ is not connected, then $M_1 \sharp\, M_2$ is not well-defined, even up to homeomorphism. But nevertheless the above claims about $Z(M_1 \sharp\, M_2)$ are true, for any choice of the ambiguous connect sum.

According to the Manifold Atlas, connected sum is bordant to the disjoint union for fairly general classes of manifolds. The proof is more or less clear from the picture given there 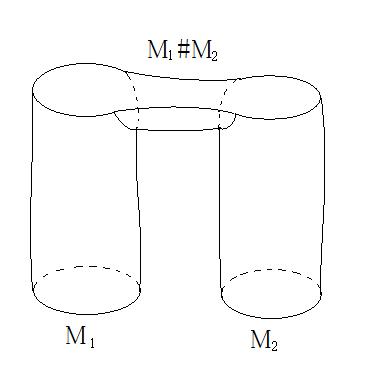 With slightly more care, I'm sure that the connected sum and the disjoint union are naturally isomorphic as bifunctors, so there is a monoidal structure wrt connected sum.

In any case, values of any QFT on the disjoint union and on the connected sum are "the same".

(Edit) The comments of Dan Petersen to the OP and of Qiaochu Yuan to this post indicate that this answer is not really correct. I am still leaving it since I still think that existence of the above bordism is relevant for the question.

5
Is there a quotient or exact sequence of symmetric, premodular (ribbon fusion) and modular categories?
13
Is a unitary Hamiltonian TQFT the same as a unitary axiomatic TQFT?
10
Which manifolds are sensitive to the cocycle in the Dijkgraaf-Witten model?
8
Is Yetter's invariant multiplicative under connected sum?
6
Does the Day convolution induce the structure of a bimonoidal category on $Fun(C,D)$?
14
Is there a PL, or topological, bordism hypothesis?
10
Are there 4d state sum models, extended TQFTs or chain mail invariant that detect smooth structures?
Question feed