Examples of research on how people perceive mathematical objects

What examples are there on research related to human perception and mathematical objects?

For example, the shape of a beer glass influences drinking habits, since people are bad at integrating.

There have been studies conducted, to determine what fractal dimension people prefer.

There is also a lot of research done on how people choose numerical passwords, or what people consider as "random numbers" and random sequences of numbers, but I am not looking for examples on how people handles randomness, or deal with strategies in a game.

What I am looking for is where math appears in relation to peoples' perception, such as in this example: there is a an interesting article on a mathematical model for "generating annoying, scratching sounds". The conclusion (conjecture) is that the boundary between order (sine wave) and chaos (white noise) is what make nails on a chalkboard so distinctively unpleasant. The researchers found that listening to the graph of the logistic map is highly unpleasant, while other more random, and more ordered functions did not have this property. The authors try to explain this experience by properties of the function they examine.

Another example is the mathematical model of the Droste effect. This model (based on complex analysis) was used to complete one of M.C Escher's famous paintings. I believe this is related to Escher's map.

Yet another example is the following 20-page paper, titled A mathematical theory of illusions and figural aftereffects, published in a Springer journal.

Also, a while back, a physicist posted The proof of innocence on arXiv, giving a mathematical model on why he (erroneously) got a traffic ticket, due to an optical illusion explainable by mathematics. From the abstract: The paper was awarded a special prize of $400 that the author did not have to pay to the state of California.

Some of the topics which are treated in considerable detail are the horopter problem (geodesic lines), the alley problem, and rigid transformations of the hyperbolic visual space. (...) Using the hyperbolic metric, the author calculates the shape of distorted rooms which are congruent to rectangular rooms, that is, rooms with distorted walls and windows which appear (under fixed conditions) to be identical to rectangular rooms with rectangular windows.

James Terrell (...) does away with an old prejudice held by practically all of us. We all believed that, according to special relativity, an object in motion appears to be contracted in the direction of motion by a factor $[1-(v/c)^2]^{1/2}$. A passenger in a fast space ship, looking out of the window, so it seemed to us, would see spherical objects contracted to ellipsoids. This is definitely not so according to Terrell's considerations, which for the special case of a sphere were also carried out by R. Penrose. The reason is quite simple. When we see or photograph an object, we record light quanta emitted by the object when they arrive simultaneously at the retina or at the photographic film. This implies that these light quanta have not been emitted simultaneously by all points of the object. (...) In special relativity, this distortion has the remarkable effect of canceling the Lorentz contraction so that objects appear undistorted but only rotated. This is exactly true only for objects which subtend a small solid angle.

The mirage phenomenon is because people perceive light rays as if they were always euclidean straight lines. This has inspired papers by some distinguished mathematicians:

An article in Science News 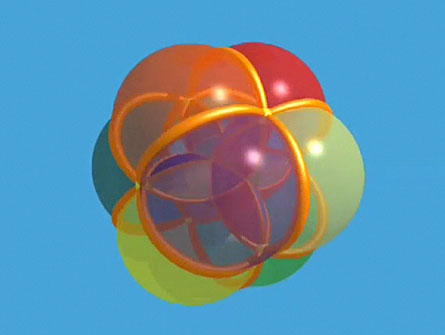 Jack Xin does research on mathematical modeling of human hearing. Here are his papers on the topic.

The golden ratio is often cited in research on pleasing shapes to the human eye in art and architecture. For example, see http://plus.maths.org/content/os/issue22/features/golden/index

56
What are some mathematical sculptures?

118
Examples of theorems misapplied to non-mathematical contexts
30
Research-level mathematical bookstores
11
Interesting examples of generic behavior of mathematical objects being either unreasonably structured or simply unreasonable
143
How does one justify funding for mathematics research?
2
How many persons pass your 1.5 meter neighbourhood during 1 week ? If the distribution is power law what is the exponent?
7
Abstract mathematical concepts/tools appeared in machine learning research
Question feed