I have two convex polyhedra such that their sums of side areas are equal. It is true that I can cut one of them and flatten it on the plane, then fold the flattened polygon to reach the other polyhedron?

For special case in which these two polyhedra are cube and regular tetrahedron, The answer in Yes I think. But I think the answer is "No, not necessarily" in general case, and I think the problem is difficult!

The general answer is sometimes Yes, various unfold/refold pairs of convex polyhedra exist, but not always, depending on what is meant by "cut." Here is an example that Erik Demaine, Marty Demaine, Anna Lubiw, and I worked out carefully:

The Latin-cross unfolding of the cube can refold into precisely 23 distinct convex polyhedra, as displayed below (all of the same surface area): the cube, two doubly covered flat quadrilaterals, seven tetrahedra, three pentahedra, each with one or more quadrilateral faces, four hexahedra, and six octahedra: 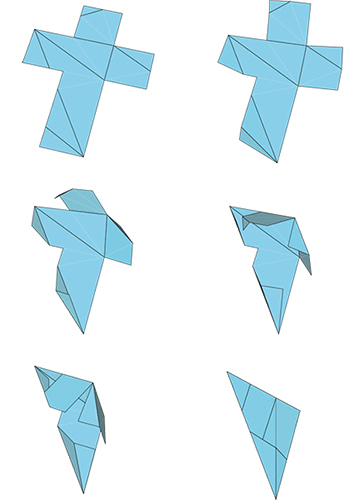 But if the cutting is restricted to follow edges of the convex polyhedron ("edge unfoldings"), then there are "refold-rigid" polyhedra. For example, each of the 43,380 edge unfoldings of a dodecahedron may only fold back to the dodecahedron.

Added. I apologize for not initially understanding Morteza's precise question, which asks whether or not, for any two given pair of convex polyhedra $P$ and $Q$ with the same surface area, is it always possible to cut open $P$ and refold to $Q$. This remains an open question as far as I know. It is a version of Open Problem 25.31 (Fold/Refold Dissections) in Geometric Folding Algorithms.
Share
Improve this answer
edited Sep 5 '17 at 11:10
answered Jul 28 '14 at 23:13

Not the answer you're looking for? Browse other questions tagged combinatorial-geometry polyhedra or ask your own question.