I'm looking for information on explicit cubic filled Julia sets with interesting properties such as:

I've skimmed the work of Branner and Hubbard (The iteration of cubic polynomials) but could not find explicit examples in the canonical forms $f(z)=z^3+az+b$ or $f(z)=z^3-3a^2z+b$.

I'm specially interested in telling apart cubic filled Julia sets that have one or two finite attractors (or periodic cycles). Since the parameter space in this case has four real dimensions, I'll settle for large open subsets for each possibility.

As Lasse suggests, you can draw pictures of the parameter space to help you explore the possible dynamic behavior of cubic polynomials. Any cubic polynomial is conjugate to some polynomial of the form $$f_{a,b} = z^3 - 3a^2z + b.$$ Thus, your parameter space is four-dimensional, depending on the two complex parameters $a$ and $b$. The two critical points are always $\pm a$, thus we might decompose ${\mathbb C}^2$ into the sets of points $(a,b)$ where:

For visualization purposes, we can fix one of $a$ or $b$ while letting the other vary within a rectangle, effectively generating a two-dimensional slice of the region. Here is such an image with $a=0.575$ while $b$ ranges within $[-1.5,1.5]\times[-1,1]$. Black indicates that the classification was unsuccessful. The image is animated with the Julia set being shown for 10 different choices of the parameter $b$.

I'm confident in the images. It's fairly easy, for example, to locate parameters corresponding to super-attracting orbits and to parametrize certain parts, as the main cardioid in the Mandelbrot set can be parametrized.

If we'd like to get a grip on the entire parameter space, we can generate a grid of images for different choices of $a$; within each image, $b$ varies. Here's such a grid: 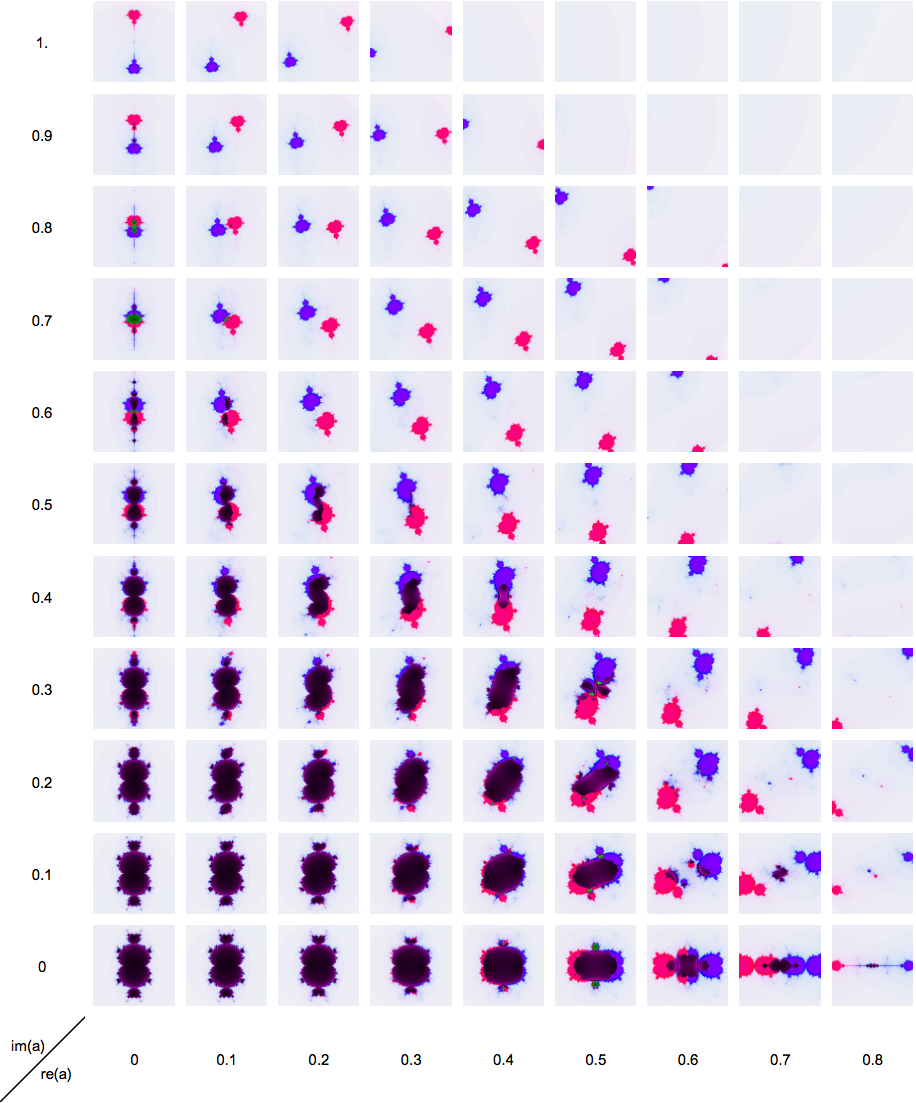 I implemented this all in Mathematica and would be happy to share the code.

For the first question it is enough to exhibit an explicit neighbourhood of $(i\frac{\sqrt{2}}{2},0)$ in which $z\mapsto z^3−3a^2z+b$ will have two fixed points where the derivative have modulus less than 1. For the second, p. 156 of the Branner-Hubbard paper gives a bound on the size of the Connectedness Locus: in particular, if $|a|>2$ or $|b|>128$ then the Julia set is disconnected. Take any $(a,b)$ with $b=2a^3+a$ so that the critical point $a$ is fixed, then look nearby to find similar maps with an attracting fixed point.

As Adam notes, having two different attracting orbits is an open property. (Moreover, these maps are stable, meaning that nearby functions have conjugate dynamics on their Julia sets.) He also gives a good way of finding explicit examples with one critical orbit diverging to infinity and having a finite periodic attracting cycle (hence disconnected but not totally disconnected Julia set).

If you would like to find a larger range of examples, then I would suggest at drawing pictures of suitable slices of parameter space. One example would be the space of real cubic polynomials, but of course you can also build one-dimensional complex spaces e.g. by introducing critical orbit relations.

You can easily write some simple heuristics to detect whether the critical points converge to attracting cycles or infinity, and if so, whether they have the same behaviour or not. Introduce a suitable colouring scheme, and this should allow you to find many different examples of the types of behaviour that you are seeking.