This is about properties of certain fractals defined by Lindenmayer systems, a.k.a. L-systems. Unlike “classical” fractals like Julia sets or the Mandelbrot set (the name “set” says it all), these fractals are not defined by calculus, but rather geometically, by iterating certain drawing procedures and resizing, which often results in a well-defined limit "curve." Some fractals, e.g. the well-known dragon curve, can be defined by very different L-systems.

I am mainly interested here in fractals where the self-similarity can be seen by decomposing shapes into smaller similar shapes (similar in the strict sense). Which angles can appear between similar shapes? E.g. for the Heighway dragon curve, it is easy to see directly from some of the L-system formulae defining it that these angles are $k\pi/8$.

Now I have encountered L-systems featuring angles which do not seem related to the one in the formula. E.g. for the following one, the angle between the biggest "hole" and the next-to-biggest one below it (colored blue) is about $70°$. (Note that it is smaller than $72°=2\pi/5$).

This fractal has been obtained by the formula

Or the following one where in the "tail" on the left, subsequent copies of the rectangle-like parts have an angle of about $9°$ to $10°$ between them.

This fractal can be obtained by the formula

It is clear that in both cases above, the formulae do not give any hint about this angle. But my question is:

Can it be shown that the angles occurring in fractals of this kind are always rational?

Similarly, we can wonder about the ratio of sizes among the similar copies contained in the fractal, say the smallest one which is $>1$. Based on some "easy" examples, where this ratio can be derived from the formula, I'd like to ask:

Is this ratio always an algebraic number?

These problems are fun...

Two of the methods to study self-similar sets are: the L-System (Lindenmayer System) and the IFS (iterated function system). To analyze this L-System, I first had to get the corresponding IFS. (Perhaps there are others who, to analyze an IFS, first convert it to an L-System...) 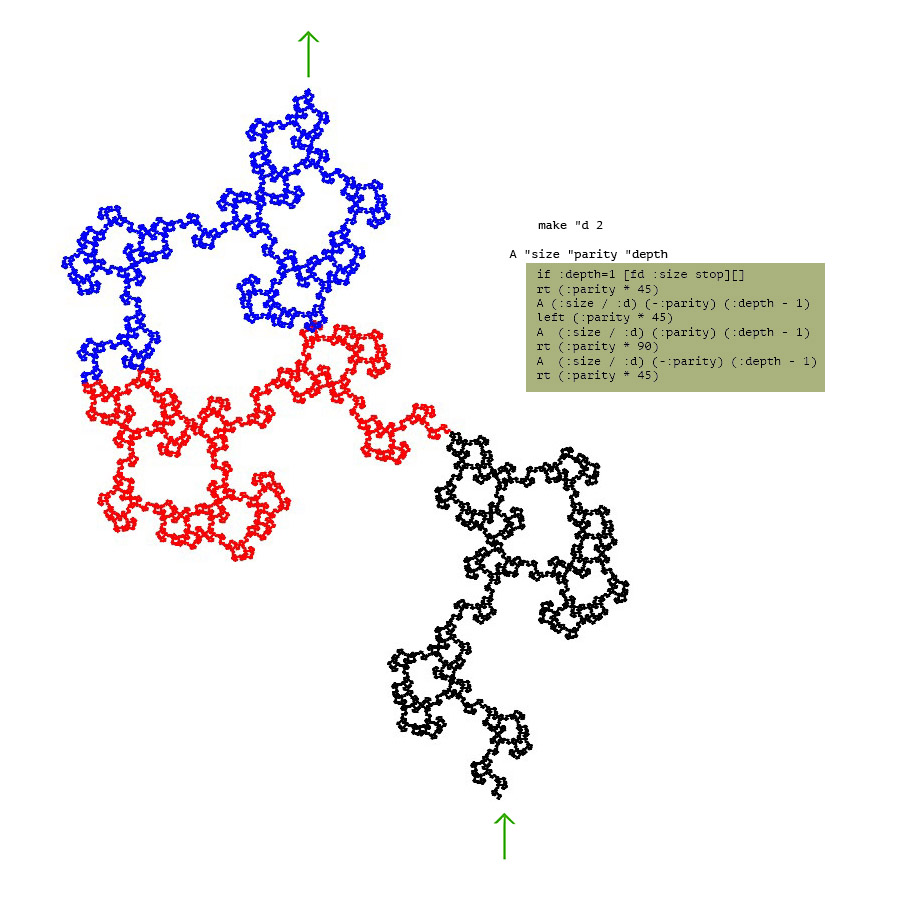 The factor $d=2$, comparing the size of the whole to the size of one of the three parts, was found by trial-and-error. If you make $d$ too large or too small, then higher iterates of the picture either grow without bound, or shrink to zero. But factor $2$ seems to keep them about the same size. The one in the picture shows what it looks like when depth is odd. The whole thing is made up of three parts, similar to the original (the first and third reflected). The orientation at the exit is the same as the orientation at the entry. 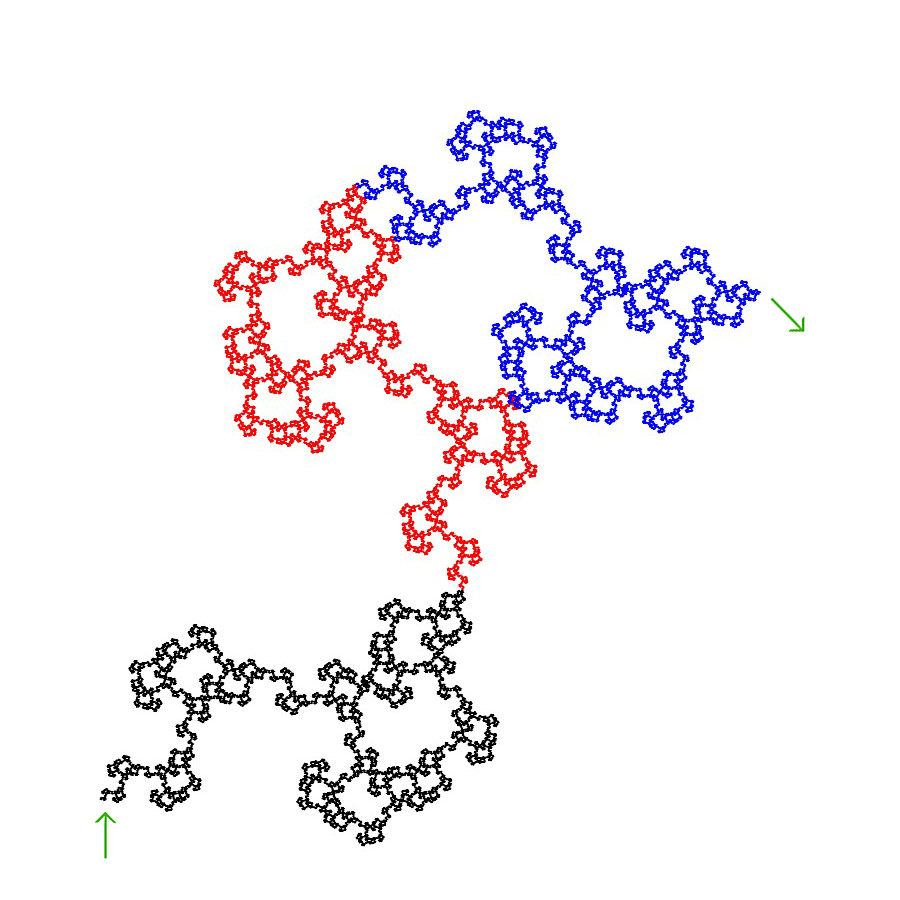 It looks exactly like an odd case, except rotated by a certain amount. (It turns out, rotated by that approximate 66 degrees described above.) And the exit orientation is rotated $-3\pi/4$ clockwise from the entry orientation. 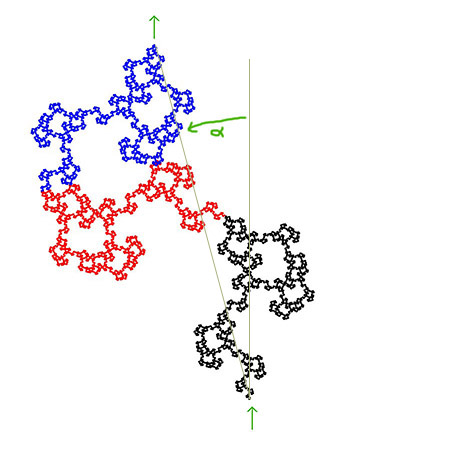 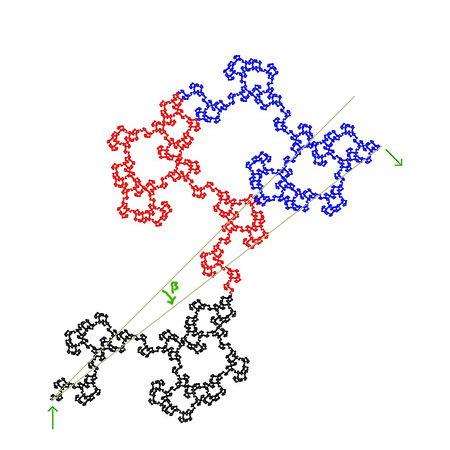 So let's analyze the odd picture into its three parts (which are even pictures, some reflected). (This picture is rotated $-\pi/2$ since I want to use complex numbers to do my trigonometry: the entry direction is complex number $1$, represented as a vector pointing to the right.) 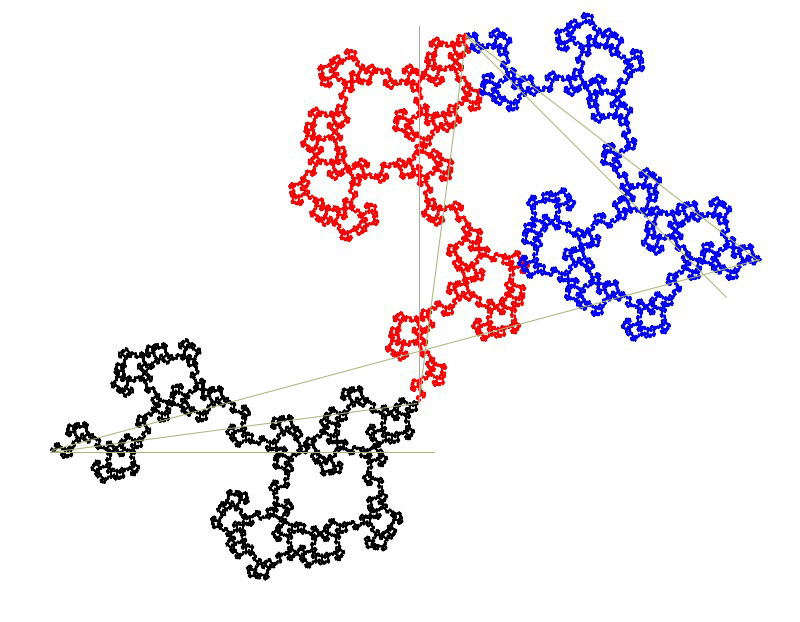 So, to verify the $66$ degree answer: Here is a large picture on the right, then the same picture rotated $66$ degrees and shrunk by fator $1/2$ on the left. Two of the lakes are colored to help comparing them (for size and orientation). 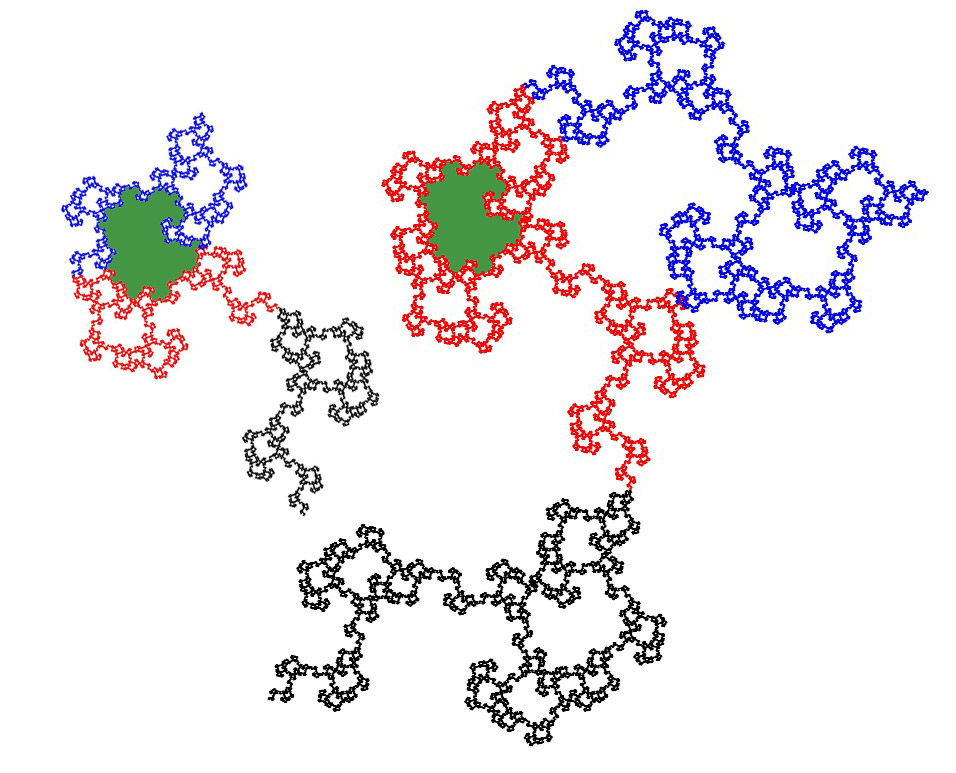 In a IFS implementation of a rep-n-tile an angle can be defined by cos ω = m/(2*sqrt(n)), m an integer. The possible rotations of elements of the rep-n-tile with respect to the tile depends on whether it is based on a rhombic, square or hexagonal lattice.

For a rhombic lattice the rotation can be ω or ω+π.

My impression is that if you relax the requirement that the curve fills the plane there is no general restriction on angles. For example, take the Koch curve. You can continually adjust this by widening the base and reducing the height of the middle pair of elements.

Not the answer you're looking for? Browse other questions tagged ds.dynamical-systems fractals or ask your own question.

14
sequences with a fractal dimension
9
Relationship between fractal dimension and Hurst exponent
3
Existence and Properties of 3D Curves with unusual 2D $(\kappa(s),\tau(s))$ Trajectories
5
Singular distributions: Applications and Instances
13
On the boundary of the twindragon
11
Self-Similar Graphs
12
Algorithm for computing external angles for the Mandelbrot set
Question feed